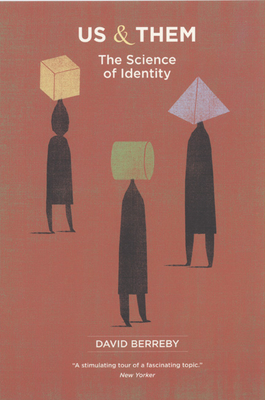 The Science of Identity

Democrat and Republican. Meat Eaters and Vegetarians. Black and White. As human beings we sort ourselves into groups. And once we identify ourselves as a member of a particular group—say, Red Sox fans—we tend to feel more comfortable with others of our own kind, rather than, say, Yankees fans. Yet we all belong to multiple groups at the same time—one might be a woman, a mother, an American, a violinist. How do we decide which identities matter and why they matter so much? And what makes us willing to die for, or to kill for, a religion, a nation, or a race?
In this award-winning book, David Berreby describes how twenty-first-century science is addressing these age-old questions. Ably linking neuroscience, social psychology, anthropology, and other fields, Us and Them investigates humanity’s “tribal mind” and how this alters our thoughts, affects our health, and is manipulated for good and ill. From the medical effects of stress to the rhetoric of politics, our perceptions of group identity affect every part of our lives. Science, Berreby argues, shows how this part of human nature is both unexpectedly important and surprisingly misunderstood.
Humans need our tribal sense—it tells us who we are, how we should behave, and links us to others as well as the past and future. Some condemn this instinct, while others celebrate it. Berreby offers in Us and Them a third alternative: how we can accept and understand our inescapable tribal mind.
“[A] brave book. . . . Berreby’s quest is to understand what he sees as a fundamental human urge to classify and identify with ‘human kinds.’”—Henry Gee, Scientific American

Praise For Us and Them: The Science of Identity…

"At over 300 pages of densely packed, scholarly-yet-accessible text Us & Them takes focused attention. Bereby takes his time and makes his case. If you read Malcolm Gladwell's breezy bestseller, Blink, and wanted a meatier discussion of the same points, Us & Them will satisfy."
— Jodi Forschmeidt

“What exactly is this seemingly natural tendency to sort others into ‘kinds’? This question forms the core of Us and Them, which explores the conscious and unconscious ways in which people classify one another—and more important—why.”
— Richard Lipkin

“We leap to categorize people. . . . Berreby uses mind and brain science to investigate why the human tendency to typecast is so powerful—and apparently so automatic.”

“[A] brave book. . . . Berreby’s quest is to understand what he sees as a fundamental human urge to classify and identify with ‘human kinds.’”
— Henry Gee

David Berreby has written about the intersection of science, culture, and politics for The New York Times, The New York Times Magazine, The New Republic, Slate, Discover, Smithsonian, The Sciences and many other publications. He lives in Brooklyn, New York.
Loading...
or support indie stores by buying on