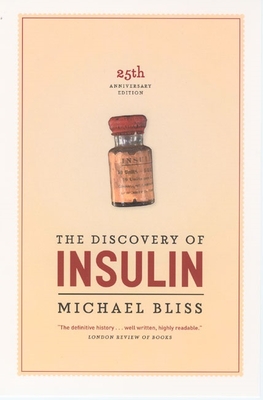 The Discovery of Insulin

When insulin was discovered in the early 1920s, even jaded professionals marveled at how it brought starved, sometimes comatose diabetics back to life. In the twenty-fifth-anniversary edition of a classic, Michael Bliss unearths scientists' memoirs and confidential appraisals of insulin by members of the Nobel Committee. he also resolves a longstanding controversy about scientific collaboration at its most fractious and fascinating: who ultimately deserves credit for the discovery? Bliss's life-and-death saga illuminates one of the most important breakthroughs in the history of medicine.

Praise For The Discovery of Insulin: Twenty-fifth Anniversary Edition…

The story of insulin's discovery out to be a novel...but Michael Bliss's splendid account is just as absorbing as any fiction.
— I S I S

Using previously unpublished, suppressed, or privately circulated documents, Bliss sets forth the full story of the epochal discovery. It is a tale of frustration, tension, and acute personal rivalry...The book has moments of pure delight.
— Peter H. Desmond

The new, twenty-fifth-anniversary edition of The Discovery of Insulin kept me...riveted with Michael Bliss's documentation, chock-full of jealousy, pride, and intrigue. [This book] is a must read for all of those whose lives have been touched by diabetes.
— Lois Jovanovic, MD, CEO and Chief Scientific Officer

Few events in modern medical history were as dramatic as the discovery of insulin, and fewer still are the books that have captured a medical breakthrough as brilliantly as Michael Bliss's classic account. Today, when the expectations of post-genomic medicine have reached new heights, the timing for a twenty-fifth-anniversary edition could not be better.
— David Naylor, MD, President and Former Dean of Medicine

Bliss provides a breathtaking account of what it really means to be on the cutting edge of scientific discovery.
— James Shapiro, MD, Director of the Clinical Islet Translplant Program

Michael Bliss is University Professor Emeritus at the University of Toronto, a recipient of the Order of Canada, and an honorary Fellow of the Royal College of Physicians and Surgeons of Canada. He is the award-winning author of many books, including The Discovery of Insulin, William Osler: A Life in Medicine, and Harvey Cushing: A Life in Surgery.