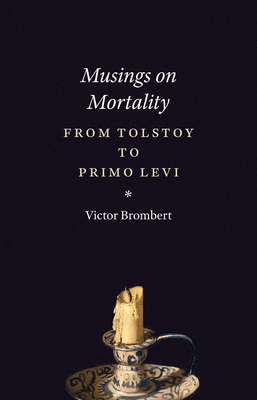 From Tolstoy to Primo Levi

“All art and the love of art,” Victor Brombert writes at the beginning of the deeply personal Musings on Mortality, “allow us to negate our nothingness.” As a young man returning from World War II, Brombert came to understand this truth as he immersed himself in literature. Death can be found everywhere in literature, he saw, but literature itself is on the side of life. With delicacy and penetrating insight, Brombert traces the theme of mortality in the work of a group of authors who wrote during the past century and a half, teasing out and comparing their views of death as they emerged from vastly different cultural contexts.

Leo Tolstoy, Thomas Mann, Franz Kafka, Virginia Woolf, Albert Camus, Giorgio Bassani, J. M. Coetzee, and Primo Levi—these are the writers whose works Brombert plumbs, illuminating their views on the meaning of life and the human condition. But there is more to their work, he shows, than a pervasive interest in mortality: they wrote not only of physical death but also of the threat of moral and spiritual death—and as the twentieth century progressed, they increasingly reflected on the traumatic events of their times and the growing sense of a collective historical tragedy. He probes the individual struggle with death, for example, through Tolstoy’s Ivan Ilych and Mann’s Aschenbach, while he explores the destruction of whole civilizations in Bassani, Camus, and Primo Levi. For Kafka and Woolf, writing seems to hold the promise of salvation, though that promise is seen as ambiguous and even deceptive, while Coetzee, writing about violence and apartheid South Africa, is deeply concerned with a sense of disgrace. Throughout the book, Brombert roots these writers’ reflections in philosophical meditations on mortality. Ultimately, he reveals that by understanding how these authors wrote about mortality, we can grasp the full scope of their literary achievement and vision.
Drawing deeply from the well of Brombert’s own experience, Musings on Mortality is more than mere literary criticism: it is a moving and elegant book for all to learn and live by.

Victor Brombert is the Henry Putnam University Professor Emeritus of Romance and Comparative Literatures at Princeton University. He is the author of many books, including In Praise of Antiheroes: Figures and Themes in Modern European Literature, 1830–l980, also published by the University of Chicago Press, and the wartime memoir Trains of Thought.

Praise For Musings on Mortality: From Tolstoy to Primo Levi…

“Musings on Mortality is a book suffused with wisdom and argued with the strong hand of a weathered and feeling literary scholar. To treat such tragic and inconsolable subject matter with such clarity and respect, with such equanimity and understanding, is to levitate above it, in stoic courage and willed serenity. It is hard to imagine such thematic criticism being done better than here. What a beautiful book.”
— Thomas Harrison, author of 1910: The Emancipation of Dissonance

“A brave and eloquent book devoted to what André Malraux called ‘negating nothingness.’ Victor Brombert moves gracefully from Tolstoy, though Kafka, Coetzee, and others, to Primo Levi in a meditation that is both engaging and profound, highly erudite, and completely personal.”
— Peter Brooks, author of Henry James Goes to Paris

“This book offers a unique pleasure—a sustained conversation with one of the most learned and wise critics of our age about the great defining truth of human existence: the persistent awareness of mortality. Full of life, it is self-consciously the musings of old age, of a man who has spent decades with the consolations and discomforts of literature as it engages with death.”
— Thomas Laqueur, author of Solitary Sex

“With sensitivity and insight, Princeton University emeritus literature professor Brombert studies the work of eight 20th-century authors and their literary approaches to mortality and death. . . . The simplicity and directness of Brombert’s style gives his discussion of the philosophical and aesthetic underpinnings of the works under scrutiny great clarity, and his study of the authors in their native languages allows him to discuss nuances of the text that might otherwise have been lost in translation.”
— Publishers Weekly

“Albert Camus’s The Plague, Thomas Mann’s doomed aesthete Aschenbach from Death in Venice, Primo Levi’s Survival in Auschwitz, and the writings of Franz Kafka, Virginia Woolf, and J.M. Coetzee are all examined by this distinguished scholar in exemplary essays that reflect the authors’ different fears and hopes. Brombert’s eloquently written book is for serious lovers of literature.”
— Library Journal

“It is clear that Brombert, a fine scholar and critic, is also an inspiring teacher. . . . The moments when Brombert engages in autobiographical reminiscence or tells anecdotes about his students are delightful and instructive.”
— Times Higher Education

“An eloquent and stylish book of high-end, close literary criticism. . . . Brombert’s examination of each author’s work is the epitome of academic objectivity and the product of a lifetime of dedicated scholarship and extraordinarily wide reading. . . . The exploration of the authors’ ideas, their personal circumstances and especially their works—all classics—invite further reading.”
— The Australian

“Brombert’s thoughtful observations on the finite nature of existence make for interesting reading.”
— The National

“Musings on Mortality is an invitation to learn gladly from a deeply cultured man who would gladly teach. [Brombert’s] lesson, to use his own words about Primo Levi, is a ‘lesson in human dignity.’ And among the dignities of man, as Victor Brombert convincingly demonstrates, is the serious discussion of serious literature, which treats it as having something wroth saying to those who would only listen.”
— D. G. Myers

“This handsome, compact book is, in fact, a work of elegant, beautifully written literary criticism, examining how eight major writers—‘From Tolstoy to Primo Levi’—dealt with death in their fiction. It offers the highly distilled insights of a master teacher.”
— Michael Dirda

“In these essays, Brombert reads these writers’ oeuvres closely with a judicious and restrained eye towards biographical influence and sets them within their larger historical contexts.”

“Much more than mere ‘musings on mortality.’”