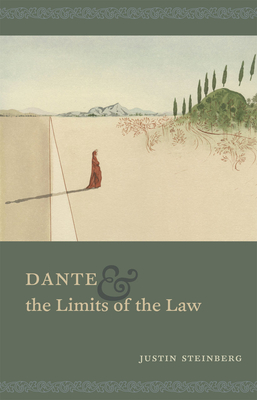 Dante and the Limits of the Law

In Dante and the Limits of the Law, Justin Steinberg offers the first comprehensive study of the legal structure essential to Dante’s Divine Comedy. Steinberg reveals how Dante imagines an afterlife dominated by sophisticated laws, hierarchical jurisdictions, and rationalized punishments and rewards. He makes the compelling case that Dante deliberately exploits this highly structured legal system to explore the phenomenon of exceptions to it, crucially introducing Dante to current debates about literature’s relation to law, exceptionality, and sovereignty.

Examining how Dante probes the limits of the law in this juridical otherworld, Steinberg argues that exceptions were vital to the medieval legal order and that Dante’s otherworld represents an ideal “system of exception.” In the real world, Dante saw this system as increasingly threatened by the dual crises of church and empire: the abuses and overreaching of the popes and the absence of an effective Holy Roman Emperor. Steinberg shows that Dante’s imagination of the afterlife seeks to address this gap between the universal validity of Roman law and the lack of a sovereign power to enforce it. Exploring the institutional role of disgrace, the entwined phenomena of judicial discretion and artistic freedom, medieval ideas about privilege and immunity, and the place of judgment in the poem, this cogently argued book brings to life Dante’s sense of justice.


Praise For Dante and the Limits of the Law…

“The best book on Dante to appear in years. . . . A good book is one whose lessons seem obvious in retrospect. Only after reading Dante and the Limits of the Law does it become clear that, if we don’t know much about medieval laws of infamy (“infamy of fact,” “infamy of law,” and “infamy of punishment”), we will not fully understand what Dante means by the “law of counter-suffering” (la legge del contrapasso) that governs the forms of punishment in Inferno.”

“Combining close textual reading (chiefly of the Divine Comedy) with erudite excursions into legal history . . . Steinberg mounts a persuasive defense of his opening assertion that ‘Dante’s literary-theoretical framework is simultaneously and manifestly a legal one.’ . . . Recommended.”
— Choice

“Fascinating. . . . Steinberg’s ability to ferret out legal issues where none were previously evident is part of what makes this book such a pleasure. His extensive knowledge of medieval legal theory facilitates connections that others have missed. Often he turns his attention to some of the Comedy’s most compelling episodes, offering new and startlingly sensible, even exhilarating, answers to problems that have tied readers in knots. His attention to Dante’s specific language reveals that many of the answers he now delivers were hiding in plain sight, awaiting his perspicacious eye. . . . To borrow an image from Dante, Steinberg offers a full four-course meal, one that sates without being heavy, and on which the reader may later reflect with renewed pleasure.”

“Steinberg writes extraordinarily well, economically and elegantly getting to the point. . . . [A] truly excellent book.”

“A short review cannot address the full range of aspects of Dante’s poetics, many of them highly complex and critically contentious, with which Steinberg engages over the course of this important study. His close readings and interpretations are invariably astute and persuasive, and his prose elegant and concise. Steinberg’s approach unquestionably reinvigorates the poem.”

“Excellent. . . . This book makes an important contribution to the growing body of law and humanities scholarship that is recuperating and celebrating the jurisprudential richness of pre-modern law and pre-modern legal practice.”

— Law, Culture and the Humanities

“Written with grit and polemical brio, Justin Steinberg’s book takes readers into the technical world of medieval legal conventions as they appear and even shape the vast and detailed legal system of Dante’s Divine Comedy. Filling a substantial lacuna in the critical bibliography of the poem, the cogent and absolutely persuasive Dante and the Limits of the Law makes a significant contribution to our understanding of the poem.”
— Giuseppe Mazzotta, Yale University

“At once magisterial and cutting edge, Dante and the Limits of the Law reconsiders Dante’s Commedia through the prisms of both informed close reading and broad knowledge of historical context. Situating the poem within the legal culture of its day, Justin Steinberg persuasively illuminates a text driven by an understanding of justice, indeed structured by a meting out of punishment and reward.  Steinberg’s work, both here and in his earlier Accounting for Dante, clearly places him at the forefront of new scholarship in the field.”
— Nancy J. Vickers, Bryn Mawr College

“Dante and the Limits of the Law gives us a picture of Dante whose relation to the law is not doctrinal but fundamentally critical and inventive. In Justin Steinberg’s expert reading, Dante probes the limits of the law to give us a sophisticated and unique reflection on punishment, liberty, contracts, and legal privilege, and on the relation of all of these to vernacular literature. Impressive and elegantly argued, this book persuasively brings to life Dante’s sense of justice and legal crisis as well as the highly experimental nature of his poetry.”
— Graham Hammill, author of The Mosaic Constitution

Justin Steinberg is professor of Italian literature in the Department of Romance Languages and Literatures at the University of Chicago. He is the author of Accounting for Dante: Urban Readers and Writers in Late Medieval Italy and editor of the journal Dante Studies. He lives in Chicago.
Loading...
or
Not Currently Available for Direct Purchase