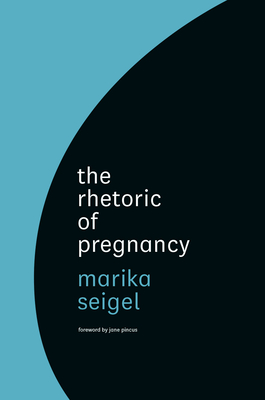 The Rhetoric of Pregnancy

It is a truth widely acknowledged that if you’re pregnant and can afford one, you’re going to pick up a pregnancy manual. From What to Expect When You’re Expecting to Pregnancy for Dummies, these guides act as portable mentors for women who want advice on how to navigate each stage of pregnancy. Yet few women consider the effect of these manuals—how they propel their readers into a particular system of care or whether the manual they choose reflects or contradicts current medical thinking.
Using a sophisticated rhetorical analysis, Marika Seigel works to deconstruct pregnancy manuals while also identifying ways to improve communication about pregnancy and healthcare. She traces the manuals’ evolution from early twentieth-century tomes that instructed readers to unquestioningly turn their pregnancy management over to doctors, to those of the women’s health movement that encouraged readers to engage more critically with their care, to modern online sources that sometimes serve commercial interests as much as the mother’s.

The first book-length study of its kind, The Rhetoric of Pregnancy is a must-read for both users and designers of our prenatal systems—doctors and doulas, scholars and activists, and anyone interested in encouraging active, effective engagement.

Praise For The Rhetoric of Pregnancy…

"Rich and eye-opening."
— London School of Economics Review of Books

"Seigel contends the work of pregnancy ‘has material consequences on women’s bodies and ways of living.' Her book rearticulates this work, but she also rearticulates the work of usability, making recommendations to technical communicators to help them write documents that can provide critical access to technological systems such as the prenatal care system."
— Technical Communication Quarterly

"The Rhetoric of Pregnancy provides an enviable model for what perceptive, informative, and highly accessible activist scholarship can look like."
— College English

"The Rhetoric of Pregnancy . . . interrogates the medical system that has transformed pregnancy into a solely medical event equipped with machines and procedures. Seigel’s investigation of pregnancy manuals that perpetuate 'functional rather than critical access'highlights the ways in which our current medical system does not allow women choice before, during, and after pregnancy. By the end of The Rhetoric of Pregnancy, Seigel has provided an alternative: for women to create pregnancy manuals that question the system and to engage and disengage based on free will rather than being obliged to simply follow the instructions."

"A powerful rhetorical study of the advice given to women when they are pregnant. . . . Although the book constructs its analysis with theoretical terms, it’s still very approachable and understandable for the lay person."
— Midwifery Today

“The Rhetoric of Pregnancy connects and extends important scholarly conversations while advancing the ethical development of technical documentation and the practices (health care and otherwise) this documentation shapes. Practitioners, advocates, and pregnant women themselves will find this book accessible and instructive.”
— J. Blake Scott, author of Risky Rhetoric: AIDS and the Cultural Practices of HIV Testing

“Seigel argues eloquently for the need to change the current US system of prenatal care, labor, and delivery, and she does so in terms that will resonate with policy makers, health care professionals, and the expecting mothers who are the most important stakeholders in this situation. She incorporates key concepts from technical communication to shed light on the rhetorical function of pregnancy manuals as documents that not only instruct women how to do the work of pregnancy, labor, and delivery but also rhetorically construct the female reproductive body in a particular way. The book will make important contributions to scholarly conversations in technical communication, medical rhetoric, and women’s studies.”
— Amy Koerber, Texas Tech University

"It is only once commonsense ideas stop “making sense” that we can see the power at work in keeping certain associations and assumptions in play. Seigel’s study unveils this power by reading the cultural history of pregnancy manuals and deconstructing their logic. In the end, this deconstruction allows her to conclude that it is not only necessary, but also possible to create mainstream pregnancy manuals that facilitate empowering birth experiences. That she is able to claim this in a way that makes room for those who design, write, and publish pregnancy manuals to consider the wider implications of their rhetoric, and perhaps even feel motivated to examine their language, is one of the things that makes this book truly remarkable."
— Configurations

"Accessible to the general reader and the graduate student as well as the established scholar, Seigel’s book on the rhetoric of pregnancy applies usability theory, articulation theory, and Kenneth Burke’s 'pieties' to trace historically the rhetoric of prenatal care within the United States."
— Rhetoric Society Quarterly

"Seigel makes several significant contributions to feminist and women’s rhetorical studies. By tracing and deconstructing the rhetoric of women’s prenatal health care, Seigel exposes how social and political institutions and technological systems have defined negative and faulty cultural perceptions of pregnant bodies as sites of social and political risk in need of surveillance. . . . Seigel makes an important feminist move by calling attention to the existence of and possibility for future documentation that creates—or recovers— pieties that empower women through critical and transformative access to socially, politically, and technologically driven systems of prenatal care."
— Sarah R. Spangler

"Methodologically and politically, this book is an important intervention into the increasingly commodified and medicalized prenatal care system and contributes to ongoing scholarly conversations about reproductive rights discourse within feminist studies."
— Women's Studies in Communication

Marika Seigelis associate professor of rhetoric and technical communication at Michigan Technological University. She lives in Houghton, MI.
Loading...
or
Not Currently Available for Direct Purchase