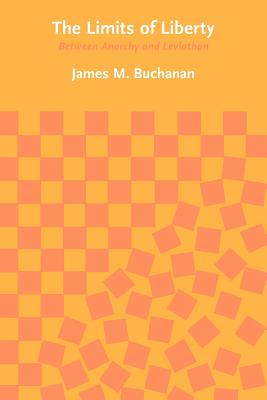 The Limits of Liberty

Between Anarchy and Leviathan

"The Limits of Liberty is concerned mainly with two topics. One is an attempt to construct a new contractarian theory of the state, and the other deals with its legitimate limits. The latter is a matter of great practical importance and is of no small significance from the standpoint of political philosophy."—Scott Gordon, Journal of Political Economy

James Buchanan offers a strikingly innovative approach to a pervasive problem of social philosophy. The problem is one of the classic paradoxes concerning man's freedom in society: in order to protect individual freedom, the state must restrict each person's right to act. Employing the techniques of modern economic analysis, Professor Buchanan reveals the conceptual basis of an individual's social rights by examining the evolution and development of these rights out of presocial conditions.

James M. Buchanan (1919-2013) was Professor Emeritus and Advisory General Director of the James Buchanan Center for Political Economy at George Mason University, where he also established the Center for the Study of Public Choice. He authored several books, including his most famous work, The Calculus of Consent, which he co-authored with Gordon Tullock. Buchanan was awarded the Nobel Prize in Economics in 1986 for his work in public choice theory.