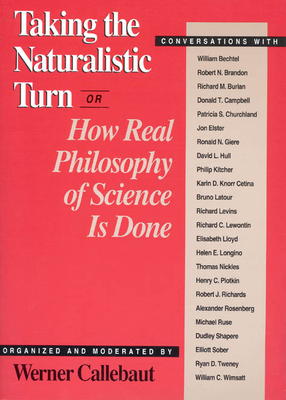 Taking the Naturalistic Turn, Or How Real Philosophy of Science Is Done (Science and Its Conceptual Foundations series)

Philosophers of science traditionally have ignored the details of scientific research, and the result has often been theories that lack relevance either to science or to philosophy in general. In this volume, leading philosophers of biology discuss the limitations of this tradition and the advantages of the "naturalistic turn"—the idea that the study of science is itself a scientific enterprise and should be conducted accordingly.

This innovative book presents candid, informal debates among scholars who examine the benefits and problems of studying science in the same way that scientists study the natural world. Callebaut achieves the effect of face-to-face engagement through separate interviews with participants.

"Why can't we have both theoretical ecology and natural histories, lovingly done?"—Philip Kitcher

Werner Callebaut is associate professor of philosophy in the Department of Social Sciences, Humanities, and Communication of Limburgs Universitair Centrum, Belgium, and assistant professor in the Department of Philosophy of the Rijksuniversiteit Limburg, The Netherlands.
Loading...
or
Not Currently Available for Direct Purchase