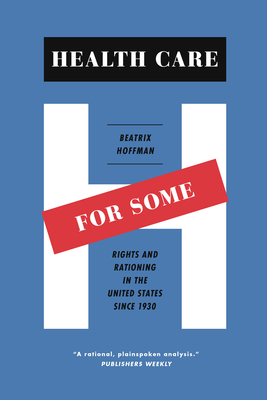 Health Care for Some

Rights and Rationing in the United States since 1930

In Health Care for Some, Beatrix Hoffman offers an engaging and in-depth look at America’s long tradition of unequal access to health care. She argues that two main features have characterized the US health system: a refusal to adopt a right to care and a particularly American approach to the rationing of care. Health Care for Some shows that the haphazard way the US system allocates medical services—using income, race, region, insurance coverage, and many other factors—is a disorganized, illogical, and powerful form of rationing. And unlike rationing in most countries, which is intended to keep costs down, rationing in the United States has actually led to increased costs, resulting in the most expensive health care system in the world.

While most histories of US health care emphasize failed policy reforms, Health Care for Some looks at the system from the ground up in order to examine how rationing is experienced by ordinary Americans and how experiences of rationing have led to claims for a right to health care. By taking this approach, Hoffman puts a much-needed human face on a topic that is too often dominated by talking heads.

Praise For Health Care for Some: Rights and Rationing in the United States since 1930…

“In the American political debate, everybody condemns the notion of ‘rationing’ health care. But Beatrix Hoffman’s meticulous history shows that rationing—by income, age, employment, etc.—has been, and remains, a central element of America’s medical system.  She demonstrates that our various attempts at reform over the decades have kept the rationing mechanisms firmly in place.”
— T.R. Reid, author of The Healing of America: A Global Quest for Better, Cheaper, and Fairer Health Care

“Beatrix Hoffman skillfully chronicles America’s struggles to make health care a right from the Depression through Obamacare.  Hoffman's beautifully written account explores the pervasive rationing of medical care and insurance in our staggeringly unequal health system. Health Care for Some is a compelling reminder of how far we have come, but also how far reform still has to go in the United States.”
— Jonathan Oberlander, author of The Political Life of Medicare

“Health Care for Some offers a powerful new interpretation of the history of the U.S. health care system. By focusing on the conflict between the promise of health care rights and the reality that rationing has always been a defining feature of the U.S. system, Beatrix Hoffman offers a perspective very different from previous studies of health care. She also provides one of the most thorough histories—and compelling critiques—of the health insurance industry available. An important, unique, and timely book.”
— Guian McKee, Miller Center of Public Affairs, University of Virginia

“Beatrix Hoffman’s goal is to encourage an honest debate about healthcare reform by identifying the varied forms of healthcare rationing. Health Care for Some examines access to and denial of care in US medicine since 1930. It is a well-researched, readable primer on the development of the complex, fragmented US medical system. . . . Hoffman paints a striking picture of the human face of need.”
— Times Higher Education

“Readers interested in the history of American health care and medicine will find this an informative look at past attempts to provide health care to more Americans and the forces and fears that for so long have made attaining universal coverage impossible.”

“An engagingly argued and insightful study of the consequences of the rationing of care for American society over the last eighty years, and of attempts from the bottom up as well as by politicians to widen access to the sort of provision citizens of many other nations take for granted. . . . The accounts of people struggling with the vagaries of the health care system were interwoven with analysis of political efforts to promote change, and the result is a wide-ranging and fresh reading of health care politics.”

“Hoffman’s study could not be more timely. . . .  In lesser hands, the history of U.S. health policy could be a dry and lifeless account that moves from one failed attempt at universal coverage to another over the last century. Hoffman, by contrast, puts flesh on the story, giving voice to those who suffered most from the absence of a health care security net.”
— American Historical Review

Beatrix Hoffman is professor in the Department of History at Northern Illinois University. She is the author of The Wages of Sickness: The Politics of Health Insurance in Progressive America.
Loading...
or support indie stores by buying on