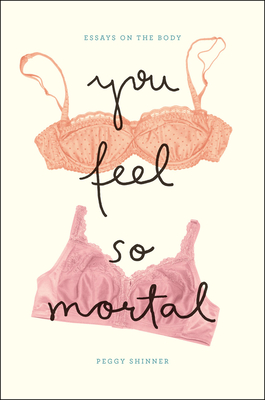 You Feel So Mortal

Essays on the Body

Feet, bras, autopsies, hair—Peggy Shinner takes an honest, unflinching look at all of them in You Feel So Mortal, a collection of searing and witty essays about the body: her own body, female and Jewish; those of her parents, the bodies she came from; and the collective body, with all its historical, social, and political implications. What, she asks, does this whole mess of bones, muscles, organs, and soul mean? Searching for answers, she turns her keen narrative sense to body image, gender, ethnic history, and familial legacy, exploring what it means to live in our bodies and to leave them behind.

Over the course of twelve essays, Shinner holds a mirror up to the complex desires, fears, confusions, and mysteries that shape our bodily perceptions. Driven by the collision between herself and the larger world, she examines her feet through the often-skewed lens of history to understand what makes them, in the eyes of some, decidedly Jewish; considers bras, breasts, and the storied skills of the bra fitter; asks, from the perspective of a confused and grieving daughter, what it means to cut the body open; and takes a reeling time-trip through myth, culture, and history to look at women’s hair in ancient Rome, Laos, France, Syria, Cuba, India, and her own past. Some pieces investigate the body under emotional or physical duress, while others use the body to consider personal heritage and legacy. Throughout, Shinner writes with elegance and assurance, weaving her wide-ranging thoughts into a firm and fascinating fabric.

Turning the category of body books on, well, its ear, You Feel So Mortal offers a probing view of our preoccupation with the body that is both idiosyncratic and universal, leaving us with the deep satisfaction of our shared humanity.

Praise For You Feel So Mortal: Essays on the Body…

“Peggy Shinner writes with self-critical candor and an often rueful wit to combine the intimate with the historical, the deeply private with the Google-able in an engaging, endearing, and wholly unexpected way. This is not a memoir, but we get to know her very well; we emerge feeling we’ve watched a woman grow up and learn some important things about the reach and the limits of her needs and her daring. And, as in the best writing, we thereby discover a great deal that pertains to us.”
— Rosellen Brown, author of Half a Heart

“Shinner is a witty and insightful storyteller and brilliant thinker, attentive to the ways the body shapes up in your mind and the world. You Feel So Mortal makes you feel so alive.”
— Aleksandar Hemon, author of The Lazarus Project

“Like the transparent pages of fine anatomy books that peel apart the strata of the body, the nested essays in Shinner’s You Feel So Mortal get under our skins. She excavates, in spades, the indicative and intricate nature of our layered and larded corporeal selves. Lyrically adept, she effortlessly reanimates Schwartz’s heavy bear, making the big beast of the body dance the horah, turning the ‘withness’ of our heft into a helium meringue, a gauzy heartache, a lost lost.”
— Michael Martone, author of Four for a Quarter

“You Feel So Mortal is a book I found nearly impossible to put down, and when I was forced to do so, I couldn’t stop thinking about it. Shinner’s warm and funny voice, along with her immense, inquiring, humane intelligence, makes the essays in this book—which concern identity, mortality, romantic and filial love, gender—a surpassing intellectual gem that entertains and engages readers with every single word. I adored this book.”
— Christine Sneed, author of Little Known Facts

“In her examinations of the body, Shinner frequently makes the mundane poetic, and in her exploration of grief, she finds beauty.”

“The kind of chick lit we can get behind.”
— DailyCandy

“Throughout the book Peggy Shinner tells you all sorts of things about herself, some factual, some embarrassing, but in just a few words, she shows you the most important thing of all: what a tremendous writer she is.”
— Chicago Reader

“A daring collection of 12 thoughtfully crafted and executed essays pertaining to body image and introspective interpretations of one's multifaceted beauty in relation to its original form. The compilation of personal triumphs and hardships in You Feel So Mortal is dynamically inclined—from reveling in one’s own inner beauty, to bra sizes, shapes, colors, hair configurations, and more. The witty and provocative anthology is poised to turn this passionate project into one unforgettable journey spanning oceans, continents, and heritages.”
— Windy City Media

“In You Feel So Mortal: Essays on the Body, Shinner’s smart, witty, bittersweet book of writings about her own body and those of others, the author examines the journey of life inside that most imperfect of vessels. Beginning with acute, often rueful observations and stories about her own body (feet, nose, hair, back, breasts, etc.), Shinner then casts an ever-wider intellectual net that dredges up a host of cultural associations with the body throughout history, from antiquity to the present. In the process, she lays bare the ways in which truth and distortion about our physical selves have intertwined to shape our collective thinking about large groups of people, in particular women and Jews, for good or ill.”
— Chicago Tribune

“These essays, even when the topics are ugly, shimmer with Shinner’s intelligence, honesty, and humor. She’s an observer of her body and the world it moves through, but more than that, she’s an affectionate fan: ‘I feel loyal to my body. It is, for better and for worse, for all its betrayals and my abuses, mine.’”
— Boston Globe

“Her interests are wide-ranging, fueled by a deep curiosity and a talent for research. The connections she draws between them are frequently surprising and delightful, and sometimes devastating. The intertextuality at times seems randomized, but Shinner’s gracefulness and dexterity with language ties the narrative together in a bundle that reads as wholly intentional, experiential, and warming. And, despite discussing at great length the familiar tropes of the body and self-criticism, her work reconstructs the history of the body as it applies to modernity in a way that retells and reclaims not only the narrative of her own body, but how we might approach ours and the bodies of others, as well.”
— Lambda Literary

“You Feel So Mortal is deeply personal, detailed, and thoughtful. Shinner does not apparently set out to take on large, sweeping themes, yet by showing clearly and tenderly how one person navigates this existence her book provides a window into being human—not in an abstract, conceptual way, but concretely and personally, being a specific human being. It is a delight not to be missed.”
— Washington Independent Review of Books

"Shinner’s twelve remarkable essays are anything but the usual fare, instead taking as her subject the complicated relationship between our bodies and our souls."
— Colorado Review

“A piercingly intimate and personal self-portrait, one that aches with questions, confidences, admissions, and resentments.”
— Australian

“From discovering her mother’s correspondence with the notorious but aging and imprisoned murderer, Nathan Leopold—of the infamous Leopold and Loeb—to scouting out a site for the eventual interment of her own body, to authorizing—and then facing the unsettling particulars of—her father’s autopsy, she engages us with story-telling that is starkly funny and tender but never sentimental. And because she is a deft essayist—capable of pushing that engine to full throttle—she presses intuitively and ambitiously beyond her own experience to explore the larger, often darker implications emanating from it.”
— River Teeth

“I derived as much sheer pleasure from these exquisitely crafted and often mordantly funny essays as from anything else I read this year. This is a book you curl up with in a comfortable chair with a mug of steaming tea, as the world reshapes itself around you.”
— Kevin Nance

A lifelong Chicagoan, Peggy Shinner teaches in the MFA in creative writing program at Northwestern University.
Loading...
or
Not Currently Available for Direct Purchase