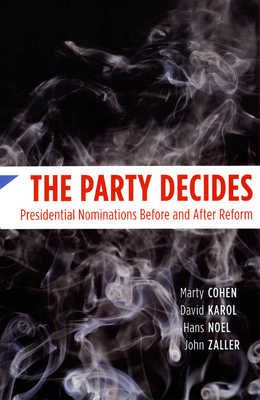 Presidential Nominations Before and After Reform (Chicago Studies in American Politics)

Throughout the contest for the 2008 Democratic presidential nomination, politicians and voters alike worried that the outcome might depend on the preferences of unelected superdelegates. This concern threw into relief the prevailing notion that—such unusually competitive cases notwithstanding—people, rather than parties, should and do control presidential nominations. But for the past several decades, The Party Decides shows, unelected insiders in both major parties have effectively selected candidates long before citizens reached the ballot box.

Tracing the evolution of presidential nominations since the 1790s, this volume demonstrates how party insiders have sought since America’s founding to control nominations as a means of getting what they want from government. Contrary to the common view that the party reforms of the 1970s gave voters more power, the authors contend that the most consequential contests remain the candidates’ fights for prominent endorsements and the support of various interest groups and state party leaders. These invisible primaries produce frontrunners long before most voters start paying attention, profoundly influencing final election outcomes and investing parties with far more nominating power than is generally recognized.

David Karol is assistant professor of political science at the University of California, Berkeley.

Hans Noel is assistant professor of government at Georgetown University.

John Zaller is professor of political science at the University of California, Los Angeles.
Loading...
or support indie stores by buying on