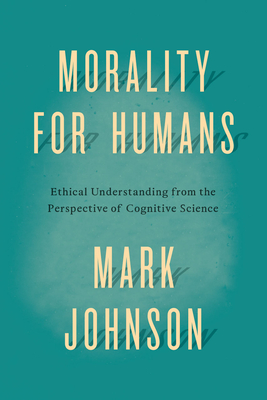 Ethical Understanding from the Perspective of Cognitive Science

What is the difference between right and wrong? This is no easy question to answer, yet we constantly try to make it so, frequently appealing to some hidden cache of cut-and-dried absolutes, whether drawn from God, universal reason, or societal authority. Combining cognitive science with a pragmatist philosophical framework in Morality for Humans: Ethical Understanding from the Perspective of Cognitive Science, Mark Johnson argues that appealing solely to absolute principles and values is not only scientifically unsound but even morally suspect. He shows that the standards for the kinds of people we should be and how we should treat one another—which we often think of as universal—are in fact frequently subject to change. And we should be okay with that. Taking context into consideration, he offers a remarkably nuanced, naturalistic view of ethics that sees us creatively adapt our standards according to given needs, emerging problems, and social interactions.

Ethical naturalism is not just a revamped form of relativism. Indeed, Johnson attempts to overcome the absolutist-versus-relativist impasse that has been one of the most intractable problems in the history of philosophy. He does so through a careful and inclusive look at the many ways we reason about right and wrong. Much of our moral thought, he shows, is automatic and intuitive, gut feelings that we follow up and attempt to justify with rational analysis and argument. However, good moral deliberation is not limited merely to intuitive judgments supported after the fact by reasoning. Johnson points out a crucial third element: we imagine how our decisions will play out, how we or the world would change with each action we might take. Plumbing this imaginative dimension of moral reasoning, he provides a psychologically sophisticated view of moral problem solving, one perfectly suited for the embodied, culturally embedded, and ever-developing human creatures that we are.

Mark Johnson is the Philip H. Knight Professor of Liberal Arts and Sciences in the Department of Philosophy at the University of Oregon. He is the author of several books, including The Meaning of the Body, The Body in the Mind, and Moral Imagination, and coauthor, with George Lakoff, of Metaphors We Live By and Philosophy in the Flesh.

Praise For Morality for Humans: Ethical Understanding from the Perspective of Cognitive Science…

“A welcome renewal and defense of John Dewey's ethical naturalism, which Johnson claims is the only morality ‘fit for actual human beings.’ The book straddles the divide between questions in moral psychology—What values do we have? Where did they come from? What role does reason play in moral deliberation?—and questions of normative and metaethics—From where do values get genuine normative authority? How do we properly rank our values when they compete with each other? These questions weave together throughout the book. . . . . He has set the stage for a promising dialogue, and we can look forward to his future contributions to the conversation.”
— Notre Dame Philosophical Reviews

“Traditionally, moral reasoning has been seen as a matter of conscious analysis—to identify pre-existing moral principles and then apply them. Cognitive science reveals that this cannot be correct, since much moral thinking happens subconsciously. As a result of experiments in moral psychology, many scientists have concluded that intuitive judgements come first, followed later, if at all, by rational justification. That's fine as far as it goes, says Johnson. But he recognises a key third process, which he calls ‘imaginative moral deliberation’—and this is where his real insight comes.”
— New Scientist

“An excellent choice for any philosopher seeking to understand what it is like to navigate moral terrain with the eye of a cognitive scientist, or for any cognitive scientist wishing to apply his knowledge to pragmatist ethics.”
— Review of Metaphysics
or
Not Currently Available for Direct Purchase
Copyright © 2020 American Booksellers Association