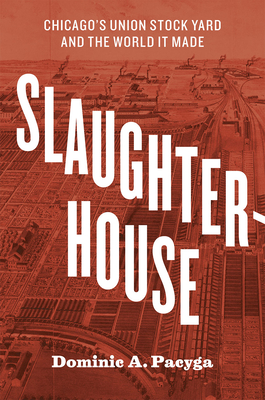 Chicago's Union Stock Yard and the World It Made

From the minute it opened—on Christmas Day in 1865—it was Chicago’s must-see tourist attraction, drawing more than half a million visitors each year. Families, visiting dignitaries, even school groups all made trips to the South Side to tour the Union Stock Yard. There they got a firsthand look at the city’s industrial prowess as they witnessed cattle, hogs, and sheep disassembled with breathtaking efficiency. At their height, the kill floors employed 50,000 workers and processed six hundred animals an hour, an astonishing spectacle of industrialized death.
Slaughterhouse tells the story of the Union Stock Yard, chronicling the rise and fall of an industrial district that, for better or worse, served as the public face of Chicago for decades. Dominic A. Pacyga is a guide like no other—he grew up in the shadow of the stockyards, spent summers in their hog house and cattle yards, and maintains a long-standing connection with the working-class neighborhoods around them. Pacyga takes readers through the packinghouses as only an insider can, covering the rough and toxic life inside the plants and their lasting effects on the world outside. He shows how the yards shaped the surrounding neighborhoods and controlled the livelihoods of thousands of families. He looks at the Union Stock Yard’s political and economic power and its sometimes volatile role in the city’s race and labor relations. And he traces its decades of mechanized innovations, which introduced millions of consumers across the country to an industrialized food system.
Once the pride and signature stench of a city, the neighborhood is now home to Chicago’s most successful green agriculture companies. Slaughterhouse is the engrossing story of the creation and transformation of one of the most important—and deadliest—square miles in American history.


Praise For Slaughterhouse: Chicago's Union Stock Yard and the World It Made…

“An illuminating history of this Chicago industry long vital to the city and the nation.”
— Wall Street Journal

“In Pacyga's capable hands, the arc of the stockyards mirrors Chicago's—a model of the Industrial Revolution that fell on hard times in the late twentith century and is now reinventing itself. His writing is as streamlined and efficient as the disassembly lines that inspired the book.”
— Chicago Tribune

“Chicago meatpacking is a well-trod subject, but historian Pacyga offers a fresh cut by focusing on the ‘Square Mile’ encompassing the Union Stock Yard and Packingtown. . . . Highly recommended.”
— Choice

“A lively and accessible introduction to the significance of Chicago’s Union Stock Yard.”
— The Journal of American History

“This is the thrilling story of Chicago's rise to power on the national stage; not just the ‘hog butcher to the world,’ but an industrial giant that led in technological innovations.”
— Journal of Illinois History

“(A) considerable achievement: writing a short, readable, multi-dimensional history of the Union Stock Yard from dawn to dusk that prompts readers to think differently about the past and also points neighborhood residents to a potentially brighter economic future.”
— Journal of American Ethnic History

“The city of Chicago has an endlessly fascinating history that scholars have explored for several generations. Dominic A. Pacyga, who has written distinguished histories of the city, is one of those scholars. His latest work to examine the history of Chicago is Slaughterhouse: Chicago’s Union Stock Yard and the World It Made. . . . Few scholars . . . have focused on the Yard as a distinct place with a history all its own and how that history relates to Chicago, the Midwest, and the world. Pacyga writes that history, primarily as the rise and fall of the Union Stock Yard, though that significant “Square Mile,” Pacyga makes clear, has a life after the Yard.
— H-Net

"Tracing the development of the 500-plus acre facility from the consolidation of several geographically scattered smaller stockyards before the Civil War, through the heyday of the Chicago industry, and into the era of decline in the 1950s, Pacyga ably synthesizes a vast amount of recent scholarship and draws upon his own original research to craft a compelling and highly readable narrative."
— The Historian

“Adds to Dominic A. Pacyga's extensive Chicago scholarship, Slaughterhouse: Chicago's Union Stock Yard and the World It Made surveys the city's meatpacking industry from its mid- nineteenth-century origins to its post-World War II demise and beyond. . . . Slaughterhouse is an accessible introduction to the history of Chicago's famous stockyards, holding appeal for a general audience—particularly those interested in Chicago history—and undergraduates.”
— American Historical Review

“Pacyga's book about Chicago's Union Stock Yard and the surrounding neighborhood is all at once a history of technology and a work of urban, business, and labor history. More impressively, he covers all these subdisciplines well in a slim 200 pages of text. The pictures, almost all of them from the author's own collection of Union Stock Yard ephemera, are astonishing and worth the cost of the book all by themselves. . . . The mastery of so many diverse subdisciplines on display here could teach any historian a thing or two about subjects thy think they already know.”
— Winterthur Portfolio

"For many people Henry Ford’s 1913 Detroit assembly line is a symbol of technological triumph. This book shows that Chicago’s 1865 disassembly line was an earlier more complete wonder, rapidly transporting animals, keeping them healthy and watered, dividing them into a wide variety of of products, communicating ownership and destination, and keeping meticulous accounts of all the processes. The speed and dexterity were put on display, proudly exploiting labor, advertising efficiency, making Chicago incredibly wealthy. This is a stunning account of the growth, complexity, rewards, and costs of modernity."
— Garry Wills, author of Lincoln at Gettysburg

"Pacyga is the great bard of Chicago-historian, raconteur, social critic. Slaughterhouse is a critically important book about one of the city's epic neighborhoods."
— Robert Slayton, author of Back of the Yards

"Pacyga has taken as his subject a single square mile, a small patch of urban land on the south side of Chicago, and has told an epic story—the rise of the Union Stockyards and Packingtown, their heyday as a great industrial complex and engine of modern America, their precipitous decline after World War II and their unexpected recent resurgence as a site of new industrial possibilities. It is a big story of rapid, and frequently unsettling, economic, technological, and social change, and Pacyga has told it in a vivid and compelling way."
— Robert Bruegmann, University of Illinois at Chicago

“Pacyga has written an intimate, elegant, fascinating, and informative story of one of America’s greatest industrial complexes. As Pacyga shows, the dismal, exploitative, vibrant, and contested histories of the stockyards and the meatpacking factories are illustrative of both the fractured dynamics of American industrial capitalism and the rise and fall of the great industrial city of Chicago. Slaughterhouse is vital reading for all concerned with urban, industrial, and social history.”
— Robert Lewis, author of Chicago Made: Factory Networks in the Industrial Metropolis

"Slaughterhouse focuses on the site where Chicago staked its claim as Hog Butcher of the world, not on a particular era, firm, organization, or technology. The book explains physical transformations—like the erection of elevated livestock viaducts and fires that ravaged structures on the site...A strength of the book is that it tells both the rise of the Chicago stock-yards and also catalogues their decline...The stockyard’s decline adds new insights into developments in Chicago’s social and economic history, and that of the political economy of modern food systems."
— Kendra Smith-Howard

Dominic A. Pacyga is professor of history in the Department of Humanities, History, and Social Sciences at Columbia College Chicago. He is the author or coauthor of several books on Chicago, including Chicago: A Biography and Polish Immigrants and Industrial Chicago: Workers on the South Side, 1880–1922, both published by the University of Chicago Press.
Loading...
or
Not Currently Available for Direct Purchase