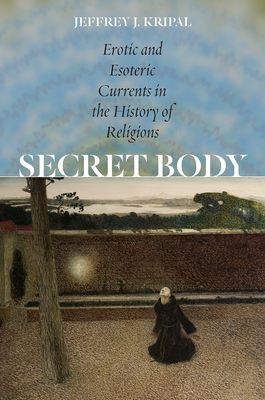 Over the course of his twenty-five-year career, Jeffrey J. Kripal’s study of religion has had two major areas of focus: the erotic expression of mystical experience and the rise of the paranormal in American culture. This book brings these two halves together in surprising ways through a blend of memoir, manifesto, and anthology, drawing new connections between these two realms of human experience and revealing Kripal’s body of work to be a dynamic whole that has the potential to renew and reshape the study of religion.
Kripal tells his story, biographically, historically and politically contextualizing each of the six books of his Chicago corpus, from Kali’s Child to Mutants and Mystics, all the while answering his censors and critics and exploring new implications of his thought. In the process, he begins to sketch out a speculative “new comparativism” in twenty theses. The result is a new vision for the study of religion, one that takes in the best of the past, engages with outside critiques from the sciences and the humanities, and begins to blaze a new positive path forward. A major work decades in the making, Secret Body will become a landmark in the study of religion.

Jeffrey J. Kripal is the J. Newton Rayzor Professor of Philosophy and Religious Thought and Associate Dean of the School of Humanities at Rice University. He is the author of several books, including Esalen: America and the Religion of No Religion and The Serpent’s Gift: Gnostic Reflections on the Study of Religion.

"Kripal presents us with a compilation of theories, cultural references and anecdotes making up an impassioned thesis about the future of religious studies and 'what human beings may become'. . .For all its eccentricities, Kripal’s work is playful, engaging and original. His references to both “high” and “low” culture are reminiscent of prominent intellectuals such as Susan Sontag and Slavoj Žižek. His earnest encouragement of scholars to be more open and his rejection of skeptical approaches--'scholars are not religiously inept and disciples are not dumb'--is both heartening and timely. Secret Body may not be fully rational or fully defensible, but it certainly is an enjoyable read."
— Times Higher Education

"Secret Body is the latest, bravest, and most accessible book by Jeffrey J. Kripal. Both ambitious and substantial. . . Secret Body is a book you can dip into at will, and revisit often. In many ways ahead of its time, Kripal’s work will likely become more and more relevant to more and more areas of inquiry as the century unfolds. It may even open up a new space for Americans to reevaluate the personal and cultural narratives they have inherited, and to imagine alternative futures.”
— Los Angeles Review of Books

"[Kripal] is a serious intellectual, but one who wears his heart on his sleeve. He writes with sensitivity and self-deprecating humor. . .a book that often sparkles with insight and inspires the reader to think, 'I never thought of it that way.'"
— New York Journal of Books

"Secret Body is a remarkable ode to freedom. With acute self-reflexivity. . .This volume serves as a fine introduction to Kripal’s career and to the story he has written of himself in order to make sense of himself within a Super Story that he admits he only dimly comprehends. And yet this lack of understanding does not signify theoretical resignation, much less mystical fascism. . .Rather, it serves as prolegomena to the future of a “new comparativism” in the history of religion.”
— Reading Religion

“[Kripal] is a compelling communicator who expresses his ideas with refreshing clarity and acuity. . .Secret Body constitutes an absorbing retrospective of ideas now brought together in one engagingly confessional volume. For anyone else interested in exploring mysticism, paranormal experiences, and the nature of being, without having to suspend their critical discernment in order to do so, Kripal’s book will be of great interest. It challenges entrenched positions taken up by those who seek to either defend or debunk esotericism. Above all this is an optimistic book, offering a hopeful new perspective on the cosmic nature of embodied consciousness as a legitimate subject of intellectual, scientific, and humanistic analysis.”
— Spiral Nature Magazine

"Kripal proposes in Secret Body a revolutionary historiography of religion. . . his personal voice and commitments are so steadily audible in the background of his vatic scholarship.”
— Fortnightly Review

“Secret Body is Jeffrey Kripal at his most capacious, and most confessional. All the highways and byways of his tireless imagination converge here, in this magisterial but intimate effort of auto-interpretation. I have come to see Kripal in the grand tradition of Ludwig Feuerbach: showing us how we have projected our own superhuman potential into a world of gods and monsters, and pleading with us to recall that potential from exile. However, Kripal tops Feuerbach in at least one column: he has an infectious sense of humor about the whole charade.”
— Charles M. Stang, Harvard Divinity School

“This beautifully written and sharply observed book is simply put one of the most remarkable challenges to scholarship-as-usual that I have encountered. It will baffle or annoy many scholars, but those who take it seriously as an invitation to look differently at the way we think about religion and what should count as the subject of scholarship will find that it changes their sense of the possible.”
— T. M. Luhrmann, author of When God Talks Back

"All of Jeffrey Kripal’s works could be called hybrid in the way they upend the staid conventions of traditional academic discourse with plentiful infusions of the personal voice and keenly judged metaphysical speculation. Secret Body takes this trademark mix of genres to a whole new level. Equal parts autobiography, manifesto, and scholarly discursus, it is an ambitious compendium that assembles under one cover all the important developmental highlights of a prolific theorist/historian of religion’s thinking . . . . A memoir of ideas that uniquely combines the personal, the historical, the metaphysical, and the mystical, this (as always) highly readable tome is an invaluable road map to a richly complex scholarly oeuvre. It is a holistic overview of a body of work that is considering how much of it there is at this point—both appropriate and very much needed."
— Gnosis

"All of Jeffrey Kripal's works could be called hybrid in the way they upend the staid conventions of traditional academic discourse with plentiful infusions of the personal voice and keenly judged metaphysical speculation.  Secret Body takes this trademark mix of genres to a while new level.
A memoir of ideas the uniquely combines the personal, the historical, the metaphysical, and the mystical, this (as always) highly readable tome is an invaluable road map to a richly complex scholarly oeuvre.  It is a holistic overview of a body of work that is - considering how much of it there is at this point - both appropriate and very much needed."
— Gnesis: Journal of Gnostic Studies
or
Not Currently Available for Direct Purchase
Copyright © 2020 American Booksellers Association