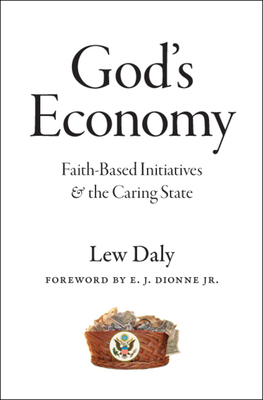 Faith-Based Initiatives and the Caring State

President Obama has signaled a sharp break from many Bush Administration policies, but he remains committed to federal support for religious social service providers. Like George W. Bush’s faith-based initiative, though, Obama’s version of the policy has generated loud criticism—from both sides of the aisle—even as the communities that stand to benefit suffer through an ailing economy. God’s Economy reveals that virtually all of the critics, as well as many supporters, have long misunderstood both the true implications of faith-based partnerships and their unique potential for advancing social justice.

Unearthing the intellectual history of the faith-based initiative, Lew Daly locates its roots in the pluralist tradition of Europe’s Christian democracies, in which the state shares sovereignty with social institutions. He argues that Catholic and Dutch Calvinist ideas played a crucial role in the evolution of this tradition, as churches across nineteenth-century Europe developed philosophical and legal defenses to protect their education and social programs against ascendant governments. Tracing the influence of this heritageon the past three decades of American social policy and church-state law, Daly finally untangles the radical beginnings of the faith-based initiative. In the process, he frees it from the narrow culture-war framework that has limited debate on the subject since Bush opened the White House Office for Faith-Based and Community Initiatives in 2001.

A major contribution from an important new voice at the intersection of religion and politics, God’s Economy points the way toward policymaking that combines strong social support with a new moral focus on the protection of families and communities.

Lew Daly is a senior fellow at Demos, a nonpartisan public policy research and advocacy organization. He is the author, most recently, of Unjust Deserts.


Praise For God's Economy: Faith-Based Initiatives and the Caring State…

“Bold yet balanced, God’s Economy will confound liberals and conservatives alike. By harnessing neglected insights from Catholic, Calvinist, and other overlapping traditions of reflection on authentic social pluralism, Daly’s book offers to put both the market and the state back where they belong—in the service of the plural communities in which people learn to love, serve, and even worship. Incisive, informed, and inspiring, this is public philosophy that packs a practical punch. Much needed in places high and low, God’s Economy takes the vital discussion of mediating institutions and faith-based initiatives three long steps forward. Daly is an exemplary guide."
— Patrick McKinley Brennan, Villanova University

“God’s Economy is a remarkable effort to rethink the nature of state power, markets, and social life. Daly makes long-neglected conceptions of plural sovereignty relevant to a wide range of contemporary debates. The result is a bold, unique contribution to social thought."

— William A. Galston, The Brookings Institution

“Balanced, thoughtful, and loaded with practical policy implications, Daly’s God’s Economy lifts the debates surrounding charitable choice and Bush’s—and now Obama’s—faith-based initiatives above the cultural wars of the left and the right by documenting their roots in Catholic and Calvinist social pluralist thinking. It thereby makes a powerful case for protecting communities—especially families and religious communities—from both the market and the state. In doing so, Daly persuasively argues that faith-based initiatives, if fully implemented, will lead to public policies more, not less, committed to helping those who are poor and on the margins of society."
— Stephen V. Monsma, Calvin College

"Eight years after President George W. Bush began federal support for faith-based social services, the program is still contested by both the right and the left. Daly, a senior fellow at Demos, a nonpartisan public policy think tank, offers the current economic crisis as a good reason for why President Obama should redouble efforts to more fully embrace it. His dense, scholarly review of the history of faith-based initiatives, which he traces to nineteenth-century German and Dutch welfare systems, may be the most comprehensive and evenhanded to date. Daly charts the evolution of the First Amendment's establishment clause from strict institutional separation of church and state to one that emphasizes equal treatment for religious and secular service providers."
— Publishers Weekly
or
Not Currently Available for Direct Purchase
Copyright © 2020 American Booksellers Association