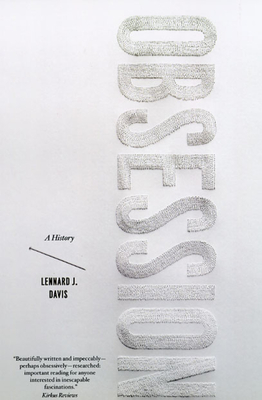 We live in an age of obsession. Not only are we hopelessly devoted to our work, strangely addicted to our favorite television shows, and desperately impassioned about our cars, we admire obsession in others: we demand that lovers be infatuated with one another in films, we respond to the passion of single-minded musicians, we cheer on driven athletes. To be obsessive is to be American; to be obsessive is to be modern.

But obsession is not only a phenomenon of modern existence: it is a medical category—both a pathology and a goal. Behind this paradox lies a fascinating history, which Lennard J. Davis tells in Obsession. Beginning with the roots of the disease in demonic possession and its secular successors, Davis traces the evolution of obsessive behavior from a social and religious fact of life into a medical and psychiatric problem. From obsessive aspects of professional specialization to obsessive compulsive disorder and nymphomania, no variety of obsession eludes Davis’s graceful analysis.


Praise For Obsession: A History…

“Davis’s larger argument, massively documented, is that disease is not merely a physical condition, but something that emerges in the course of a history. Treating obsession apart from that history is an obstacle to our understanding it. Understanding must begin, he argues, with the assumption ‘that obsession is a wide-ranging, social, cultural, historical, and, yes, medical phenomenon.’ This is a wise and learned book, although the learning is lightly worn and the wisdom mildly (if emphatically) dispensed in a style that captivates even as it instructs.”

“In his beautifully wrought interdisciplinary history of obsession, Lennard Davis delves into the deepest mysteries of human consciousness and the myriad ways that culture has tried to solve the mind's riddles. Through his astute and learned analysis of mental states ranging from demonic possession to single-minded genius to disturbing pathology, Davis paints a fascinating picture of human complexity. In his pages, we learn of the glories and the tragedies of passionate fixation—of profound achievements in art, athletics, and love; of lives and families broken beyond repair. Meditating on the great paradox of obsession—it generates brilliance and causes dysfunction—Davis does more than provide a fascinating cultural history of an elemental human condition. He tells the story, moving and memorable, of one of the life's most enduring curses and gifts.”

— Eric G. Wilson, author of Against Happiness: In Praise of Melancholy

“Lennard Davis’s new book offers a probing analysis of the history of obsession in modern culture. The book brilliantly ranges across disciplines to discern just how we became so obsessed with being obsessed. In so doing, it offers a path breaking model of how to link the humanities and medicine for the benefit of patients and their care-givers. His perspective is both sympathetic and humane.”

“Original and thought-provoking. Davis’s elegant analysis of the interplay between culture and psyche is an invaluable contribution to the literature on obsession.”

— Patricia Pearson, author of A Brief History of Anxiety

“Davis’s astute, engaging history shows just how vexed and fluctuating is the line between clinical obsession and all that passes in our culture as habit and ritual. His thought-provoking book greatly extends arguments about American psychiatry and should be welcomed for doing so.”

"Meditating on the great paradox of obsession—it generates brilliance and causes dysfunction—Davis does more than provide a fascinating cultural history of an elemental human condition. He tells the story, moving and memorable, of one of the life's most enduring curses and gifts.”
— Eric G. Wilson, author of Against Happiness: In Praise of Melancholy

"Modern society both needs and fears obsessiveness. Olympian athletes, concert soloists, and novelists have to be obsessed, yet the admired qualities that undergird their excellence also cause suffering and can lead to psychiatric diagnosis. Davis begins with a gripping story of his own boyhood compulsions. Taking examples from literature, history, art, and medicine, he shows how society both aggravates and aggrandizes obsessiveness, notably in sex education, science, and psychoanalysis. Francis Galton, Charles Dickens, Sigmund Freud, Marie Stopes, and others populate a "biocultural narrative" that Davis introduces to penetrate walls of isolation between historical context and the latest fads and between categorical disease and the experience of illness. Profound, brilliant, and engaging, the book deplores the separation of medicine and psychology from their historical and social contexts. Demonstrating a narrative approach, Davis breaks the quarantine that isolates the obsessive person from obsessive society and rightly recommends a good dose of interdisciplinary medical history."

"From romantic obsessions to artistic obsessions to the neural underpinnings of obsessive-compulsive disorder, no aspect of the word or concept is left unexplored. Davis does not neglect the important question of why we medicate clinically obsessive people, yet laud those who are obsessed by their music, art, sports or other vocational calling. Beautifully written and impeccably—perhaps obsessively—researched: important reading for anyone interested in inescapable fascinations."
— Kirkus Reviews

"Those with a keen interest in (or perhaps an obsession with) obsession and its place in human culture will enjoy Davis’s book."—Melinda Wenner, Scientific American Mind
— Melinda Wenner

"If you should pick up the book expecting an obsessively thorough discourse, you won’t be disappointed. But Davis is a fine writer, and he grabs the reader at the outset by confessing his own childhood rituals."
— Deanna Isaacs

"Quirky but informative. . . . Overall, Obsession successfully accomplishes Davis’s goal of providing a 'chapter in the ongoing history of obsessions written by people who are obsessed with obsession.' And, he promises us, 'it won’t be the last, since obsession, like guilt, is the gift that keeps giving.'”
— Richard Restak

"Obsession provides an insightful and nuanced review of the history of this tragic illness by exposing obsessive behaviour and contrasting it with the common, mildly obsessive behaviours we all engage in. The question of difference, and thus definition, is a recurring motif. Davis is a professor at the University of Illinois in the departments of English, Medical Education, and Disability and Human Development, and has an interesting broad perspective. He insists that to treat an illness effectively, we must understand its history and evolution in a cultural context. Obsession has evolved from being subjacent to demonic possession into something to be almost proud of, to want even. Obsession is the hallmark of genius, of industry and perhaps of modern life, such as our need to regularly check e-mail. . . . A witty and interesting historical tour of a fascinating subject."
— Ian Brooks

"This is an engaging book which I read with considerable - dare I say, obsessive? - enjoyment. Lennard Davis has compiled a thorough history of 'obsession' throughout the ages and across disciplines. He is particularly interested in how our society distinguishes hobbies, artistic pursuits and other excessive behaviours from obsessions, and why the medical profession pathologises behaviour that appears, at worst, benign and is, at best, responsible for some of humanity's greatest achievements. The book is laced with rich examples exemplifying obsessional people and their work."

"A fine and important study which, as ever with Davis's work, conveys both authority and wisdom."
— Stuart Murray

"Davis astutely, and accurately, depicts obsession as being far more than simply an excessive interest, preoccupation, fixation, or hobby. He also clearly derfines it as a pathological phenomenon and a highly significant medical category."
— Ian Miller

Lennard J. Davis is professor in the Departments of English, Disability and Human Development, and Medical Education at the University of Illinois at Chicago. He is the author of The Disability Studies Reader, among other books.
Loading...
or
Not Currently Available for Direct Purchase