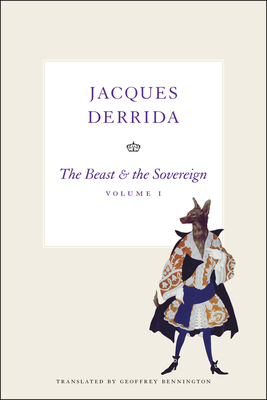 The Beast and the Sovereign, Volume I (The Seminars of Jacques Derrida)

When he died in 2004, Jacques Derrida left behind a vast legacy of unpublished material, much of it in the form of written lectures. With The Beast and the Sovereign, Volume 1, the University of Chicago Press inaugurates an ambitious series, edited by Geoffrey Bennington and Peggy Kamuf, translating these important works into English.

The Beast and the Sovereign, Volume 1 launches the series with Derrida’s exploration of the persistent association of bestiality or animality with sovereignty. In this seminar from 2001–2002, Derrida continues his deconstruction of the traditional determinations of the human. The beast and the sovereign are connected, he contends, because neither animals nor kings are subject to the law—the sovereign stands above it, while the beast falls outside the law from below. He then traces this association through an astonishing array of texts, including La Fontaine’s fable “The Wolf and the Lamb,” Hobbes’s biblical sea monster in Leviathan, D. H. Lawrence’s poem “Snake,” Machiavelli’s Prince with its elaborate comparison of princes and foxes, a historical account of Louis XIV attending an elephant autopsy, and Rousseau’s evocation of werewolves in The Social Contract.

Deleuze, Lacan, and Agamben also come into critical play as Derrida focuses in on questions of force, right, justice, and philosophical interpretations of the limits between man and animal.


Praise For The Beast and the Sovereign, Volume I (The Seminars of Jacques Derrida)…

“What this first volume . . . provides beyond its treatment of the fascinatingly intricate literary and philosophical motifs of bestiality and sovereignty is a vivid attestation to the experience of Derrida as a teacher—the quality of his attention, the tone and rhythm of his voice, his means of sparking his students capacities’ to read and think.”

“This superb translation of 13 previously unpublished lectures by Derrida is the first in a remarkable project. . . . What Derrida accomplishes in this, his final seminar, is remarkable because it goes to the very heart of his lifelong project of deconstructing the logocentric bias of Western thinking."

Geoffrey Bennington is the Asa G. Candler Professor of Modern French Thought at Emory University. He is the author of several books on Derrida and translator of many others by him, and he is coeditor of The Seminars of Jacques Derrida series.
Loading...
or
Not Currently Available for Direct Purchase