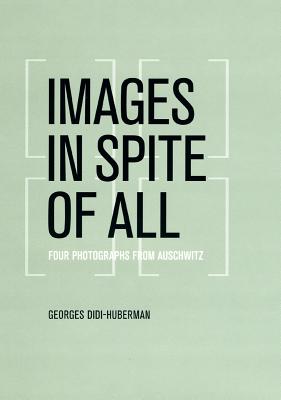 Images in Spite of All

Of one and a half million surviving photographs related to Nazi concentration camps, only four depict the actual process of mass killing perpetrated at the gas chambers. Images in Spite of All reveals that these rare photos of Auschwitz, taken clandestinely by one of the Jewish prisoners forced to help carry out the atrocities there, were made as a potent act of resistance.
Available today because they were smuggled out of the camp and into the hands of Polish resistance fighters, the photographs show a group of naked women being herded into the gas chambers and the cremation of corpses that have just been pulled out. Georges Didi-Huberman’s relentless consideration of these harrowing scenes demonstrates how Holocaust testimony can shift from texts and imaginations to irrefutable images that attempt to speak the unspeakable. Including a powerful response to those who have criticized his interest in these images as voyeuristic, Didi-Huberman’s eloquent reflections constitute an invaluable contribution to debates over the representability of the Holocaust and the status of archival photographs in an image-saturated world.

Praise For Images in Spite of All: Four Photographs from Auschwitz…

"Images in Spite of All provides the carefully extended anguished engagement, both epitaph and caption, that the subject demands."
— William T. Vollman

"The choice to translate Didi-Huberman is timely. . . . The larger problematic of the (limits of) representation of the Holocaust remains a fraught subject for Western scholars, and Didi-Huberman's polemic takes the discussion in a new and productive direction."
— Susan A. Crane

Georges Didi-Huberman is professor at the École des Hautes Études en Sciences Sociales in Paris. He is the author of more than thirty books on the history and theory of images, including Images in Spite of All, published by the University of Chicago Press.
Loading...
or
Not Currently Available for Direct Purchase