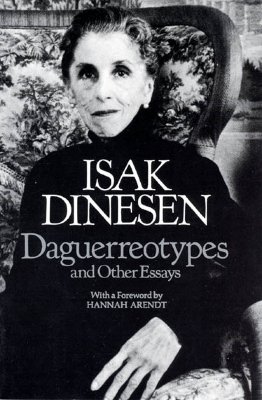 Daguerreotypes and Other Essays

"Isak Dinesen . . . had an original approach to life that permeated all her work. She loved storytelling, with the result that most of her essays are quasi-narratives, which proceed not from major to minor premise but from one anecdote to another as the way of making concrete whatever idea she is considering. Her work is a delight and at times a marvel."—The New Yorker

"Through these daguerreotypes we begin to understand other periods, the renunciations of World War I, the purpose of houses and mansions, of ritual ceremonials, such as tatooing. We are given a fresh and vivid view of the women's movement . . . which urges that what our 'small society' needs beyond human beings who have demonstrated what they can do, is people who are. 'Indeed, our own time,' she wrote in 1953, 'can be said to need a revision from doing to being.' She demonstrated it in her own work and craft, with courage and with dignity. This collection is as real as a gallery of old daguerreotypes, moving and unfaded. The work, as Hannah Arendt says, of a wise woman."—Robert Kirsch, Los Angeles Times

"These essays . . . have the flavor of good conversation: humorous, easy, personal but not oppressive, the distillation of reading, thought, and experience. Their subjects are of surprisingly current interest. We need make no concessions to the past, need not set our watches back to 'historical.' Isak Dinesen was not a faddish thinker. . . . 'In history it is always the human element that has a chance for eternal life,' Dinesen remarks, and she gives these essays their chance."—Penelope Mesic, Chicago

Isak Dinesen was the pen name of Baroness Karen Blixen of Rungstedlund (1885-1962). Also available from the University of Chicago Press are Letters from Africa, 1914-1931 and Daguerreotypes and Other Essays, both by Isak Dinesen, and Frans Lasson’s The Life and Destiny of Isak Dinesen.
Loading...
or
Not Currently Available for Direct Purchase