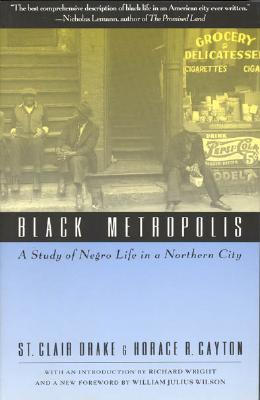 Ground-breaking when first published in 1945, "Black Metropolis" remains a landmark study of race and urban life. Based on a mass of research conducted by Works Progress Administration field workers in the late 1930s, it is a historical and sociological account of the people of Chicago's South Side, the classic urban ghetto. Drake and Cayton's findings not only offer a generalized analysis of black migration, settlement, community structure, and black-white race relations in the early part of the twentieth century, but also tell us what has changed in the last hundred years and what has not. This edition includes the original Introduction by Richard Wright and a new Foreword by William Julius Wilson.
""Black Metropolis" is a rare combination of research and synthesis, a book to be deeply pondered. . . . No one who reads it intelligently can ever believe again that our racial dilemma can be solved by pushing buttons, or by gradual processes which may reach four or five hundred years into the future." Bucklin Moon, "The Nation"
"This volume makes a great contribution to the building of the future American and the free world." Louis Wirth, "New York Times"
"By virtue of its range, its labor and its insight, the book seems certain to become a landmark not only in race studies but in the broader field of social anthropology." Thomas Sancton, "New Republic.