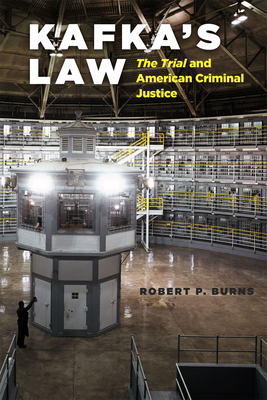 "The Trial" and American Criminal Justice

The Trial is actually closer to reality than fantasy as far as the client’s perception of the system. It’s supposed to be a fantastic allegory, but it’s reality. It’s very important that lawyers read it and understand this.” Justice Anthony Kennedy famously offered this assessment of the Kafkaesque character of the American criminal justice system in 1993. While Kafka’s vision of the “Law” in The Trial appears at first glance to be the antithesis of modern American legal practice, might the characteristics of this strange and arbitrary system allow us to identify features of our own system that show signs of becoming similarly nightmarish?

With Kafka’s Law, Robert P. Burns shows how The Trial provides an uncanny lens through which to consider flaws in the American criminal justice system today. Burns begins with the story, at once funny and grim, of Josef K., caught in the Law’s grip and then crushed by it. Laying out the features of the Law that eventually destroy K., Burns argues that the American criminal justice system has taken on many of these same features. In the overwhelming majority of contemporary cases, police interrogation is followed by a plea bargain, in which the court’s only function is to set a largely predetermined sentence for an individual already presumed guilty. Like Kafka’s nightmarish vision, much of American criminal law and procedure has become unknowable, ubiquitous, and bureaucratic. It, too, has come to rely on deception in dealing with suspects and jurors, to limit the role of defense, and to increasingly dispense justice without the protection of formal procedures. But, while Kennedy may be correct in his grim assessment, a remedy is available in the tradition of trial by jury, and Burns concludes by convincingly arguing for its return to a more central place in American criminal justice.

Praise For Kafka's Law: "The Trial" and American Criminal Justice…

“Fascinating, jarring, powerful, and unique. Burns reframes criticisms of the American criminal justice system, showing the striking parallels between Kafka’s Trial and aspects of our own system. In doing so, he administers a shock of recognition that promises to be highly effective in getting us to see the limitations of our system in a different light.”
— Brian Z. Tamanaha, Washington University School of Law

“Burns’s distinctive voice—combining that of an experienced practitioner, a legal scholar, and a philosopher—is immensely engaging, deeply serious, and consequential. He has a remarkable, almost kaleidoscopic ability to bring together, while respecting the differences, the very particular nightmare of Kafka’s work, the ideas of the great philosophers, and the daily injustices of American law today, all while insisting that we know, and should do, better.”
— Winnifred Fallers Sullivan, Indiana University Bloomington

"Kafka’s Law enormously increases a reader’s understanding of both Kafka’s writings and the American criminal justice system. The book’s barrage of present-day facts creates the same sense of baffled helplessness and of rule by nobody that the reader has when immersed in Kafka’s fictional world. Although Burns’s masterful study shows that the word Kafkaesque is no idle epithet when applied to our criminal justice system, it offers a way out, one that lies in revitalizing our legal system’s democratic roots."
— Albert W. Alschuler, University of Chicago Law School

“Burns has few equals in combining the skills of the political theorist, legal scholar, engaged lawyer, and literary critic, all of which he has brought to bear to great reward in Kafka’s Law. On the one hand, complaints about our criminal justice system as 'Kafkaesque' are longstanding to the point of cliché. On the other, readers of The Trial could easily dismiss its legal system as safely remote from our own. Burns overcomes both hurdles by taking his careful interpretation of Kafka to the specifics of American criminal law and procedure, and to a series of detailed examples of recent American criminal prosecutions. The result is an insightful, disturbing and cautionary portrait of the fragility of formal rules and legal ideals in the face of every variety of bureaucracy and politics.”
— Darryl K. Brown, University of Virginia School of Law

“The parallels that Burns convincingly draws between Kafka’s criminal justice system and our own are convincing and disturbing. And the possibilities for reform that Burns sketches (the prospects for which he, like most scholarly observers, is not optimistic) are grounded in distinctly liberal democratic and common law traditions, such as antidiscrimination rules and the jury trial. . . . By giving attention to the contribution of American democratic politics to the problems of American criminal justice, Burns juxtaposes Kafka’s portrait of an unjust, undemocratic bureaucracy in ways that allow us to draw broader insights—across contrasting systems—about how criminal justice systems can go wrong.”
— Texas Law Review

“Burns argues that courts are hampered in their ability to do justice by certain ‘features, tendencies and latent dangers of the modern legal world’ that can best be understood when viewed through the lens of Franz Kafka’s one-hundred-year-old novel The Trial. . . . Recommended.”
— Choice

“An insightful critique of the modern American criminal justice system. . . . Burns’s work exposing Kafkaesque aspects of our legal system and his search to find the most effective means of remedying these situations is vastly important to the societal goal of narrowing the gap between justice and law.”
— New Books in Law

“With skillful concision, Burns reveals that all the nightmarish elements that make the novel’s reader shudder at Josef K.’s legal experience in fact characterize American criminal justice today. Focusing on the actual norms governing police searches, seizures, interrogations, and confessions, Burns demonstrates that the law on the books bears little resemblance to how the contemporary process works.”
— Criminal Law and Criminal Justice

“Burns . . . illuminate[s] the many ways our own criminal justice system has come to resemble Kafka’s dystopia. . . . Kafka’s Law is an important, provocative, and disturbing book—one that should be read by anyone concerned about the quality of justice in our country.”
— H-NET

“In Burns’s insightful book, an alternative analogy is drawn. Kafka’s The Trial, so Burns contends, is an effective heuristic by which we might understand the gross failures of the contemporary American justice system. Burns illustrates how Kafka’s early-twentieth century parody of the worst excesses of European inquisitorial justice, sheds light on the machinations of the juridical sphere in this twenty-first century democracy.”
— Law and Society

“Whether or not you are familiar with the works of Kafka or have experience with the criminal justice system, you will find Burns’ analysis engaging and relevant. This book is a wakeup call to repair a broken system.”
— CBA Record, Chicago Bar Association

“Burns offers a close reading of Kafka’s great novel, The Trial, and uses it to illuminate the ways in which our own criminal justice system fails accused individuals through convolution, bureaucracy, and deception. . . . Highly recom­mended for students, scholars, and recreational readers interested in criminal law or law in literature. It is a creative and insightful approach to a timely topic and deserves a place on every law library’s shelf.”
— Law Library Journal

Robert P. Burns is professor at the Northwestern University School of Law. He is the author of The Death of the American Trial.
Loading...
or
Not Currently Available for Direct Purchase