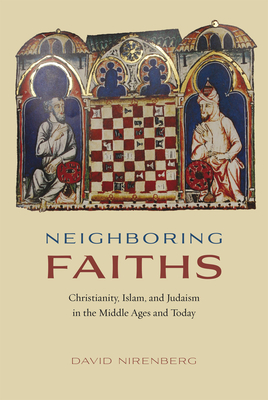 Christianity, Islam, and Judaism in the Middle Ages and Today

Christianity, Judaism, and Islam are usually treated as autonomous religions, but in fact across the long course of their histories the three religions have developed in interaction with one another. In Neighboring Faiths, David Nirenberg examines how Muslims, Christians, and Jews lived with and thought about each other during the Middle Ages and what the medieval past can tell us about how they do so today.

There have been countless scripture-based studies of the three “religions of the book,” but Nirenberg goes beyond those to pay close attention to how the three religious neighbors loved, tolerated, massacred, and expelled each other—all in the name of God—in periods and places both long ago and far away. Nirenberg argues that the three religions need to be studied in terms of how each affected the development of the others over time, their proximity of religious and philosophical thought as well as their overlapping geographies, and how the three “neighbors” define—and continue to define—themselves and their place in terms of one another. From dangerous attractions leading to interfaith marriage; to interreligious conflicts leading to segregation, violence, and sometimes extermination; to strategies for bridging the interfaith gap through language, vocabulary, and poetry, Nirenberg aims to understand the intertwined past of the three faiths as a way for their heirs to produce the future—together.

David Nirenberg is the Deborah R. and Edgar D. Jannotta Professor of Medieval History and Social Thought and the Roman Family Director of the Neubauer Collegium for Culture and Society, both at the University of Chicago. His most recent book is Anti-Judaism: The Western Tradition. He lives in Chicago.

Praise For Neighboring Faiths: Christianity, Islam, and Judaism in the Middle Ages and Today…

"It's no surprise that Nirenberg's new book, Neighboring Faiths, isn't a feel-good story about how we can all get along. The identities of Jews, Christians, and Muslims, he argues, are fundamentally enmeshed; how one group thinks about itself cannot be separated from how it thinks about the others. . . . If Nirenberg is right that ideas matter, especially once they have hardened into what he calls 'habits of thought,' our concern about the future relations between Jews, Christians, and Muslims should make us study the ideas they had about themselves and one another in the past."
— Carlos Fraenkel

"Nirenberg unpacks five hundred years of Western fantasies about Islam, ranging from barbarous invaders to utopian tolerance, a phenomenon he labels the 'inseparability of exclusion and inclusion.' . . . The essays in this book are learned, provocative, and consistently thought-provoking."
— Alex J. Novikoff

“The scope of Neighboring Faiths reaches beyond the Middle Ages and appeals to a broader audience. . . . An important read for anyone from the undergraduate level up who is interested in the history or historiography of identity, religion, and Christian-Muslim-Jewish relations.”
— Medieval Encounters

“[Nirenberg] illustrates quite compellingly how Judaism, Christianity, and Islam continued to influence and shape each other; identifies historical processes of transformation; and reveals that the relationships were never static. . . . His arguments about the shared history of the three monotheistic religions are persuasive. . . . Considering the quality of its scholarship, its elegant execution, and its important concerns, it can only be wished that [Neighboring Faiths] will gain a wide—and new—readership.”
— Historische Zeitschrift

“The book is an important contribution to current issues of grave concern and proves how knowing history improves one’s ability to make sense of critical issues of the day.”

"This collection of essays confirms Nirenberg’s place as a particularly incisive and trustworthy historian of religion."
— Commonweal

“Neighboring Faiths provides a cogent and powerful intervention into one of the most debated topics and thorniest issues in the history of the late medieval West: How did Christians, Muslims, and Jews live with each other and think about one another? The book will be of extraordinary importance not only for specialists in the field but also for general readers and anyone interested in the relations among the three religions and in the enduring discussion on ‘the clash of civilizations,’ an argument Nirenberg demolishes in an elegant but forceful manner. There are no books presently in print that even approach Nirenberg’s in terms of its themes, thoroughness, or interpretive thrust.”
— Teofilo F. Ruiz, University of California, Los Angeles

“Using medieval Iberia—the ‘land of three religions’—as his  principal point of departure, Nirenberg highlights the dynamic, often ambivalent and fractious, yet interdependent relationship among Judaism, Christianity, and Islam. Whether focused on matters of scripture or sexuality, philosophy or poetry, conversion or conflict, he offers a brilliant and provocative demonstration of medieval conceptions of both race and religion. Neighboring Faiths is scholarship at its very best, successfully challenging current notions about the so-called clash of civilizations and even Benedict XVI on the supposed incompatibility of Christianity and Islam.”
— Richard L. Kagan, Johns Hopkins University

“Neighboring Faiths maneuvers masterfully between readings of the tense and sometimes violent multicultural Iberian past and bold assessments of their lessons for our tense and sometimes violent multicultural present. Nirenberg has an uncanny knack for dwelling on—and in—interstices, and for asking the difficult questions that ‘being between’ often prompts. This is a keenly intelligent, cautionary collection—one that makes eloquent connections across the centuries.”
— Peter Cole, author of The Dream of the Poem: Hebrew Poetry from Muslim and Christian Spain, 950–1492

“Nirenberg succeeds in cultivating a sensibility that allows us to discover in the past a stimulus to critical awareness about the workings of our own assumptions about the relations among Judaism, Christianity, and Islam and habits of thought. Among those habits is the conviction that our religious traditions are independent of one another, that they are stable, and that one contains truth and tolerance while the others do not. Conversely, this book proposes the interdependence of these religions, a process in which they are constantly transforming themselves by thinking about one another in a fundamentally ambivalent form of neighborliness.”
— Mercedes García-Arenal Rodríguez, Consejo Superior de Investigaciones Científicas, Madrid

"There is much food for thought in these engaging and erudite essays regarding the interdependence between members of these three communities in medieval times. The study is well suited not only for students and scholars of religious studies and intergroup relations but also for those working on the nature of historical thinking and the history of medieval Europe."
— Religious Studies Review
or
Not Currently Available for Direct Purchase
Copyright © 2020 American Booksellers Association