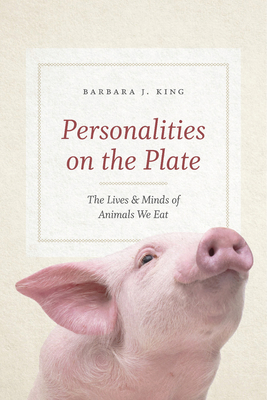 Personalities on the Plate

The Lives and Minds of Animals We Eat

In recent years, scientific advances in our understanding of animal minds have led to major changes in how we think about, and treat, animals in zoos and aquariums. The general public, it seems, is slowly coming to understand that animals like apes, elephants, and dolphins have not just brains, but complicated inner and social lives, and that we need to act accordingly.

Yet that realization hasn’t yet made its presence felt to any great degree in our most intimate relationship with animals: at the dinner table. Sure, there are vegetarians and vegans all over, but at the same time, meat consumption is up, and meat remains a central part of the culinary and dining experience for the majority of people in the developed world.

With Personalities on the Plate, Barbara King asks us to think hard about our meat eating--and how we might reduce it. But this isn’t a polemic intended to convert readers to veganism. What she is interested in is why we’ve not drawn food animals into our concern and just what we do know about the minds and lives of chickens, cows, octopuses, fish, and more. Rooted in the latest science, and built on a mix of firsthand experience (including entomophagy, which, yes, is what you think it is) and close engagement with the work of scientists, farmers, vets, and chefs, Personalities on the Plate is an unforgettable journey through the world of animals we eat. Knowing what we know--and what we may yet learn--what is the proper ethical stance toward eating meat? What are the consequences for the planet? How can we life an ethically and ecologically sound life through our food choices?

We could have no better guide to these fascinatingly thorny questions than King, whose deep empathy embraces human and animal alike. Readers will be moved, provoked, and changed by this powerful book.

Praise For Personalities on the Plate: The Lives and Minds of Animals We Eat…

"Into this overheated grudge match steps a voice of reason: a retired college professor with a fondness for animal videos on YouTube and a child's sense of wonder about the natural world. . . . Much of Personalities on the Plate reads like a fascinating zoological primer, exploring the social and emotional intelligence of animals. . . . It is not anthropomorphism, Ms. King convincingly argues, to describe animals’ emotional experiences with accuracy and precision. 'The animals we have met in these pages,' Ms. King writes, 'demonstrate decisively that, to varying degrees, they think their way through their days and experience feelings about what they make happen and what happens to them.' We, of course, determine what happens to most animals. Readers will finish the book and resolve to go forward--eating meat, abstaining from it, or consuming less of it--in a more purposeful way. The animal-welfare debate needs more thoughtful, informative and level-headed discussion--not least because it makes for effective advocacy. Personalities on the Plate is a good place to start."
— Wall Street Journal

"Meat comes bundled in packages, and the fleshy lumps don't conjure up a creature that once possessed a mind, emotions and a personality. Did that make it easier for me to eat the chicken? Or would I have more enjoyed biting into a leg of a chicken I knew? Perhaps I couldn't have done it at all. King makes you think about such matters because the lives of animals matter to her. . . . King takes us chapter by chapter on a cook's tour of animals we humans eat, from insects to octopus to chickens, fish, goats, pigs, cows, chimpanzees and dogs, exploring the latest scientific discoveries about their intelligence and sentience--building a case for them as beings that deserve more out of life than a trip down our gullets. . . . King is not a scold, but she is good at stirring up. . . . She leavens this darkness with humor and tales of animals acting as individuals, expressing the full gamut of emotions we humans often wrongly claim solely for ourselves. Her method and passion are effective, and I ended the book agreeing that we can--and should--help these creatures and our environment by choosing to eat fewer of them or none at all."
— Washington Post

"King has a knack for walking right up to the dreaded anthropomorphization line without crossing it. . . . King has gathered the most recent scientific research into what it is like to be, say, a cricket or a blue-head wrasse or a Nigerian dwarf goat, and, taken all together, it is more than a little mind-blowing. . . . She is passionate but not prescriptive."
— Literary Review of Canada

"She is astute and interesting in reviewing the most recent scientific research into the inner lives of insects, octopuses, fish and vertebrates. . . . King is creditably keen that readers should come to their own conclusions on the basis of the evidence that she presents."
— Times Literary Supplement

"The most compelling sections of the book describe octopuses and their impressive intelligence. King is full of facts about them, from their three hearts and blue blood to their ability to solve puzzles and change colour depending on their environment and mood."
— The Times, UK

"King illuminates the animal lives and sensibilities that undergird the book's title. . . . King carefully engages recent scientific advances in ethology to document how animals learn, behave, and, to the extent that human systems of observation can hypothesize, feel. In doing so, she challenges the reader to consider that animals can be said to have personality; not to anthropomorphize animals per se, but to draw our attention to how individual animals feel and act so that we can 'train ourselves to see the complexity of animals' lives'. . . . Overall, Personalities in the Plate is a highly valuable, multidisciplinary contribution to the growing body of literature on how we as human beings come to be aware of the creatures we eat, and what kinds of embodied behavioral cues we can observe in animals in order to potentially make different decisions about our consumption."
— Gastronomica

"Whether we realize it or not, whether we want to or not, with every meal we eat, we choose who gets to live and who will die. We need to look this thrice-daily fact in the face and make decisions we can live with. Here to help us is the compassionate and lyrical voice of Barbara J. King. Never shrill, always revealing, often surprising and even funny, Personalities on the Plate is must reading for everyone who cares about animals, ethics and the earth."

— Sy Montgomery, author of The Soul of an Octopus

"This thoughtful book is not about whether we 'should' or 'shouldn't' eat meat--but you'll probably have your own conclusion at the end. Barbara J. King looks at the range of values surrounding farming and feasting, and at who we are considering eating. But King also shows that different approaches to meat and to animal farming can be viewed through different lenses, giving us a richer understanding."
— Carl Safina, author of Beyond Words: What Animals Think and Feel

"Of all the animals that we eat, fish are the species for which we have least compassion. Recent scientific research shows, however, that fish are smart and have personalities just like you and I. They have feelings and suffer pain, anxiety and stress. There is no reason to treat them any different from terrestrial farm animals. So of all the animals on our plate, fish perhaps most of all require a second thought. King's thoughtful commentary on the intelligence and personality of the animals we eat will go some way to provoking these thoughts in her audience."
— Culum Brown, author of Fish Cognition and Behavior

"Barbara King has written a gem. With deft, lively writing, she guides us into the inner lives of the animals so often conveniently hidden from our view, and reveals why they deserve a place at the table, not on it. Personalities on the Plate should be read by everyone who eats, and especially the majority who eat others who had a life."
— Jonathan Balcombe, author of What a Fish Knows

"As factory farming and meat consumption increase globally, Barbara King's new book makes for crucial reading. Combining new scientific studies, personal experiences, and an honest, compassionate approach, King turns attention to the cognitive, social and emotional lives of species exploited for consumption. She puts firmly on the table the facts about animal sentience that omnivores would prefer not to think about. Brimming with ethological insights and boosted by anecdotes about individual animals (such as Ursula the pig, Mr Henry Joy the rooster, and Olive the octopus), there is no doubt that after reading Personalities on the Plate people will be compelled not just to rethink what to eat for dinner, but who they might be eating. A rigorously researched, eloquent, thoughtful and potentially life-changing book for all consumers of animals."

"In Personalities on the Plate, Barbara J. King uses the latest discoveries about mental capacities and social lives of creatures from insects and chickens to chimpanzees and dogs to make the moral case against meat. Combining first-rate science with personal experience, this book offers a fascinating window into the minds of animals that will make readers think deeply about what they are going to eat for dinner tonight."
— Hal Herzog, author of Some We Love, Some We Hate, Some We Eat

After twenty-eight years of teaching anthropology at the College of William and Mary, Barbara J. King retired early to become a science writer and public speaker. King’s work has been featured at Scientific American, Aeon, Undark, SAPIENS, NPR, the BBC, Times Literary Supplement, the World Science Festival, and the annual TED conference in Vancouver. Her TED talk on animal love and grief is available online at https://www.ted.com/speakers/barbara_j_king. She lives in Wicomico, VA.
Loading...
or
Not Currently Available for Direct Purchase