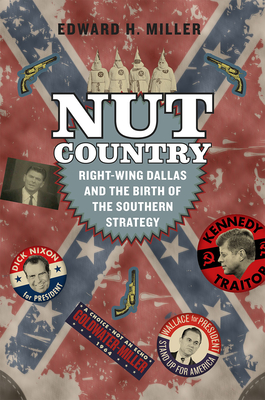 Right-Wing Dallas and the Birth of the Southern Strategy

On the morning of November 22, 1963, President Kennedy told Jackie as they started for Dallas, “We’re heading into nut country today.” That day’s events ultimately obscured and revealed just how right he was: Oswald was a lone gunman, but the city that surrounded him was full of people who hated Kennedy and everything he stood for, led by a powerful group of ultraconservatives who would eventually remake the Republican party in their own image.
In Nut Country, Edward H. Miller tells the story of that transformation, showing how a group of influential far-right businessmen, religious leaders, and political operatives developed a potent mix of hardline anticommunism, biblical literalism, and racism to generate a violent populism—and widespread power. Though those figures were seen as extreme in Texas and elsewhere, mainstream Republicans nonetheless found themselves forced to make alliances, or tack to the right on topics like segregation. As racial resentment came to fuel the national Republican party’s divisive but effective “Southern Strategy,” the power of the extreme conservatives rooted in Texas only grew.
Drawing direct lines from Dallas to DC, Miller's captivating history offers a fresh understanding of the rise of the new Republican Party and the apocalyptic language, conspiracy theories, and ideological rigidity that remain potent features of our politics today.


Praise For Nut Country: Right-Wing Dallas and the Birth of the Southern Strategy…

Well-researched and briskly written. . . . A timely, intelligent, and penetrating book."

"Lively. . . . Miller's is the rare book that one might wish a little longer."
— Bookforum

“Miller painstakingly details how a combination of newfound wealth (and a desire to hold on to it), a sudden rise of the middle class (which allowed for a single breadwinner and freed wives to dabble in politics), and the need for new residents to assimilate resulted in a highly conservative political stance riddled with deep-seated racism and 'conspiratorial' John Bircher thinking. Miller’s outstanding research allows him to weave a number of parallel stories, most notably his portrayal of the role of women working behind the scenes to enact this political shift. An insightful examination of a political shift that endures to this day.”
— Publishers Weekly

"A well-argued and compelling account. . . . Worth reading for the anecdotes alone."
— American Historical Review

"With Texas-sized ambition and a touch of flair, Edward Miller taps the fascinating history of a surprisingly understudied place--Dallas, the 'Athens of the Southwest'--to reorient our understanding of America's Republican Right. Out of the heated warfare that divided this city’s ultra- and moderate conservatives during the 1950s and 1960s emerged a pragmatic, potent, and anxious Republicanism that would capture the south in the 1970s and the nation in the years that followed. Packed full with colorful characters and surprising turning points, rich with historical insight yet pertinent to today, Nut Country is a book that students of U.S. (not just Texas!) history need to digest in order to appreciate why the 'Big D's' brand of politics has long held sway."
— Darren Dochuk, author of From Bible Belt to Sunbelt

"If you want to read a riveting account of how the Republican Party became conservative after World War II, pick up a copy of Edward H. Miller's Nut Country. What makes this journey into political history so captivating is the local story of Dallas. From the pews of the First Baptist Church to the lobby of the Adolphus Hotel, Miller walks his readers vividly through the webs of family ties, social rituals, and political brokering through which locals participated in establishing a spectrum of conservative positions rather than a set ideological stance. Be prepared to have your definition of 'conservative' broadened by the fine research of this book."
— Michelle Nickerson, author of Mothers of Conservatism

"Phoenix, Orange County, and even bucolic Sharon, Connecticut can all lay claim to being foundational places in the making of modern conservatism. Edward Miller moves our sights to the Lone Star state. He makes a bold and convincing claim that if you want to understand the conservative movement, we have to reckon with Dallas, Texas: 'Nut Country.' Featuring a memorable cast of characters--H. L. Hunt and General Edwin Walker not the least among them--Miller's book reveals how conservatives used racial politics in Dallas to change the fortunes, forever after, of the American right and the Republican Party."
— David Farber, author of The Rise and Fall of Modern American Conservatism