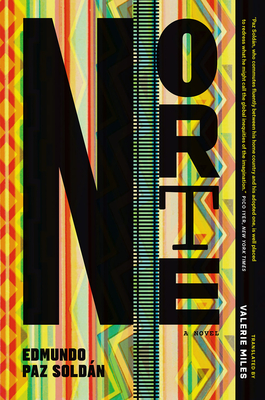 Three unconnected people travel north, each passing in isolation over one of the most troubled and controversial dividing lines in the world: the Mexico‒US border. But in a melee of language and blood, their stories and the stories of those they meet—of a young serial killer, a waitress and graphic novelist and her lover (and former professor), and an outsider artist in a mental institution—gradually begin to coalesce. Daring in both its protagonists and its structure, Edmundo Paz Soldán’s Norte is a fast-paced, vivid, and operatic blending of distinct voices. Together, they lay bare the darkness of the line over which these souls—like so many others—have passed.

A prominent member of a new generation of Latin American writers, Paz Soldán stands in defiant opposition to the magical realism of the past century, instead grounding his work in political, economic, and historical realities. Norte is no exception; it is a tale of displacement and the very human costs of immigration. Shocking with its violence even as it thrills with its language, confounding rather than cowering under the cliché of the murderous, drug-dealing immigrant, Norte is a disquieting, imperative work—an undeniable reflection of our fragmented modern world.


Praise For Norte: A Novel…

“This searing novel about three Latinos lost north of the border is not for the faint of heart. . . . Paz Soldán perfectly modulates the tension, evincing our sympathy even as we recoil. . . . We don’t forgive, but we understand. This is the Bolivian-born Paz Soldán’s miraculous gift. With unflinching realism and steely grace, Norte reminds us why literature can do what journalism cannot: We inhabit the minds of people we’d prefer to forget.”
— Lili Wright, author of "Dancing with the Tiger"

One of Kirkus's Best Books of 2016
— Kirkus Reviews

"The lives of a mentally ill savant, a young artist, and a serial killer converge in a powerful novel that shuttles across the US–Mexico border. The wide-ranging Bolivia-born Paz Soldán delivers a small cross-section of very different lives of Latinos in the United States, better to counter casual generalizations about them. But Norte's key strength is its well-formed individual characterizations. . . . Paz Soldán effectively inhabits the interior lives of each of his three characters, and Miles’s translation captures their distinct emotional flavors. . . . A superb set of interlinked character studies."
— Kirkus Reviews, starred review

“Norte is a rare book because it’s about immigrants and heavily focused on the act of immigration, but neither of the immigrant characters are held up as models. . . . This tangled, daring novel isn’t just about violence—it’s about roaming, missing home, and trying to find a place in the world. . . . Paz Soldán is part of a new breed of writers from Latin America: fascinated by America, aware of its contradictions, concerned with the role of immigrants in our society, but not willing to go over the same well-trod narrative ground. Norte isn’t your typical immigrant story, but that’s what makes it all the more powerful.”
— Richard Z. Santos

“Paz Soldán is one of the leading Bolivian writers of his generation. . . . In truth his work is so multifaceted that any single classification disserves him. . . . [This is] a sterling translation by editor and translator Miles. It traces three thematically interlocked narratives of Latin Americans who have made the border crossing and, to quote the author, have become ‘lost in the US.’ Containing elements of popular pulp fiction, academic satire, metafiction, and psychological realism, it is a riveting book that gives a complex perspective on the borderlands shared by the United States and Mexico.”
— Scott Esposito

“These voices speak of displacement, grief, and loss, the result of the painful tension between the cultural self and the smothering seduction of the United States, el Norte. . . . Paz Soldán has written a riveting and gritty story. . . . What I find so appealing about Norte is that Paz Soldán makes no attempt to sugarcoat the grim and persistent realities he portrays about immigrants who face being 'one more digit in a disposable labor force . . . at the cost of living without dreams.' He clearly asserts that the struggle against perder el norte is an arduous process of keeping one’s soul on the immigrant journey; his novel is but one stop on that journey.”
— Russell J. MacMullan Jr.

“Jesús is the dynamo powering Paz Soldán’s impressive and multifaceted novel Norte, which has just been released under the same title in Valerie Miles’s excellent translation. Told in three thematically linked but non-intersecting narratives involving Mexicans swallowed up by the US from the 1930s to the present day, the book gives a complex psychological portrait of the border’s push/pull, delving into the calamities that have made America so seductive to Mexicans, but also the factors that make this a fraught escape. Paz Soldán is a natural storyteller, giving a vivid, blistering account. . . . With such insights, Paz Soldán offers a fresh view on what can seem like an endlessly discussed place—and one likely to be in the news even more frequently under the presidency of Donald Trump.”
— Scott Esposito

“Different points of view can be distracting, but a skilled author establishes characters with distinct voices to ensure each gets the attention he or she deserves. . . . Paz Soldán astutely links the lives of these full-blooded people throughout the full-color world of Norte. . . . Paz Soldán maneuvers easily between the minds of these characters, himself crossing borders into different psyches and varying states of sanity to illustrate how traumatic displacement can be. The language often flourishes even when the scene is most solemn. . . . Norte treats the issue of immigration as something beyond the ways in which man-made boundaries become enforceable dividing lines between people and nations. Its characters experience internal struggles that arise from movement and place, but their struggles are what make them more than mere characters on a page.”
— Aaron Coats

"Dramatic and provocative. . . . Paz Soldán’s style is bold and realistic. . . . Translator Miles, who adds a long 'Translator’s Note' at the end of the novel, provides great insight into the many different 'voices' of the characters here and the difficulty of translating these into English when they are so different from each other in Spanish. . . . And she has done a masterful job."
— Mary Whipple

"Set in what translator Miles calls a 'space of the imagination,' Paz Soldán's Norte uncovers its characters' complicated relationships to expression and the trappings of readymade discourses. . . . The distance between the value they assign to others' lives and the lack they associate with their own renders a dissonance that can be characterized with the word ajeno. Roughly meaning 'alien to onself,' ajeno best approximates the novel's haunting depiction of the experience of migration, even in the best of circumstances, and expresses the forces of creation and destruction it unleashes."
— Jacqueline Loss

"At its most violent, Paz Soldán’s writing can be near indigestible, but throughout Norte it’s also masterful and magnetic, and this year has demonstrated that the American imagination could use another dozen novels with the defiant honesty of Norte. It is a tale of subtlety and shades of gray in a moment when the US-Mexican border is a divisive political sledgehammer with no room for either. Paz Soldán does something that otherwise eludes America culturally: navigate the porous space with an honest, realistic eye. He writes of the unshakeable fantasy of the border, and of its weight in the lives of those who cross it. . . . Paz Soldán has achieved something remarkable."
— Matthew Snider

“Paz Soldán, who commutes fluently between his home country and his adopted one, is well placed to redress what he might call the global inequities of the imagination.”
— Pico Iyer

“One of the most creative voices of modern Spanish-American literature.”
— Mario Vargas Llosa

“Norte stays with the reader not only because of the rhythm of its histories, but also because it says something transcendent about the horror of the present, the horror that it is impossible not to see as well as the one which is neatly camouflaged.”
— Yuri Herrera, author of "Signs Preceding the End of the World"

“Paz Solda´n has lived in the United States for nearly twenty years and knows a lot about the difficulty many of his countrymen have making their way in a society in which the coveted ‘dream’ is becoming less and less attainable. ‘There are many who become lost following this big dream,’ points out the writer. That is precisely the subject of his new novella, Norte, three stories linked by the theme of displacement.”
— El Mundo, on the Spanish edition

“The issues addressed in [Norte] are . . . crucial to current debates about the border and immigration . . . compelling. . . . A thriller.”
— Ignacio M. Sanchez Prado, Washington University in St. Louis

“[Norte is] a rigorous and intelligent narrative that focuses more on the inner complexity of its characters than on simplifications and stereotypes. . . . Paz Soldán’s writing is compact, fluid, and totally absorbing. . . . The shifting between characters and times is accomplished with ease and agility, keeping the reader, from beginning to end, engrossed in the possible twists of the trauma.”
— El Mercurio, on the Spanish edition

“A story of uprooting with universal overtones. . . . Constantly passing from one protagonist to another, blurring the frontiers of time, Paz Soldán composes ??this portrait of madness by successive strokes. . . . Norte holds out a disturbing mirror.”
— Le Monde, on the French edition

“A modern tale, punctuated with sound and fury, which reveals a major novelist.”
— Livres Hebdo, on the French edition

Born in Bolivia, Edmundo Paz Soldán is professor of Latin American literature at Cornell University. He is the multiple-award-winning author of five short story collections and ten novels, two of which, Turing’s Delirium and The Matter of Desire, have been translated into English. Valerie Miles is a translator, publisher, writer, and professor for literary translation at the Pompeu Fabra University in Barcelona. She is founding codirector of Granta en español and founding editor of the New York Review of Books Classics collection in Spanish translation. Her recent works include A Thousand Forests in One Acorn: An Anthology of Spanish-Language Fiction; Because She Never Asked, a translation of Enrique Vila-Matas’s work Porque ella no lo pidió; and This Too Shall Pass, a translation of Milena Busquet’s Eso también pasará.
Loading...
or
Not Currently Available for Direct Purchase