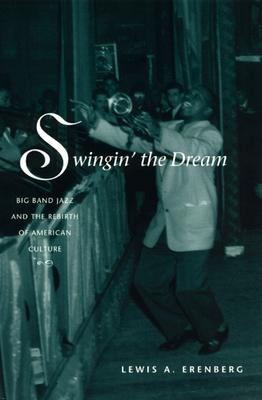 Big Band Jazz and the Rebirth of American Culture

During the 1930s, swing bands combined jazz and popular music to create large-scale dreams for the Depression generation, capturing the imagination of America's young people, music critics, and the music business. Swingin' the Dream explores that world, looking at the racial mixing-up and musical swinging-out that shook the nation and has kept people dancing ever since.

"Swingin' the Dream is an intelligent, provocative study of the big band era, chiefly during its golden hours in the 1930s; not merely does Lewis A. Erenberg give the music its full due, but he places it in a larger context and makes, for the most part, a plausible case for its importance."—Jonathan Yardley, Washington Post Book World

"An absorbing read for fans and an insightful view of the impact of an important homegrown art form."—Publishers Weekly

"[A] fascinating celebration of the decade or so in which American popular music basked in the sunlight of a seemingly endless high noon."—Tony Russell, Times Literary Supplement

Lewis A. Erenberg is professor of history at Loyola University of Chicago.
Loading...
or
Not Currently Available for Direct Purchase