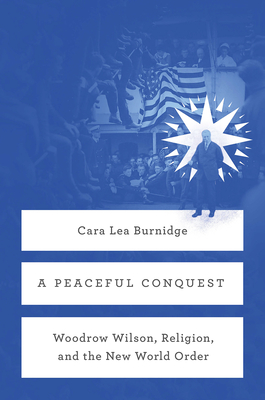 A century after his presidency, Woodrow Wilson remains one of the most compelling and complicated figures ever to occupy the Oval Office. A political outsider, Wilson brought to the presidency a distinctive, strongly held worldview, built on powerful religious traditions that informed his idea of America and its place in the world.

With A Peaceful Conquest, Cara Lea Burnidge presents the most detailed analysis yet of how Wilson’s religious beliefs affected his vision of American foreign policy, with repercussions that lasted into the Cold War and beyond. Framing Wilson’s intellectual development in relationship to the national religious landscape, and paying greater attention to the role of religion than in previous scholarship, Burnidge shows how Wilson’s blend of Southern evangelicalism and social Christianity became a central part of how America saw itself in the world, influencing seemingly secular policy decisions in subtle, lasting ways. Ultimately, Burnidge makes a case for Wilson’s religiosity as one of the key drivers of the emergence of the public conception of America’s unique, indispensable role in international relations.

As the presidential election cycle once again raises questions of America’s place in the world, A Peaceful Conquest offers a fascinating excavation of its little-known roots.

Cara Lea Burnidge is assistant professor of religion at the University of Northern Iowa.

Praise For A Peaceful Conquest: Woodrow Wilson, Religion, and the New World Order…

“In this lucid and thoughtful work, religion professor Burnidge places Wilson squarely in the context of the Protestant social gospel—an effort to Christianize the world in an image of a Western, white, patriarchal, middle-class society governed by noblesse oblige, reform legislation, social uplift, and international brotherhood. Such attitudes were advanced by a host of clergy, among them Walter Rauschenbusch, Washington Gladden, and the leadership of the Federal Council of Churches. By looking at Wilson in this framework, Burnidge best understands his neutrality posture, war leadership, and fight for the League of Nations. Sources include the Wilson and other manuscript collections, contemporary books and articles, and an extremely thorough listing of the scholarly literature. Recommended.”
— Choice

“Burnidge’s book focuses on Wilson’s international agenda during his presidency, which she persuasively contends represented ‘the social gospel applied to foreign policy.’ While Burnidge finds . . . that Wilson largely evacuated Christian theological language from his public work, she shows that his faith was—sometimes for better but more often for worse—hardly without substance.”
— Christian Century

“An impressive, sophisticated exploration into the religious dimensions of Wilsonian internationalism. This is a superior work in every sense – well-documented and intensely engaged with recent scholarship in a number of contested fields, cogently argued, and multi-layered in the analysis that it offers, as well as beautifully written. . . .Highly recommended.”
— Journal of Ecclesiastical History

“The argument that Burnidge makes in this book is novel. . . . The book is expertly researched, drawing on a wide range of sources that recreate the intellectual nodes of white Protestant society in the Progressive era. It is also written in a clear, compelling style. To be sure, this is an intellectual and religious history as much as it is a history of Wilsonianism, and it focuses on the ideas that shaped policies more so than on policymaking, the war, or the peace negotiations themselves. Yet nevertheless, by bringing religion into the story in this way, Burnidge helps us better understand the American role in World War I and the tumult that followed it.”
— Montreal Review

“Burnidge’s analysis of American religion is first-rate. She does a highly effective job of contextualizing liberal Protestantism in the late nineteenth and early twentieth centuries, especially in discussing the importance of social Christianity. Yet she does much more than this: she also recognizes young Wilson’s paradoxical affinities to traditionalism and modernism, and she deftly analyzes this paradox (and others) to locate the religious sources of Wilson’s emerging views of politics. Wilson himself was exceedingly complex and subtle, and Burnidge matches his complexity and subtlety with an admirable clarity of analysis. This is an excellent book.”
— Andrew Preston

“The questions we often ask about US foreign policy circle back to one person—Woodrow Wilson. His presence enters debates over American imperial ambitions, missions to advance democracy around the world, and the conflict between idealism and realism in foreign affairs. Among academics, the term ‘Wilsonianism’ carries a great deal of weight because it captures the hopes and failures, the triumphs and disasters of US action in the world. But we assume we understand both the man and the term associated with him—Burnidge makes clear that we do not. In a narrative that weaves together the world that made Wilson with the world he created, Burnidge demonstrates how Wilson’s ideas integrated Protestant exceptionalist views of the nation with modernist impulses of progressive imperialism. This is a story about Woodrow Wilson’s ability to marshal God, the nation, the nature of democracy, and the power of imperialism to reshape the role of America in the world. It is also a story well-told, expertly argued, and a model for how to write a new kind of international religious and intellectual history.”
— Raymond Haberski, Jr.

“A Peaceful Conquest is a thoughtful and well-researched analysis of the relationship between Protestantism and US foreign relations in the early twentieth century. Focusing on the career of Woodrow Wilson, it illuminates the complex way in which white middle-class ‘social Christians’ conceptualized race, democracy reform, and America’s place in the world. In so doing, Burnidge has made an impressive contribution to our understanding of both progressive era culture and the role of religious ideas in America’s foreign policy during World War I.”
— Ross Kennedy
or
Not Currently Available for Direct Purchase
Copyright © 2020 American Booksellers Association