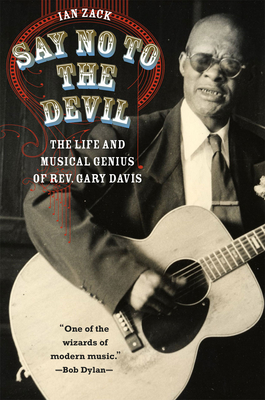 Say No to the Devil

The Life and Musical Genius of Rev. Gary Davis

Who was the greatest of all American guitarists? You probably didn’t name Gary Davis, but many of his musical contemporaries considered him without peer. Bob Dylan called Davis “one of the wizards of modern music.” Bob Weir of the Grateful Dead—who took lessons with Davis—claimed his musical ability “transcended any common notion of a bluesman.” And the folklorist Alan Lomax called him “one of the really great geniuses of American instrumental music.” But you won’t find Davis alongside blues legends Robert Johnson and Muddy Waters in the Rock and Roll Hall of Fame. Despite almost universal renown among his contemporaries, Davis lives today not so much in his own work but through covers of his songs by Dylan, Jackson Browne, and many others, as well as in the untold number of students whose lives he influenced.

The first biography of Davis, Say No to the Devil restores “the Rev’s” remarkable story. Drawing on extensive research and interviews with many of Davis’s former students, Ian Zack takes readers through Davis’s difficult beginning as the blind son of sharecroppers in the Jim Crow South to his decision to become an ordained Baptist minister and his move to New York in the early 1940s, where he scraped out a living singing and preaching on street corners and in storefront churches in Harlem. There, he gained entry into a circle of musicians that included, among many others, Lead Belly, Woody Guthrie, and Dave Van Ronk. But in spite of his tremendous musical achievements, Davis never gained broad recognition from an American public that wasn’t sure what to make of his trademark blend of gospel, ragtime, street preaching, and the blues. His personal life was also fraught, troubled by struggles with alcohol, women, and deteriorating health.

Zack chronicles this remarkable figure in American music, helping us to understand how he taught and influenced a generation of musicians.

Praise For Say No to the Devil: The Life and Musical Genius of Rev. Gary Davis…

“Long time comin’ and here at last! This fabulous book is for those who want to read, hear, and troll the depths of Americana music for incredible artists. Once you come across Rev. Gary Davis, you are forever hooked by his creative brilliance. From his earliest recordings to his last, Zack illuminates what made ‘the Rev’ so unique. Enjoy yourself! It’s a good un’!”
— Taj Mahal

"[A] magisterial biography. . . . Half saint, half sinner, all singer-songwriter, . . . the Rev. Gary Davis is that blind man you brushed by on your way to the stadium to see the big act perform. Zack's brilliant account compels us to pause for a long look at an artist who was always there, even if we didn't see him."
— Wall Street Journal

“Zack has plumbed the depths of this fascinating, complex character . . . to cover the long career of a blind bluesman who honed his trade at rent parties, chitlin’-circuit dives, and hootnanies, influencing a generation of folk and blues guitarists. . . . For those unfamiliar with this blues great, or folk-blues buffs ready to immerse themselves once again in his legend, Say No to the Devil is a tuneful read.”
— Acoustic Guitar

"Finally, the biography that Rev. Davis deserves. Ian Zack takes 'Blind Gary' out of the footnotes and into the footlights of the history of American music. Like John Coltrane, George Gershwin, Jimi Hendrix, and the rest of the very few, Davis’s genius was unique and uncompromising. How he was able to take gospel and blues and create a style that was so unique and so powerful is a story that had to be told. Now, thanks to Zack’s careful research and unbounded respect for his subject, we finally have insight into the art and environment that was Davis’s life story. With this biography, Davis can finally take his place in the pantheon of the greatest of American musicians."
— Steve Katz, cofounder of Blood, Sweat & Tears

"This isn’t a dry who-did-what-when kind of biography. It’s like Zack followed [Davis] around, making note of the boy teaching himself to play the guitar, to the confident blues performer who could play on any stage. And this isn’t the Disney version. Davis was a complicated man who lived in difficult times."
— Sing Out!

"Rev. Gary Davis had a rich and colorful but challenging life. Zack has put together the pieces of Davis’s life in an exciting and detailed way. This biography reads like a novel! It details the life and times of Davis, as well as the evolution of his music and the influence he had on generations of black and white musicians. A must-read for anyone interested in the blues, the folk revival, or the life of a true American genius."
— Stefan Grossman

“Davis was a complex and difficult man, and it is to Zack’s great credit that this comes through, along with the obvious admiration so many young musicians had for ‘the Rev.’ Say No to the Devil provides plenty of material to interest fans and newcomers alike.”
— Elijah Wald

“Zack presents a detailed but readable account of the extraordinary life of Gary Davis, the blind son of poor sharecroppers in South Carolina. This book will satisfy blues aficionados and those interested in roots music and early twentieth-century culture.”
— Library Journal

“[In this] biography of the blind preacher and street musician, the man who Keith Richards said, “started it all for me,” . . . Zack gives an informative account of Davis’s life, both the sacred and profane. . . . A readable and faithful portrait of the times as well as the man.”
— Times Literary Supplement

"Say No to the Devil is the definitive biography of Gary Davis; it's comprehensive, balanced, scholarly, generously illustrated, carefully annotated, and . . . well written. Unmissable."
— Blues & Rhythm

“Very well-researched. . . . The sheer number of sources Zack consults and cites lends the book authority. . . . As the first book-length study of Davis, [Say No to the Devil] is welcome.”
— Choice

“Zack paints a vivid picture of this brilliant guitarist, including stories of legendary jam sessions in Davis’s New York apartment which included Woody Guthrie, Leadbelly Josh White, and Lightning Hopkins. This is a most welcome addition to our blues literature.”
— Blues News

One of the Best Music Books of 2015
“Zack, in the first full biography of [the Rev. Gary Davis], follows the story from his early, poverty-ridden childhood in the South, his early days as a bluesman, his move to New York and his calling to be a preacher, and his later 'discovery' through the folk boom and the students he taught who carried on his legacy. Zack had access to many of those students and others who knew Davis, lending greater insight into a man who fought the devil perhaps because he was really so much like him. . . . A well-written work.”
— Chris Heim, host and producer, KMUW's Global Village

"As the first narrative of Reverend Gary Davis’ life, Zack’s Say No to the Devil is very much welcome...it has become the now-prevailing narrative of an influential and much-loved figure in American vernacular music."
— Recorded Sounds Collection Journal

Ian Zack is a New York–based journalist whose work has appeared in the New York Times, Forbes, and Acoustic Guitar. He worked as a concert booker for one of the oldest folk venues in New York, the Good Coffeehouse, where he got to know some of Davis’s students.
Loading...
or
Not Currently Available for Direct Purchase