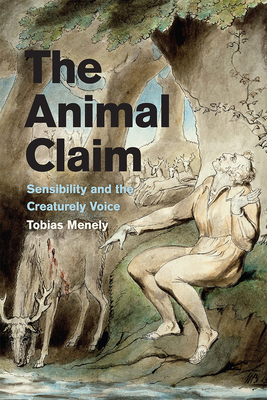 Sensibility and the Creaturely Voice

During the eighteenth century, some of the most popular British poetry showed a responsiveness to animals that anticipated the later language of animal rights. Such poems were widely cited in later years by legislators advocating animal welfare laws like Martin’s Act of 1822, which provided protections for livestock. In The Animal Claim, Tobias Menely links this poetics of sensibility with Enlightenment political philosophy, the rise of the humanitarian public, and the fate of sentimentality, as well as longstanding theoretical questions about voice as a medium of communication.

In the Restoration and eighteenth century, philosophers emphasized the role of sympathy in collective life and began regarding the passionate expression humans share with animals, rather than the spoken or written word, as the elemental medium of community. Menely shows how poetry came to represent this creaturely voice and, by virtue of this advocacy, facilitated the development of a viable discourse of animal rights in the emerging public sphere. Placing sensibility in dialogue with classical and early-modern antecedents as well as contemporary animal studies, The Animal Claim uncovers crucial connections between eighteenth-century poetry; theories of communication; and post-absolutist, rights-based politics.

Praise For The Animal Claim: Sensibility and the Creaturely Voice…

“Eloquently executed, this work of strong erudition brings together an extraordinary array of writers. . . . A must-read for scholars in British eighteenth-century literary studies as well as scholars in animal studies and in affect theory.”
— Eighteenth-Century Fiction

“With its sensitivity to multiple critical registers and clear mastery of its material, The Animal Claim will be a foundational text for years to come in the emerging field of posthuman animal studies.”
— Modern Language Quarterly

“Menely’s passionately eloquent The Animal Claim accomplishes what many would consider the impossible feat of making eighteenth-century poetry a matter of pressing concern to a wide range of fields, extending beyond eighteenth-century studies and literary studies more generally to include political theory, philosophy, ecocriticism, and the growing field of animal studies. This book is one of the most convincing accounts of the enduring relevance of the eighteenth century to our own moment that I have ever read.”
— Helen Deutsch, University of California, Los Angeles

“More intensely and capaciously than any work I know, The Animal Claim perceives and explains the deep connections between the passionate voices of high poetry and the wordless eloquence of animals. Menely’s searching readings of eighteenth-century philosophers and of Alexander Pope, James Thomson, Christopher Smart, and William Cowper will redefine significant questions within English literary studies. More broadly, his study’s theoretical range and strength make it a new foundational work for ecological understandings of artistic achievement. This is a truly magisterial book.”
— John Sitter, University of Notre Dame

“Readers will come away from this remarkable book reconsidering many of their ideas about the eighteenth century. Among its many accomplishments, The Animal Claim demonstrates the centrality of poetry not only to the period’s literature but also to the history of political advocacy. With its emphasis on sound and metaphor, its ability to convey affective pressures in excess of word and idea, poetry remediates the unrecognized creaturely voice and represents it—in both the linguistic and political senses of representation—in the public sphere. Menely reminds us that criticism at its finest can be passionate work.”
— Kevis Goodman, University of California, Berkeley

Tobias Menely is professor of English at the University of California, Davis.
Loading...
or
Not Currently Available for Direct Purchase