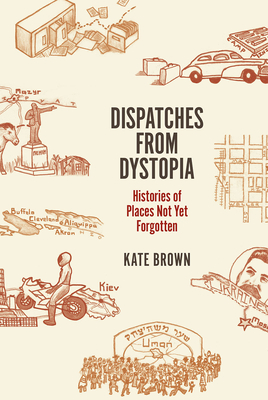 Histories of Places Not Yet Forgotten

“Why are Kazakhstan and Montana the same place?” asks one chapter of Kate Brown’s surprising and unusual journey into the histories of places on the margins, overlooked or erased. It turns out that a ruined mining town in Kazakhstan and Butte, Montana—America’s largest environmental Superfund site—have much more in common than one would think thanks to similarities in climate, hucksterism, and the perseverance of their few hardy inhabitants. Taking readers to these and other unlikely locales, Dispatches from Dystopia delves into the very human and sometimes very fraught ways we come to understand a particular place, its people, and its history.

In Dispatches from Dystopia, Brown wanders the Chernobyl Zone of Alienation, first on the Internet and then in person, to figure out which version—the real or the virtual—is the actual forgery. She also takes us to the basement of a hotel in Seattle to examine the personal possessions left in storage by Japanese-Americans on their way to internment camps in 1942. In Uman, Ukraine, we hide with Brown in a tree in order to witness the annual male-only Rosh Hashanah celebration of Hasidic Jews. In the Russian southern Urals, she speaks with the citizens of the small city of Kyshtym, where invisible radioactive pollutants have mysteriously blighted lives. Finally, Brown returns home to Elgin, Illinois, in the midwestern industrial rust belt to investigate the rise of “rustalgia” and the ways her formative experiences have inspired her obsession with modernist wastelands.

Dispatches from Dystopia powerfully and movingly narrates the histories of locales that have been silenced, broken, or contaminated. In telling these previously unknown stories, Brown examines the making and unmaking of place, and the lives of the people who remain in the fragile landscapes that are left behind.

Praise For Dispatches from Dystopia: Histories of Places Not Yet Forgotten…

“Melancholic but always fascinating Brown's journeys to some of the world’s furthest and most fragile destinations help us explore the meaning of place and memory and, along the way, subtly re-invent the art of the exploration. Dispatches from Dystopia is a compelling and important book.”
— Alastair Bonnett, author of Unruly Places: Lost Spaces, Secret Cities, and Other Inscrutable Geographies

“Brown is among our most visionary historians: a scholar, writer, and traveler who forces us to think of awfulness as a kind of opportunity and emptiness as another kind of thriving. Dispatches from Dystopia should be read by anyone interested in the fate of modernity in places that were once thought to be at its forefront. But it is also a set of essays on the art and science of sense-making: when to go to the archives and when to ignore them, how to hear and smell a place, and why our stories about someone else's past end up being some version of our own.”
— Charles King, author of Odessa: Genius and Death in a City of Dreams

“Brown's book masterfully straddles the line between personal travelogue and academic research. Her essays jump from a war-torn region of Central Asia to a forgotten hotel basement in Seattle, and Brown argues that history is much better served by historians who put themselves in the places they research and the essays they write.”
— Shelf Awareness

“Brown is a historian, but she is also a traveler.  . . . For Brown, it is not enough simply to research a place, to reproduce published photographs. The importance of the body, of the physical presence of the writer, runs throughout Dispatches from Dystopia. Reacting against a kind of history too narrowly focused on printed records, on archives and official histories, Brown argues that historians must also seek out what cannot be transcribed and collated by scribes. To see, one must go: ‘The premise of this book,’ she writes, ‘is that traveling can be a form of negotiation, an unraveling of certainties and convictions and a reassembling of the past.’”
— Los Angeles Review of Books

“Historians spend lots of time in archives and libraries. But documents often reveal little about people who lived on the margins of society or whose stories are intentionally obscured. To uncover these people’s stories, historian and self-described ‘professional disaster tourist’ ‘ Brown ventures into a variety of wastelands. Dispatches from Dystopia compellingly chronicles people who were or are living on the edge.”
— Science News

“Dispatches from Dystopia is a remarkable work on fascinating places, and combines the best of historical analysis and travel writing. Despite its melancholic tone, it is a visionary work that deserves a wide audience.”
— Times Higher Education

“The aesthetic pleasure of ‘ruin porn’—documenting places that have been abandoned and decayed by the quirks of cultural or economic transitions—is deeply connected to historian Kate Brown’s Dispatches from Dystopia: Histories of Places Not Yet Forgotten. Rather than holing up in the library for the close inspection of primary source documents, she ventures out to places like Uman, in the Ukraine, and Billings, Montana, where dystopian stories resonate in the land and the people who occupy it. . . . Each of Brown’s essays is engaging, and together they create a larger story about the ways that places tell stories that often remain untold.”
— PopMatters

Kate Brown is professor of history at the University of Maryland, Baltimore County. She is also the author of Biography of No Place: From Ethnic Borderland to Soviet Heartland and Plutopia: Nuclear Families, Atomic Cities, and the Great Soviet and American Plutonium Disasters.
Loading...
or
Not Currently Available for Direct Purchase