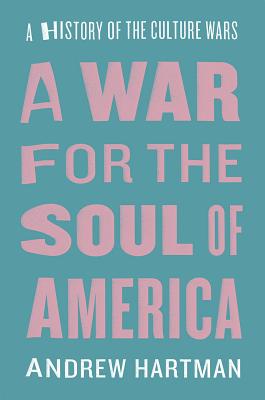 A War for the Soul of America

When Patrick Buchanan took the stage at the Republican National Convention in 1992 and proclaimed, “There is a religious war going on for the soul of our country,” his audience knew what he was talking about: the culture wars, which had raged throughout the previous decade and would continue until the century’s end, pitting conservative and religious Americans against their liberal, secular fellow citizens. It was an era marked by polarization and posturing fueled by deep-rooted anger and insecurity.

Buchanan’s fiery speech marked a high point in the culture wars, but as Andrew Hartman shows in this richly analytical history, their roots lay farther back, in the tumult of the 1960s—and their significance is much greater than generally assumed. Far more than a mere sideshow or shouting match, the culture wars, Hartman argues, were the very public face of America’s struggle over the unprecedented social changes of the period, as the cluster of social norms that had long governed American life began to give way to a new openness to different ideas, identities, and articulations of what it meant to be an American. The hot-button issues like abortion, affirmative action, art, censorship, feminism, and homosexuality that dominated politics in the period were symptoms of the larger struggle, as conservative Americans slowly began to acknowledge—if initially through rejection—many fundamental transformations of American life.

As an ever-more partisan but also an ever-more diverse and accepting America continues to find its way in a changing world, A War for the Soul of America reminds us of how we got here, and what all the shouting has really been about.

Praise For A War for the Soul of America: A History of the Culture Wars…

"As a guide to the late twentieth-century culture wars, Hartman is unrivalled. . . . Incisive portraits of individual players in the culture wars dramas. . . . Reading Hartman sometimes feels like debriefing with friends after a raucous night out, an experience punctuated by laughter, head-scratching, and moments of regret for the excesses involved."
— New Republic

"A provocative review of a formative epoch."
— Booklist

"An unparalleled guide . . . making sense of the polarized politics that have plagued the USA for the past four decades. . . . Hartman's central point is that the debates were deadly serious, asking fundamental questions abotu who we are as a nation, and about who we want to be. . . . In his efforts to provide an overview and explanation of the culture wars, Hartman is to date without peer."
— Kevin M. Schultz

"Hartman's text is nothing less than required reading on the culture wars, their history, and their impact on American public life."
— L. Benjamin Rolsky

"The frist book to tell the story of this war in all its diversity. . . . Hartman, to his credit, insists that the issues at stake in cultural politics are 'real and compelling.' . . . His affections clearly rest with the liberals, but he is generally nonpoloemical in his accounts of the two sides."
— Christian Century

"Andrew Hartman has worked with a deft hand and a keen mind to give us an absorbing account of the last half-century of culture wars in the United States. By digging far beneath the cross-fire style of political rhetoric that bombards us today, Hartman shows how the seismic changes in American society, most notably in the struggle to create a more equal and inclusive democracy, unleashed a fierce conservative attempt to hold on to a world that was escaping their grip."
— Gary Nash, author of History on Trial

"Whatever happened to the culture wars? Americans don't argue the way they used to, at least not over hot-button cultural issues like same-sex marriage and abortion. Andrew Hartman has produced both a history and a eulogy, providing a new and compelling explanation for the rise and fall of the culture wars. But don't celebrate too soon. On the ashes of the culture wars, we've built a bleak and acquisitive country dedicated to individual freedom over social democracy. Anyone who wants to take account of the culture wars--or to wrestle with their complicated legacy--will also have to grapple with this important book."
— Jonathan Zimmerman, author of Whose America?

"A War for the Soul of America illuminates the most contentious issues of the last half of the twentieth century. In lively, elegant prose, Andrew Hartman explains how and why the consensus that appeared to permeate the nation following World War II frayed and fractured so dramatically in the 1960s. With keen insight and analysis, he shows that the Culture Wars were not marginal distractions from the main issues of the day. Rather, they were profound struggles over the very foundation of what it meant to be an American. In tracing the history of those conflicts over the last half of the twentieth century, Hartman provides a new understanding of the tensions and processes that transformed the nation."
— Elaine Tyler May, author of America and the Pill

"Hartman's richly researched intellectual history makes a major contribution by taking late twentieth century conservative political culture seriously. A War for the Soul of America is a must read for anyone who wants to understand the fierceness with which so many Americans continue to defend themselves against feminism, immigration, gay rights and racial equality in the twenty-first century as well."
— Claire Bond Potter, The New School

"There is no shortage of great books about post-1960s American political culture. Andrew Hartman’s history of the culture wars ranks among the best. Hartman manages to transcend the worldviews of
his subjects, other than to confirm the existence of the culture wars as a distinct moment in American history. His is not the final word on that moment. It is, however, among the most reliable accounts thus far."
— American Historical Review