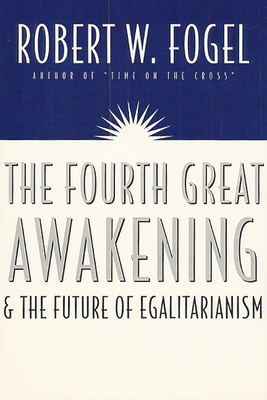 The Fourth Great Awakening and the Future of Egalitarianism

Robert William Fogel was awarded the Nobel Prize in Economic Science in 1993.

"To take a trip around the mind of Robert Fogel, one of the grand old men of American economic history, is a rare treat. At every turning, you come upon some shiny pearl of information."—The Economist

In this broad-thinking and profound piece of history, Robert William Fogel synthesizes an amazing range of data into a bold and intriguing view of America's past and future—one in which the periodic Great Awakenings of religion bring about waves of social reform, the material lives of even the poorest Americans improve steadily, and the nation now stands poised for a renewed burst of egalitarian progress.

Winner of the 1993 Nobel Prize for Economics, Robert William Fogel, is the Charles R. Walgreen Distinguished Service Professor of American Institutions in the Graduate School of Business, director of the Center for Population Economics, and a member of the Department of Economics and of the Committee on Social Thought at the University of Chicago. He is also coauthor of the bestselling Time on the Cross: The Economics of American Negro Slavery.
Loading...
or
Not Currently Available for Direct Purchase