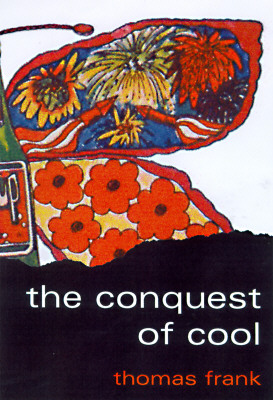 The Conquest of Cool

Business Culture, Counterculture, and the Rise of Hip Consumerism

While the youth counterculture remains the most evocative and best-remembered symbol of the cultural ferment of the 1960s, the revolution that shook American business during those boom years has gone largely unremarked. In this fascinating and revealing study, Thomas Frank shows how the youthful revolutionaries were joined--and even anticipated --by such unlikely allies as the advertising industry and the men's clothing business. " Thomas Frank is] perhaps the most provocative young cultural critic of the moment."--Gerald Marzorati, New York Times Book Review "An indispensable survival guide for any modern consumer."--Publishers Weekly, starred review "Frank makes an ironclad case not only that the advertising industry cunningly turned the countercultural rhetoric of revolution into a rallying cry to buy more stuff, but that the process itself actually predated any actual counterculture to exploit."--Geoff Pevere, Toronto Globe and Mail "The Conquest of Cool helps us understand why, throughout the last third of the twentieth century, Americans have increasingly confused gentility with conformity, irony with protest, and an extended middle finger with a populist manifesto. . . . His voice is an exciting addition to the soporific public discourse of the late twentieth century."--T. J. Jackson Lears, In These Times "An invaluable argument for anyone who has ever scoffed at hand-me-down counterculture from the '60s. A spirited and exhaustive analysis of the era's advertising."--Brad Wieners, Wired Magazine "Tom Frank is . . . not only old-fashioned, he's anti-fashion, with a place in his heart for that ultimate social faux pas, leftist politics."--Roger Trilling, Details