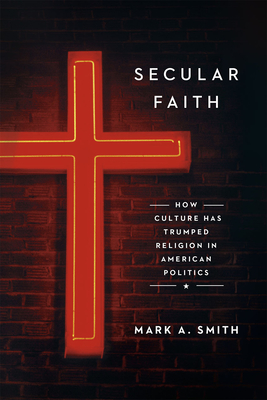 How Culture Has Trumped Religion in American Politics

When Pope Francis recently answered “Who am I to judge?” when asked about homosexuality, he ushered in a new era for the Catholic church. A decade ago, it would have been unthinkable for a pope to express tolerance for homosexuality. Yet shifts of this kind are actually common in the history of Christian groups. Within the United States, Christian leaders have regularly revised their teachings to match the beliefs and opinions gaining support among their members and larger society.

Mark A. Smith provocatively argues that religion is not nearly the unchanging conservative influence in American politics that we have come to think it is. In fact, in the long run, religion is best understood as responding to changing political and cultural values rather than shaping them. Smith makes his case by charting five contentious issues in America’s history: slavery, divorce, homosexuality, abortion, and women’s rights. For each, he shows how the political views of even the most conservative Christians evolved in the same direction as the rest of society—perhaps not as swiftly, but always on the same arc. During periods of cultural transition, Christian leaders do resist prevailing values and behaviors, but those same leaders inevitably acquiesce—often by reinterpreting the Bible—if their positions become no longer tenable. Secular ideas and influences thereby shape the ways Christians read and interpret their scriptures.

So powerful are the cultural and societal norms surrounding us that Christians in America today hold more in common morally and politically with their atheist neighbors than with the Christians of earlier centuries. In fact, the strongest predictors of people’s moral beliefs are not their religious commitments or lack thereof but rather when and where they were born. A thoroughly researched and ultimately hopeful book on the prospects for political harmony, Secular Faith demonstrates how, over the long run, boundaries of secular and religious cultures converge.

Praise For Secular Faith: How Culture Has Trumped Religion in American Politics…

“A beautifully written and richly substantive book that convincingly explodes conventional wisdom. On an array of issues, from slavery to divorce, homosexuality, and women’s rights, Smith’s exhaustive research clearly shows that the doctrines of America’s major religious traditions have shifted to conform with contemporary societal norms. Readers will learn much from this book—even those who already consider themselves familiar with one or more of the issues it explores.”
— David Campbell, University of Notre Dame

"Far from holding fast to traditions and principles, religion, like everything else, changes to meet the times. Smith adds to our understanding of America's presumed culture wars by showing how often this has happened in our history."
— Alan Wolfe, Boston College

“Smith show[s], over and over again, on issue after issue, that religious leaders have changed their tune on almost every subject to accommodate more sweeping changes taking place in broader American society. . . . Smith is after something bigger than just thumbing his nose at those who claim to have The Answer. Instead, [he] wants Americans to take a step back from the culture wars. He wants us to realize that, despite apocalyptic pronouncements that Americans are more polarized than ever before, we actually agree on quite a bit.”
— Chicago Tribune

“Has culture driven changes to the Christian faith and adjusted its tenets? Smith argues that this is the case. . . . His arguments and critique of Christianity will arouse discussion in many contexts.”
— Catholic Library World

“Secular Faith is a spirited and contrarian entry in the debate over what to make of the religious element of the ‘culture wars.’ Against the view that religion is a major influence on our politics, Smith sets out to show, as his subtitle puts it, ‘how culture has trumped religion.’ To make his case, he draws on sources ranging from the statements of religious leaders to the scholarly literature on Christianity in America and public-opinion survey research. Throughout, he strives to be attentive not only to what Christians are saying but also to what they are choosing not to talk about.”

“Mark Smith’s new book couldn’t be timelier. By charting the political development of five contentious issues in American history—slavery, divorce, homosexuality, abortion and women’s rights—he argues that U.S. Christians today have more in common morally and politically with atheists than with their Christian predecessors in previous centuries.”
— Isthmus

"[The book] develops a bold, original thesis—one bound to stir debate and contention. All students of the American culture wars should read Secular Faith. The debate it provokes will help us think more sharply about the complex relationship between American Christianity and culture."
— Journal of Church and State

Mark A. Smith is professor of political science and adjunct professor of comparative religions at the University of Washington. He is the author of two books: The Right Talk: How Conservatives Transformed the Great Society into the Economic Society and American Business and Political Power: Public Opinion, Elections, and Democracy.
Loading...
or
Not Currently Available for Direct Purchase