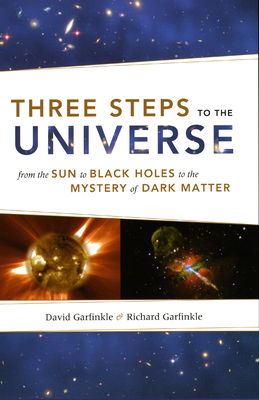 Three Steps to the Universe

If scientists can’t touch the Sun, how do they know what it’s made of? And if we can’t see black holes, how can we be confident they exist? Gravitational physicist David Garfinkle and his brother, science fiction writer Richard Garfinkle, tackle these questions and more in Three Steps to the Universe, a tour through some of the most complex phenomena in the cosmos and an accessible exploration of how scientists acquire knowledge about the universe through observation, indirect detection, and theory.
The authors begin by inviting readers to step away from the Earth and reconsider our Sun. What we can directly observe of this star is limited to its surface, but with the advent of telescopes and spectroscopy, scientists know more than ever about its physical characteristics, origins, and projected lifetime. From the Sun, the authors journey further out into space to explore black holes. The Garfinkle brothers explain that our understanding of these astronomical oddities began in theory, and growing mathematical and physical evidence has unexpectedly supported it. From black holes, the authors lead us further into the unknown, to the dark matter and energy that pervade our universe, where science teeters on the edge of theory and discovery. Returning from the depths of space, the final section of the book brings the reader back down to Earth for a final look at the practice of science, ending with a practical guide to discerning real science from pseudoscience among the cacophony of print and online scientific sources.
Three Steps to the Universe will reward anyone interested in learning more about the universe around us and shows how scientists uncover its mysteries.

Praise For Three Steps to the Universe: From the Sun to Black Holes to the Mystery of Dark Matter…

"[The authors] construct a fluid, crystalline presentation of how scientists think. The foundation of their depiction is what is manifestly perceived, such as the presence of that bright orb in the sky. To discover anything about the sun, scientists depend on detection of its emissions, such as light and neutrinos, while ideas of how these emissions arise emanate from the realms of various physical theories. With this three-tiered structure of perception, detection, and theory, the Garfinkles systematically instill how confident lay readers can be in what they read in the popular-science format."
— Booklist

"Meshing their complementary skill sets, physicist David (of Oakland University) and his brother, science fiction writer Richard (Celestial Matter, All of an Instant), explore some of the knottiest problems facing modern cosmologists in this tough but informative primer to modern cosmology. Aside from revealing the science behind the sun, black holes and dark matter, the Garfinkles' demonstrate how science develops, encouraging readers always to ask, “‘How do they know that?’ as a way of understanding science.” The “three steps” of the title begin in the 19th century, when scientists realized that the Earth was, at minimum, millions of years old; they then asked, “How old is the Sun?”—the first sally in a campaign that would unravel the mystery of nuclear energy, reveal how a star becomes a “white dwarf, a neutron star, or a black hole,” and spark a fierce, ongoing decades-long debate about the possibility of “black hole evaporation.” Arguing that “it is necessary to jump the barrier of user-friendliness and discover the fascinating world beyond that layer of comfort,” the Garfinkles aren't afraid to get technical, but this smart, rewarding read is helped by a welcome voice, a feel for narrative and a useful glossary."
— Publishers Weekly

"This book is not only an excellent introduction to the sun, black holes, and dark matter, but also a very good book aboutthe scientific process. . . .This work offers a great introduction to astronomy and to science. This reviewer envisions using it in either an introductory astronomy course or a general science course. . . .  Essential."
— Choice

David Garfinkle is professor in the Department of Physics at Oakland University.

Richard Garfinkle is the author of two books of science fiction, Celestial Matters and All of an Instant.
Loading...
or
Not Currently Available for Direct Purchase