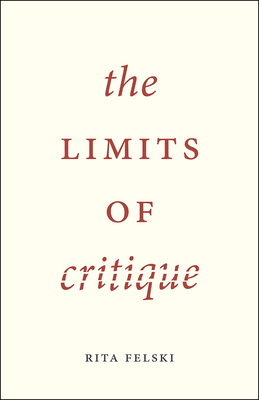 The Limits of Critique

Why must critics unmask and demystify literary works? Why do they believe that language is always withholding some truth, that the critic’s task is to reveal the unsaid or repressed? In this book, Rita Felski examines critique, the dominant form of interpretation in literary studies, and situates it as but one method among many, a method with strong allure—but also definite limits.

Felski argues that critique is a sensibility best captured by Paul Ricoeur’s phrase “the hermeneutics of suspicion.” She shows how this suspicion toward texts forecloses many potential readings while providing no guarantee of rigorous or radical thought. Instead, she suggests, literary scholars should try what she calls “postcritical reading”: rather than looking behind a text for hidden causes and motives, literary scholars should place themselves in front of it and reflect on what it suggests and makes possible.

By bringing critique down to earth and exploring new modes of interpretation, The Limits of Critique offers a fresh approach to the relationship between artistic works and the social world.


Praise For The Limits of Critique…

“Some books are so incisive and timely that they seem inevitable. . . . The Limits of Critique is such a book. By exploring its limits, Felski frees critics from relying on critique as the gatekeeper of literary studies and offers a prescient guide to life in a postcritical world.”
— Los Angeles Review of Books

“A major theorist with a lively prose and an equally lively use of metaphor, Felski has always been where the action is. She has now written a book that will get all of us to take another look at what we’ve been doing. The Limits of Critique will shock some and elate others. No one will feel neutral, and no one can afford not to read this book.”
— Wai Chee Dimock, Yale University

“Timely, well-written, and compelling. This is that rare book that offers persuasive answers to a question many literary scholars are asking today, yet also promises to open new conversations that will continue into the future. The Limits of Critique should be required reading for all lovers of literature.”
— Mary Poovey, New York University

"I sense that Felski wants us to dispense with the mood of mysterious purposiveness taken with literary works and with the influence machine apparatus and its moral psychology. Therein lies the book’s greatest and most ambitious provocation: its claim that aesthetic works have nothing to hide and that there is no ghost in the machine. By admitting of this fact we may reacquire the pleasures of criticism."
— Critical Inquiry

“What interests Felski is the critic’s task—which is to be suspicious of what lies beneath the surface of story, and she examines the methodology required to tease out that meaning and the variety of literary and psychological tools the critic uses to do so.  . . . Recommended.”
— Choice

“Rita Felski’s The Limits of Critique . . . argues compellingly that our critical habits have unwittingly become trapped within a range so pinched we can barely turn our heads to see that there might be other possibilities available. She offers a nuanced description of the state of theory-heavy academic literary critique, and some proposals for how we might finally start to move beyond it.”
— ArtsATL

“Perhaps the most ambitious reappraisal of the discipline to appear since theory’s heyday.”
— Times Literary Supplement

“Felski’s prose is bold and engaging throughout, and we are privy to her dexterous style which successfully surveys an expansive range of canonical and local critical narratives. . . . Painting a provocative landscape of contemporary critical practices, The Limits of Critique will undoubtedly resonate both with readers who are entrenched in the US culture that Felski describes as well as those external to it.”
— Textual Practice

“Felski’s punchy colloquial style eases our path . . . and her footnotes collect any number of easy-to-overlook gems . . . including not a few from the pages of New Literary History, the journal she has revived so impressively. . . . Her exasperation with the histrionics of critique and its bullying of literature is merited and persuasive.”
— American Literary History Online Review

"Felski suggests that authors, readers and critics are not the only actors involved in interpretation, there are non-humans, texts, journals, circulation systems, but moreover there are hermeneutics, theories and other techniques, including critique. Within this complex network, critique has its limitations, and there are numerous post-critical possibilities."
— Cultural Sociology

Rita Felski is the William R. Kenan Jr. Professor of English at the University of Virginia and the editor of New Literary History. She is the author of several books, including, most recently, Uses of Literature.
Loading...
or support indie stores by buying on