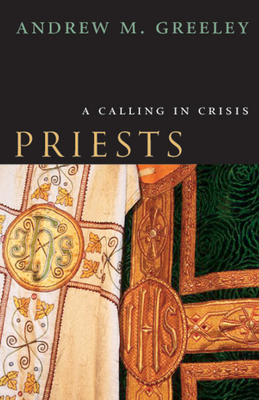 A Calling in Crisis

For several years now, the Roman Catholic Church and the institution of the priesthood itself have been at the center of a firestorm of controversy. While many of the criticisms lodged against the recent actions of the Church—and a small number of its priests—are justified, the majority of these criticisms are not. Hyperbolic and misleading coverage of recent scandals has created a public image of American priests that bears little relation to reality, and Andrew Greeley's Priests skewers this image with a systematic inside look at American priests today.

No stranger to controversy himself, Greeley here challenges those analysts and the media who parrot them in placing the blame for recent Church scandals on the mandate of celibacy or a clerical culture that supports homosexuality. Drawing upon reliable national survey samples of priests, Greeley demolishes current stereotypes about the percentage of homosexual priests, the level of personal and professional happiness among priests, the role of celibacy in their lives, and many other issues. His findings are more than surprising: they reveal, among other things, that priests report higher levels of personal and professional satisfaction than doctors, lawyers, or faculty members; that they would overwhelmingly choose to become priests again; and that younger priests are far more conservative than their older brethren.

While the picture Greeley paints should radically reorient the public perception of priests, he does not hesitate to criticize the Church's significant shortcomings. Most priests, for example, do not think the sexual abuse problems are serious, and they do not think that poor preaching or liturgy is a problem, though the laity give them very low marks on their ministerial skills. Priests do not listen to the laity, bishops do not listen to priests, and the Vatican does not listen to any of them. With Greeley's statistical evidence and provocative recommendations for change—including a national "Priest Corps" that would offer young men a limited term of service in the Church—Priests offers a new vision for American Catholics, one based on real problems and solutions rather than on images of a depraved, immature, and frustrated priesthood.

Praise For Priests: A Calling in Crisis…

"The prophetic outcry of a public intellectual who wants to weigh in on the significance of the scandal with empirically based interpretations of its impact for the future. . . . Greeley's summary is sobering. . . . Priests dares to address the disappointing state of ministry in the church today. It disposes of some oft-repeated judgments on priests concerning celibacy, homosexuality and priests' morale. . . . These are hard days, and his agenda of sorting out the social meaning of priesthood in the wake of the clergy sexual abuse crisis may be the kind of rough talk that will wake up some readers and empower others."
— Paul Philibert

"[Greeley] does an admirable job of establishing a scientifically verifiable view of the priests of the United States today, one that is not drawn from anecdotal evidence or personal opinion. . . . Greeley does an admirable job of what he set out to do—to give anyone who is willing to listen objective data from which to discern the appropriate responses and actions regarding the future of priestly ministry in the United States."
— Dan Danielson

"In this slim, but forcefully argued volume . . . Greeley examines current cultural perceptions of the institution of the priesthood and those who pursue it as a vocation. It is not a pretty picture. . . . No one will ever accuse Professor Greeley of being less than blunt. And that is all to the good. This is a worthwhile study that is carefully articulated and methodologically rigorous. It should be required reading for all formators in seminaries and will be extremely useful for anyone intersted in the present state of the ministry."
— Patrick J. Hayes

“The mixture of humility and arrogance that is part of Greeley’s appeal surfaces here when, referring to his sociological studies, Greeley says they are usually ‘not very good’ but ‘the best there is on the subject’ because no one else is doing what he does. He dismisses psychologists’ studies of the priesthood, suggesting that psychological methods are inferior to sociological methods as bases for global interpretation. He dismisses former priests’ and non-Catholic’s studies, suggesting that they are biased (his are ‘empirical’). Be that as it may, the data underlying this book depict the Roman Catholic clergy as representative of the population as a whole. Priests are relatively satisfied in their work and no more or less sexually mature and self-fulfilled than other men. The greatest problem facing the priesthood, which Greeley locates in the institutional structure of the church, is disconnection from the concerns of the laity. In the end, he advises, ‘Clergy at all levels from the pope to the lowliest parish curate must be quiet and listen. And listen. And listen.’”

“As a polemicist, Greeley has no peer. . . . Greeley demolishes the claims of other self-styled experts . . . that the crisis of sexual abuse by members of the clergy, which inevitably looms large in these pages, is a result of compulsory celibacy and/or a disproportionate number of homosexuals in the priesthood.”

“In "Priests: A Calling in Crisis," Andrew M. Greeley, one of the best-known priests in America, takes up the cause of men like Tom Doyle -- men who do a tough job in difficult circumstances. A sociologist, Greeley examines the abuse crisis through the prism of statistics. He concludes that most priests like their work. Celibacy is not a burden to most of them. Dissatisfaction comes in not being appreciated, either by their bishops or a public that now views too many of them with suspicion. Father Greeley deals bluntly with questions about the "gay subculture" within the priesthood, the church's inability to deal with questions of sex and the culpability of bishops in the abuse crisis. Yet for most priests, he says, these questions are tangential. They're working too hard trying to save souls. This dense, number-laden book adds an important empirical perspective to discussions of the abuse crisis and should be of comfort to worried Catholics and the men who minister to them.”

“A robust and objective examination of the true state of the priesthood in America, with Greeley’s trademark sociological analysis as a centerpiece.”

“This book represents Andrew Greeley in vintage form as an agent provocateur within both Catholicism and sociology.”

“The book should be required reading in every seminary course on priesthood.”

A prolific author of fiction and nonfiction, Andrew Greeley is on the staff of the National Opinion Research Center at the University of Chicago and professor of social science at the University of Arizona. His nonfiction books include Confessions of a Parish Priest, Religious Change in America, The Catholic Imagination, and The Catholic Revolution.
Loading...
or
Not Currently Available for Direct Purchase