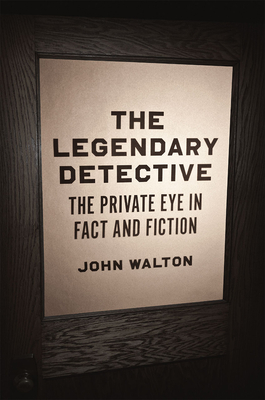 The Private Eye in Fact and Fiction

“I’m in a business where people come to me with troubles. Big troubles, little troubles, but always troubles they don’t want to take to the cops.” That’s Raymond Chandler’s Philip Marlowe, succinctly setting out our image of the private eye. A no-nonsense loner, working on the margins of society, working in the darkness to shine a little light.

The reality is a little different—but no less fascinating. In The Legendary Detective, John Walton offers a sweeping history of the American private detective in reality and myth, from the earliest agencies to the hard-boiled heights of the 1930s and ’40s. Drawing on previously untapped archival accounts of actual detective work, Walton traces both the growth of major private detective agencies like Pinkerton, which became powerful bulwarks against social and labor unrest, and the motley, unglamorous work of small-time operatives. He then goes on to show us how writers like Dashiell Hammett and editors of sensational pulp magazines like Black Mask embellished on actual experiences and fashioned an image of the PI as a compelling, even admirable, necessary evil, doing society’s dirty work while adhering to a self-imposed moral code. Scandals, public investigations, and regulations brought the boom years of private agencies to an end in the late 1930s, Walton explains, in the process fully cementing the shift from reality to fantasy.

Today, as the private detective has long since given way to security services and armed guards, the myth of the lone PI remains as potent as ever. No fan of crime fiction or American history will want to miss The Legendary Detective.

Praise For The Legendary Detective: The Private Eye in Fact and Fiction…

"A fascinating account of the intersection of reality and fantasy, The Legendary Detective connects Dashiell Hammett's world of such fictional detectives as the Continental Op and Sam Spade to Samuel Hammett's (the same guy) experience of the real world of Pinkerton and Burns detectives working to break strikes and stir up political strife. It's a penetrating story of the development of a contemporary legend via the interplay of the detective business and the culture industries which has lastingly influenced our understanding of urban life."
— Howard Becker, author of Tricks of the Trade

"Over nearly a century, a symbiotic relationship developed between detective practices and the popular culture industry that depicted them. The Legendary Detective is a masterly analysis of private detective work within the context of popular culture, revealing their interweaving and mutual influence. Mass-market literature made detective work look glamorous, which in turn provided a model and an incentive for memoirists like Alan Pinkerton, Charlie Siringo, and William J. Burns. Detectives wrote field and case reports that they and the home office polished and no doubt embellished to impress clients whose expectations were influenced by popular culture; fact and fiction blurred. Walton's analysis is brilliant."
— Robert Weiss, SUNY

"Walton undertakes careful forensic history to piece together the characters and the cases. In doing so, he allows us to see why novelists didn’t want to let the facts stand in the way of a good story. . . . From a historical point of view, The Legendary Detective has much to recommend it, not least Walton's revealing of the agencies' murky practices."

"The Legendary Detective makes a noteworthy contribution to the study of detective fiction."
— Journal of American Culture

John Walton is distinguished research professor of sociology at the University of California, Davis and the author of many books.
Loading...
or
Not Currently Available for Direct Purchase