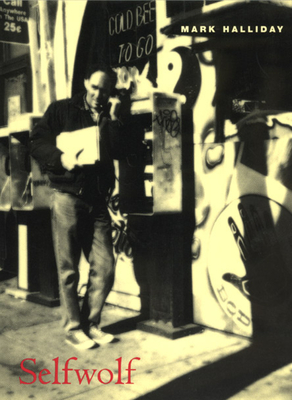 In his third book of poems, Mark Halliday grapples with the endless struggle between self-concern and awareness of the rights of others. Through humor, ironic twists, and refreshing candor, these poems confront a variety of situations—death, divorce, artistic egotism and envy, personal relationships—where the very idea of self is under siege.

"If Selfwolf were a pop music CD, it would be hailed as Mark Halliday's breakthrough album. . . . This third collection of poems teems with unsparing confessions of misdirected lust, lost faith, regret and a winningly goofy cheerfulness in the face of all that bad stuff. . . . The informal, conversational quality of Halliday's work almost hides its artfulness, which seems to be precisely his intention."—Ken Tucker, New York Times Book Review

"With unflinching, often comic honesty about how 'ego-fetid, hostile, grasping' we are, Halliday exposes the self's wolfish hungers and weaknesses."—Andrew Epstein, Boston Review

"Mark Halliday's new book offers more of his trademark riffs on self-consciousness. His subversive, surprising, hugely enjoyable poems will make you laugh out loud, squirm in uncomfortable recognition, and appreciate anew the comedy of our daily battles for self-preservation. . . reading Halliday is pure delight. . . . I love the daring and intelligence with which Halliday skates along the shifting boundary between self within and world outside. Selfwolf slows down our habitual negotiations between 'in here' and 'out there,' exposing the edgy comedy of how we survive."—Damaris Moore, Express Books

Mark Halliday is distinguished professor of English at Ohio University.
Loading...
or
Not Currently Available for Direct Purchase