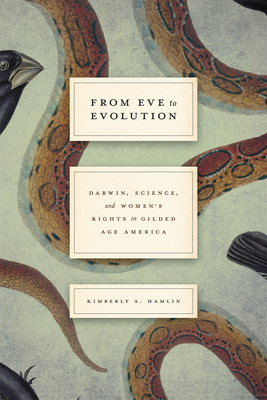 From Eve to Evolution

From Eve to Evolution provides the first full-length study of American women’s responses to evolutionary theory and illuminates the role science played in the nineteenth-century women’s rights movement. Kimberly A. Hamlin reveals how a number of nineteenth-century women, raised on the idea that Eve’s sin forever fixed women’s subordinate status, embraced Darwinian evolution—especially sexual selection theory as explained in The Descent of Man—as an alternative to the creation story in Genesis.

Hamlin chronicles the lives and writings of the women who combined their enthusiasm for evolutionary science with their commitment to women’s rights, including Antoinette Brown Blackwell, Eliza Burt Gamble, Helen Hamilton Gardener, Charlotte Perkins Gilman, and Elizabeth Cady Stanton. These Darwinian feminists believed evolutionary science proved that women were not inferior to men, that it was natural for mothers to work outside the home, and that women should control reproduction. The practical applications of this evolutionary feminism came to fruition, Hamlin shows, in the early thinking and writing of the American birth control pioneer Margaret Sanger.

Much scholarship has been dedicated to analyzing what Darwin and other male evolutionists had to say about women, but very little has been written regarding what women themselves had to say about evolution. From Eve to Evolution adds much-needed female voices to the vast literature on Darwin in America.

Praise For From Eve to Evolution: Darwin, Science, and Women's Rights in Gilded Age America…

“The most comprehensive account so far of how nineteenth-century US men and women appropriated Darwinian ideas to argue for the equality of the sexes in the domestic and public spheres. . . . This deeply researched and richly detailed picture of US feminism in the late nineteenth century and early twentieth century is an important contribution to our understanding of the interrelation of gender politics and science. From Eve to Evolution firmly corrects the mistaken view that evolutionary biology and feminism are at odds. And it reveals a more diverse dialogue around the science of sexual equality in the era than is generally appreciated.”
— Sarah S. Richardson

"Full of original insights into well-known figures in women’s history—Charlotte Perkins Gilman, Margaret Sanger and Cady Stanton—even as it reintroduces long-forgotten contributors. . . . From Eve to Evolution is a contribution to both the history of American feminism and the history of women and science, as well as an excellent read."
— Ellen Carol DuBois, University of California, Los Angeles

"Hamlin's textured and richly researched book addresses a substantial void in our understanding of the reception and application of evolutionary theory in the United States, offering the first full-length investigation into women's engagement with evolutionary theory and the role that the theory played in the women's rights movement."
— Tina Gianquitto

"This is a truly enlightening book, sure to serve for years to come as a model for the exploration of how science and culture interact."
— Guy Lancaster

"In her deft and elegant account of American intellectual women’s responses to evolution and its interpreters, [Hamlin] establishes the Darwinian legacy to be—at least with regard to discourses of sex difference, sexual selection, and reproductive outcomes—more multifaceted than Darwin’s own utterances and beliefs predicted."
— Judith Allen, Indiana University

"Hamlin's fascinating intellectual history uncovers how the new evolutionary science provided multiple arguments by which to advance the cause of women's rights in the home and society. . . . Hamlin offers a lucid narrative of how a group of women intervened in a period between the demise of Eve, as the metanarrative for the meaning of womanhood, and the masculinist consolidation of evolutionary science."
— Lilian Calles Barger

"While Charles Darwin is not widely associated with feminism, Kimberly A. Hamlin argues convincingly that his work was foundational to the American women’s movement of the late nineteenth century. . . . Hamlin’s book is lively with the intellectual debates of the moment when Darwin’s ideas merged with the women’s rights movement."
— Megan Elias, Borough of Manhattan Community College, CUNY

“From Eve to Evolution documents the ardent ways in which women’s rights advocates articulated and advanced Charles Darwin’s observations of female choice in the natural world as a counterargument to age-old biblical assertions about women’s roles in society. Original and synthetic, Hamlin’s analysis follows key activists—some radical and others well established in society—to demonstrate their careful attention to the science involved as they made their case. She provides a fresh intellectual history of late nineteenth-century feminism that will interest historians of science as well as those interested in women, gender, and science issues.”
— Sally Gregory Kohlstedt, editor of History of Women in the Sciences

“From Eve to Evolution offers a lucid account of Darwin’s theories and their reception in America, focusing particularly on elements critical to women of the late nineteenth and early twentieth centuries—the conflict between work and motherhood, women’s individuation, and sexual selection. The book restores figures, important in their own day but lost to historical consideration, such as Helen Hamilton Gardener and Eliza Burt Gamble, and presents lesser-known aspects of better-known figures, such as Antoinette Brown Blackwell. The work offers an important reminder of the role that science increasingly played in American culture and the baneful effects of the silencing of women’s voices from scientific discussion and debate.”
— Helen Lefkowitz Horowitz, author of Wild Unrest

“The title of this book, From Eve to Evolution, neatly summarizes Hamlin’s narrative: how a relatively small but influential group of American feminists embraced the natural evolution of humans as a weapon to challenge the biblical—and notoriously patriarchal—account of God’s creation of Adam and Eve in the Garden of Eden. The fact that historians have struggled for decades to identify women’s voices in the debates over Darwinism, both pro and con, makes this volume especially valuable.”
— Ronald L. Numbers, University of Wisconsin–Madison

“It may come as a surprise to many that Darwinian theory was a potent resource for feminism in America in the last quarter of the nineteenth century. Hamlin traces the work of authors and activists Antoinette Blackwell, Elizabeth Stanton, Charlotte Gilman, Eliza Gamble, Helen Gardener and Margaret Sanger, all of whom drew inspiration from evolutionary writings in the watershed period before science became professionalized and ‘masculinized’….  In this well-researched and clearly written study, Hamlin examines these varied contributions to a ‘reform Darwinism’ or ‘Darwinian feminism’, and the possibilities they helped to open for women and men to forge new identities and social relations.”

"Although a number of the arguments outlined in this book may be familiar, Hamlin offers a valuably detailed history of the interaction of Darwinism an feminism, and of the uneven yet dramatic progress in women’s understanding of themselves and in women’s rights from 1870 to 1914. Hamlin views these debates through a twenty-first-century lens, pointing out ways in which we might understand the issues differently (in matters of race and class, for example), while trying to place them in their proper historical context."
— American and English Studies

Kimberly A. Hamlin is associate professor of American studies and history at Miami University in Oxford, Ohio.
Loading...
or support indie stores by buying on