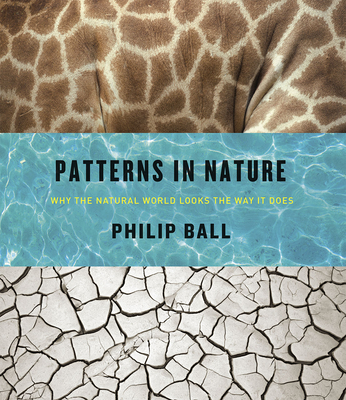 Why the Natural World Looks the Way It Does

Though at first glance the natural world may appear overwhelming in its diversity and complexity, there are regularities running through it, from the hexagons of a honeycomb to the spirals of a seashell and the branching veins of a leaf. Revealing the order at the foundation of the seemingly chaotic natural world, Patterns in Nature explores not only the math and science but also the beauty and artistry behind nature’s awe-inspiring designs.

Unlike the patterns we create in technology, architecture, and art, natural patterns are formed spontaneously from the forces that act in the physical world. Very often the same types of pattern and form – spirals, stripes, branches, and fractals, say—recur in places that seem to have nothing in common, as when the markings of a zebra mimic the ripples in windblown sand. That’s because, as Patterns in Nature shows, at the most basic level these patterns can often be described using the same mathematical and physical principles: there is a surprising underlying unity in the kaleidoscope of the natural world. Richly illustrated with 250 color photographs and anchored by accessible and insightful chapters by esteemed science writer Philip Ball, Patterns in Nature reveals the organization at work in vast and ancient forests, powerful rivers, massing clouds, and coastlines carved out by the sea.

By exploring similarities such as those between a snail shell and the swirling stars of a galaxy, or the branches of a tree and those of a river network, this spectacular visual tour conveys the wonder, beauty, and richness of natural pattern formation.

Praise For Patterns in Nature: Why the Natural World Looks the Way It Does…

"The most beautiful book of 2016."
— Publishers Weekly

"This cofee-table book showcases the spots, stripes, spirals, and fractals and other intricate patterns found in the natural world."
— Live Science

“From tigers’ stripes to the hexagons that make up honeycombs to the ripples in windblown sand, the natural world is full of order and regularity. Science writer Ball investigates the phenomenon in his new book, Patterns in Nature, with 250 photographs of snowflakes, shells, and more. Nature’s patterns follow basic principles of mathematics and physics, leading to similarities in the stripes, spirals, branches and fractals around us. ‘There’s an abundance of detail in nature that we can’t see,” he says. “Even in what seems unstructured, there’s pattern.’”

“Acclaimed English science writer Ball curates a visually striking, riotously colorful photographic display of the most dramatic examples of the ‘sheer splendor’ of physical patterns in the natural world. He lightly ties the work together with snippets of scientific history, using bits of physics, chemistry, and mathematics to show that although patterns in living beings can offer clear, functional evolutionary advantages, the small set of design elements that we can see—symmetries, branching fractals, spirals, flowing swirls, spots, and stripes—come from a basic set of organizing properties of growth and equilibrium seeking. . . . This is formidable eye candy for the I-love-science crowd, sure to spark a sense of impressed wonder at the beauty of our universe and our ability to photograph it.”

“This captivating book is a collection of stunning photographs that capture frequently repeating mathematical patterns in nature. These images depict patterns in living things, from pollen to animals, and in non-living things, from lightning to landscapes. Images are accompanied by brief, but clear, explanations for how these patterns can be generated by Fibonacci ratios, suggesting they result from simple self-organization. Excellent coffee table companion to the author’s earlier Nature’s Patterns: A Tapestry in Three Parts series, which describe in detail how physics and chemistry influence and interweave with evolution (biology) to create patterns and symmetry in nature. This book is a visual feast that can serve as a source of wonder and inspiration for artists and naturalists as well as scientists.”

Philip Ball is a freelance writer and broadcaster, and was an editor at Nature for more than twenty years. He writes regularly in the scientific and popular media and has written many books on the interactions of the sciences, the arts, and wider culture, including H2O: A Biography of Water and The Music Instinct. His book Critical Mass won the 2005 Aventis Prize for Science Books. Ball is also a presenter of Science Stories, the BBC Radio 4 series on the history of science. He trained as a chemist at the University of Oxford and as a physicist at the University of Bristol. He lives in London.
Loading...
or support indie stores by buying on
(This book is on backorder)