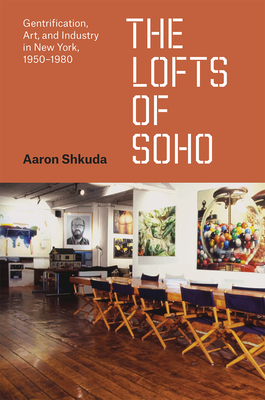 The Lofts of SoHo (Hardcover)

American cities entered a new phase when, beginning in the 1950s, artists and developers looked upon a decaying industrial zone in Lower Manhattan and saw, not blight, but opportunity: cheap rents, lax regulation, and wide open spaces. Thus, SoHo was born. From 1960 to 1980, residents transformed the industrial neighborhood into an artist district, creating the conditions under which it evolved into an upper-income, gentrified area. Introducing the idea—still potent in city planning today—that art could be harnessed to drive municipal prosperity, SoHo was the forerunner of gentrified districts in cities nationwide, spawning the notion of the creative class.

In The Lofts of SoHo, Aaron Shkuda studies the transition of the district from industrial space to artists’ enclave to affluent residential area, focusing on the legacy of urban renewal in and around SoHo and the growth of artist-led redevelopment. Shkuda explores conflicts between residents and property owners and analyzes the city’s embrace of the once-illegal loft conversion as an urban development strategy. As Shkuda explains, artists eventually lost control of SoHo’s development, but over several decades they nonetheless forced scholars, policymakers, and the general public to take them seriously as critical actors in the twentieth-century American city.

Aaron Shkuda is project manager of the Princeton-Mellon Initiative in Architecture, Urbanism, and the Humanities at Princeton University. He lives in New Jersey.

Praise For The Lofts of SoHo: Gentrification, Art, and Industry in New York, 1950–1980 (Historical Studies of Urban America)…

“In The Lofts of SoHo, historian Shkuda demolishes the stick-figure myth of pioneering artists, greedy landlords, and entitled professionals and illuminates the complexity of gentrification. In doing so, he reveals the origins of the idea that the arts possess the capacity to revitalize derelict city districts.”
— Los Angeles Review of Books

“The transformation of industrial districts into expensive real estate is often what developers and planners have in mind when they talk about ‘Soho-ization,’ but Shkuda insists that the process upon which many future rehabilitation plans have been based was itself never planned. Rather, SoHo’s history needs to be reconsidered in the context of the sociopolitical and economic landscape of the mid-century city. The Lofts of SoHo is a welcome addition to the field of urban history, offering an engaging narrative of a contest over space and the unintended consequences of the politicization of real estate.”
— Journal of Social History

“The Lofts of Soho examines the tangled commercial, governmental, and artistic forces that sought to remake the area south of Houston Street and north of Canal Street.”
— Hyperallergic

“An impressive amount of historical detail and argumentative clarity. . . .The achievement and strength of Shkuda’s book lies in its very detailed account of the history of artist-led urban redevelopment and eventual gentrification in SoHo.”
— KULT_online

“The Lofts of SoHo is a groundbreaking work that reshapes existing literature on deindustrialization and urban decline. It’s a fascinating work of cultural history and one of the few urban history monographs to look at gentrification. Shkuda gives readers an engaging and richly detailed text that tells a compelling and original story.”
— Suleiman Osman, George Washington University

“Shkuda has written a careful and balanced history of New York City’s famous SoHo neighborhood that demonstrates that the actions of individuals, not large forces, created this prototypical artists’ district and popularized the quintessential urban dwelling—the loft—both of which have inspired countless imitations across the United States. Artists, Shkuda reveals, led the transformation of the old industrial district by seeking out the vacant factory lofts in which to live and work, lobbying the government to allow them to reside in the industrial zone, and creating fashionable-looking living spaces that would soon become the symbol of hip urbanity. Going beyond ideological stereotypes, Shkuda traces the chain of attraction that triggered gentrification. To be near SoHo’s artists, entrepreneurs set up art galleries and creative boutiques, which in turn lured hordes of visitors who came to see the art and enjoy the ambience; only then did the developers arrive and rents soar. Lofts of SoHo illuminates the way that artists searching for inexpensive spaces in the city have revived city neighborhoods and in the process created an alternative form of urban redevelopment.”
— Alexander von Hoffman, Harvard Graduate School of Design

“Thoughtful and erudite, Shkuda’s remarkable book on the transformation of SoHo offers a wholly new and fascinating perspective on the economic, cultural, and political forces at play. The implications of Shkuda’s book extend far beyond the neighborhood of study and right into the very heart of the debate around the arts and neighborhood development.”
— Elizabeth Currid-Halkett, University of Southern California
or
Buy Here
Copyright © 2020 American Booksellers Association