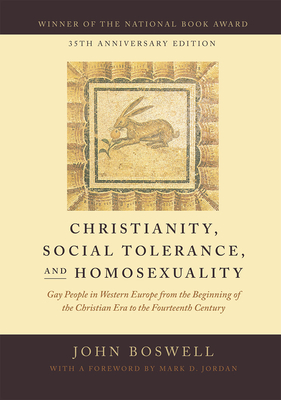 John Boswell’s National Book Award–winning study of the history of attitudes toward homosexuality in the early Christian West was a groundbreaking work that challenged preconceptions about the Church’s past relationship to its gay members—among them priests, bishops, and even saints—when it was first published thirty-five years ago. The historical breadth of Boswell’s research (from the Greeks to Aquinas) and the variety of sources consulted make this one of the most extensive treatments of any single aspect of Western social history.

Now in this thirty-fifth anniversary edition with a new foreword by leading queer and religious studies scholar Mark D. Jordan, Christianity, Social Tolerance, and Homosexuality is still fiercely relevant. This landmark book helped form the disciplines of gay and gender studies, and it continues to illuminate the origins and operations of intolerance as a social force.


Praise For Christianity, Social Tolerance, and Homosexuality: Gay People in Western Europe from the Beginning of the Christian Era to the Fourteenth Century…

“I would not hesitate to call his book revolutionary for it tells of things heretofore unimagined and sets a standard of excellence that one would have thought impossible in the treatment of an issue so large, uncharted and vexed. . . . Boswell has mastered one of the rarest skills: the ability to write about sex with genuine wit. Improbably as it might seem, this work of unrelenting scholarship and high intellectual drama is also thoroughly entertaining.”
— New York Times Book Review

"What makes this work so exciting is not simply its content—fascinating though that is—but its revolutionary challenge to some of Western culture's most familiar moral assumptions."
— Newsweek

“One day, when all churches accept the presence and achievements of gay people with approbation instead of denial or disapproval, Boswell will in no small way be responsible.”
— Gay & Lesbian Review

John Boswell (1947-94) was the A. Whitney Griswold Professor of History at Yale University and the author of The Royal Treasure, The Kindness of Strangers, and Same-Sex Unions in Premodern Europe.
Loading...
or
Not Currently Available for Direct Purchase