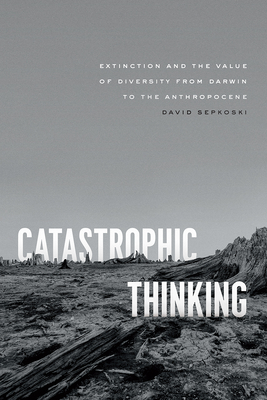 Extinction and the Value of Diversity from Darwin to the Anthropocene (science.culture)

We live in an age in which we are repeatedly reminded—by scientists, by the media, by popular culture—of the looming threat of mass extinction. We’re told that human activity is currently producing a sixth mass extinction, perhaps of even greater magnitude than the five previous geological catastrophes that drastically altered life on Earth. Indeed, there is a very real concern that the human species may itself be poised to go the way of the dinosaurs, victims of the most recent mass extinction some 65 million years ago.

How we interpret the causes and consequences of extinction and their ensuing moral imperatives is deeply embedded in the cultural values of any given historical moment. And, as David Sepkoski reveals, the history of scientific ideas about extinction over the past two hundred years—as both a past and a current process—is implicated in major changes in the way Western society has approached biological and cultural diversity. It seems self-evident to most of us that diverse ecosystems and societies are intrinsically valuable, but the current fascination with diversity is a relatively recent phenomenon. In fact, the way we value diversity depends crucially on our sense that it is precarious—that it is something actively threatened, and that its loss could have profound consequences. In Catastrophic Thinking, Sepkoski uncovers how and why we learned to value diversity as a precious resource at the same time as we learned to think catastrophically about extinction.


Praise For Catastrophic Thinking: Extinction and the Value of Diversity from Darwin to the Anthropocene (science.culture)…

"Catastrophic Thinking presents the best introductory account of how the idea of species-wide loss was conceived and established in scientific circles. . . . [Sepkoski] convincingly suggests that ideas about extinction in each historical period reflect broader social and cultural concerns in the modern world, from the intimate connections between extinction and imperialism to current concerns about the global biodiversity crisis. . . . Extinction is no longer a specialized concern. In this climate, David Sepkoski’s accessible guide is most welcome."
— Times Literary Supplement

"Convincingly demonstrates that an ecological perspective has profoundly shaped our views of biological and social communities. . . . Sepkoski's magisterial work will hopefully serve as an inspiration for more comprehensive histories of the concept of diversity. . . . Catastrophic Thinking is essential reading for those seeking to understand the origin of one of the most powerful concepts under consideration today."
— Science

"A brilliant examination of an urgent subject, with lessons not just for addressing mass extinction but also for reckoning with the intellectual background against which we have failed to do so. Sepkoski is a scientific Maurice Sendak, conjuring a strange world in which the wild things are not the lost animals and plants of the earth’s past so much as the scientists clamouring to study—if not save—them. . . . This book uncovers a pattern of stasis and rupture; ideas, like species, thrive for a time, only to see the context in which they thrived wiped out. Arriving at this particular moment, in a world stalked by extremists and stoked by a profit-driven public square, Sepkoski’s account of where the wild things went makes perfect sense. In an age of rupture, what other way could it have been written? To paraphrase one of Sepkoski’s own sources: Catastrophic Thinking is the extinction story our era deserves."
— Social History of Medicine

"Excellent. . . . Catastrophic Thinking is a closely argued, gracefully written book. In fact, it might even be regarded as several books in one: as a history of extinction science, an essay on the origin of a social value, and more subtlety, a piece of cultural criticism. These elements blend together almost seamlessly. Sepkoski achieves just the right mix of historical detachment, scientific sophistication and cultural perceptiveness to carry off his ambitious project. There are plenty of surprises for the reader along the way, and not a little wisdom. In our present age of catastrophes and catastrophizing, it deserves a wide and enthusiastic readership."
— Metascience

"Far from a dry recitation of the scientific literature, Sepkoski's meta-analysis of extinction and biological diversity foregrounds ideas and rhetorical choices. . . . Lucidly written and keenly personal, Catastrophic Thinking is engaging from beginning to end. . . . Sepkoski delineates new territory in the discourse of extinction by reviewing and revisiting the most important scientific figures and literature (popular and academic) of each era since catastrophic thinking took hold of the Western imaginary. Readers interested in the scientific history of extinction as a modern concept, particularly as it was formed by human institutions, will find much of interest in Sepkoski's book."
— Isis: A Journal of the History of Science Society

"This book is impeccably researched, and—rather than a popular science book—does not repackage and distil others' work but provides a novel, academic argument. This fresh take on how we collectively see extinction—and its flipside, loss of diversity—will help readers understand and contextualise the current crisis and the Anthropocene. Sepkoski will give many pause to reflect not just on how our research is influenced by our broader culture, but also how important it is to influence and impact society and politics: to move the needle on the climate and biodiversity crises. . . . Buy a copy of Catastrophic Thinking to better understand—and even be inspired to change—these terrifying times we are living in."
— Holocene

"Timely and fascinating. . . . This is a fabulous book, expertly weaving cultural and intellectual history into a rich tapestry of ideas about loss, precarity, and diversity, whose relevance and significance can hardly be overstated. Sepkoski takes readers on an eye-opening journey into a history that remains surprisingly little known despite its obvious importance given the catastrophic biodiversity crisis we currently face. It's an absolute pleasure to read."
— Lukas Rieppel, New Books in Science, Technology, and Society

"How do humans perceive the nature of extinction, and how has that shaped how humans perceive each other and aspects of society? This thought-provoking book examines those questions and reveals how knowing that we can lose something forever—and the realization that extinction comes with cultural and ecological costs—motivates us to protect everything else."
— Revelator

"Sepkoski has written a book that is as dynamic and paradoxical as extinction and diversity themselves. This is a book about extinction and death, but also about diversity and life. Although extinction is a potentially bleak and distressing territory, Sepkoski guides the reader faithfully through it. . . . He transforms the trenches of extinction into navigable terrain for the reader who is willing to consider their own role in the history of extinction."
— Environment and History

"Catastrophic Thinking stands out for the depth of its scholarship. . . . [The book] is positively bristling with fascinating insights. Obviously, this is a must-read for science historians, but palaeontologists and evolutionary biologists interested in the history of their discipline can also safely pick this up. Furthermore, thanks to the compelling arguments and accessible writing, this book should appeal strongly outside of these disciplines to anyone with an interest in palaeontology, evolution, or mass extinctions."
— Inquisitive Biologist

"A solid introduction to one of the most critical issues of today. . . . Recommended."
— Choice

"In his wise and meticulously argued new book, Sepkoski explains why every era gets the dinosaur story it deserves, how the threat to biodiversity helped fashion cultural diversity into an ideal, and why extinction has become personal to each and every one of us. An urgent and brilliant exemplar of history of science at its very best, Catastrophic Thinking beautifully shows that the ways we construct the past are always reflections of our hopes and fears for the future."
— Oren Harman, author of Evolutions: Fifteen Myths That Explain Our World

"An authoritative, compelling, and insightful account of how biological and cultural diversity has come to be so highly prized in contemporary Western society. This is a definitive history of the cultural and scientific developments, especially in paleontology, that have helped forge our sense of the modern biodiversity crisis. Lucid, historically sweeping, and accessible, Sepkoski's book ably reconstructs key aspects of the larger culture in which ideas about extinction, catastrophe, and diversity emerged."
— Mark V. Barrow, Jr., Virginia Tech

David Sepkoski is the Thomas M. Siebel Chair in the History of Science at the University of Illinois at Urbana-Champaign. He is the author of several books, most recently Rereading the Fossil Record: The Growth of Paleobiology as an Evolutionary Discipline, also published by the University of Chicago Press.
Loading...
or support indie stores by buying on