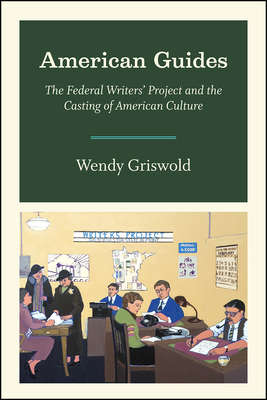 The Federal Writers' Project and the Casting of American Culture

In the midst of the Great Depression, Americans were nearly universally literate—and they were hungry for the written word. Magazines, novels, and newspapers littered the floors of parlors and tenements alike. With an eye to this market and as a response to devastating unemployment, Roosevelt’s Works Progress Administration created the Federal Writers’ Project. The Project’s mission was simple: jobs. But, as Wendy Griswold shows in the lively and persuasive American Guides, the Project had a profound—and unintended—cultural impact that went far beyond the writers’ paychecks.

Griswold’s subject here is the Project’s American Guides, an impressively produced series that set out not only to direct travelers on which routes to take and what to see throughout the country, but also to celebrate the distinctive characteristics of each individual state. Griswold finds that the series unintentionally diversified American literary culture’s cast of characters—promoting women, minority, and rural writers—while it also institutionalized the innovative idea that American culture comes in state-shaped boxes. Griswold’s story alters our customary ideas about cultural change as a gradual process, revealing how diversity is often the result of politically strategic decisions and bureaucratic logic, as well as of the conflicts between snobbish metropolitan intellectuals and stubborn locals. American Guides reveals the significance of cultural federalism and the indelible impact that the Federal Writers’ Project continues to have on the American literary landscape.

Wendy Griswold is professor of sociology and the Bergen Evans Professor in the Humanities at Northwestern University.

Praise For American Guides: The Federal Writers' Project and the Casting of American Culture…

“American Guides is a fascinating, wonderfully intricate tale of the politics of the New Deal, of the odd and interesting state of American authors and their organizations, of the people panicked at left-wing subversion, and much more. Throughout, Griswold brilliantly analyzes the casting of American culture and illuminates the major ways that cultural change happens—because of institutional imperatives with almost entirely unintended cultural effects.”
— Elizabeth Long, Rice University

“An inspired book. Griswold ingeniously marshals the evidence and constructs a persuasive argument for the significance of the American Guides series. Along the way, she advances an intriguing sociological model of cultural production, placing new emphasis on the ad hoc and the accidental, and allowing for the unintentional invention of cultural ‘molds’ prior to the emergence of cultural and ideological content to fill them. American Guides will find readers across a range of disciplines, including sociology, literature, and U.S. history.”
— James F. English, University of Pennsylvania

“American Guides offers a richly detailed, rigorous, and sophisticated account of cultural production in keeping with Griswold’s previous work. It will be of interest to sociologists generally and especially to sociologists of culture and scholars working on the history of the book, material culture, mobility, leisure, elites, regionalism, and nationalism.”
— American Journal of Sociology

“In this superb study, Griswold examines one of the most fascinating cultural projects of the twentieth century—the American Guide books that emerged from the Federal Writers’ Project in the 1930s. In so doing, she lays bare the forces that shaped American culture and society at a decisive moment in American history. By ‘casting culture’ in ‘state-shaped molds,’ the guide books and their extraordinary authors redefined and invigorated American culture in lasting ways. As Griswold demonstrates so brilliantly, the writers and their guides captured the nation’s diversity in fresh ways and in so doing introduced Americans to their own country.”
— Ellen Fitzpatrick, University of New Hampshire

“Griswold’s ‘casting’ explanation of the Guides project is compelling and forceful. . . . American Guides interweaves empirical research and deft analysis, fact and creativity, and provides us a brand new way to see the United States.”
— Los Angeles Review of Books

“Depression-era New Deal agencies are often forgotten by students, as well as by some historians. Sociologist Griswold, however, researched one agency of the Works Progress Administration’s Federal Writers' Project that gave unemployed individuals work writing state guides for those who could take to the highways to tour some of the various states’ attractions. Recommended.”
— Choice
or
Not Currently Available for Direct Purchase
Copyright © 2020 American Booksellers Association