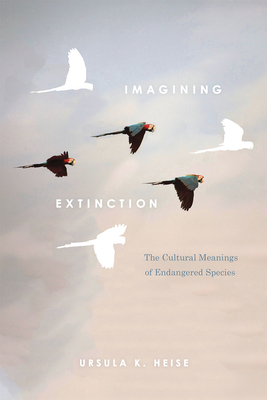 The Cultural Meanings of Endangered Species

We are currently facing the sixth mass extinction of species in the history of life on Earth, biologists claim—the first one caused by humans. Activists, filmmakers, writers, and artists are seeking to bring the crisis to the public’s attention through stories and images that use the strategies of elegy, tragedy, epic, and even comedy. Imagining Extinction is the first book to examine the cultural frameworks shaping these narratives and images.

Ursula K. Heise argues that understanding these stories and symbols is indispensable for any effective advocacy on behalf of endangered species. More than that, she shows how biodiversity conservation, even and especially in its scientific and legal dimensions, is shaped by cultural assumptions about what is valuable in nature and what is not. These assumptions are hardwired into even seemingly neutral tools such as biodiversity databases and laws for the protection of endangered species. Heise shows that the conflicts and convergences of biodiversity conservation with animal welfare advocacy, environmental justice, and discussions about the Anthropocene open up a new vision of multispecies justice. Ultimately, Imagining Extinction demonstrates that biodiversity, endangered species, and extinction are not only scientific questions but issues of histories, cultures, and values.

Ursula K. Heise is the Marcia H. Howard Chair in Literary Studies in the Department of English and the Institute of the Environment and Sustainability at the University of California, Los Angeles. Her books include Chronoschisms: Time, Narrative, and Postmodernism and Sense of Place and Sense of Planet: The Environmental Imagination of the Global.

Praise For Imagining Extinction: The Cultural Meanings of Endangered Species…

“Heise is the leading ecocritic of her generation. Any serious-minded person with a concern for the longstanding but accelerating plight of endangered nonhuman species—and how to make sense of its history and possible futures as an urgent cultural predicament—is certain to profit from reading Imagining Extinction.”
— Lawrence Buell, Harvard University

“Imagining Extinction shows Heise working at the height of her powers, traversing a formidable range of charged ecological-cultural issues that include mass species extinctions and rapid loss of biodiversity; global climate change; narrative ‘templates’ that structure how cultures care about, and tell stories about, other species; the rise of biodiversity databases; biodiversity laws; and animal rights. This book is elegantly written, cogently organized, and comprehensively researched.”
— Nicole Shukin, University of Victoria

"Ursula Heise, who takes the time to unravel the philosophical contradictions that riddle the field with landmines. She’s very good at asking difficult questions. . . . Her book breaks interesting ground, examining the role of archives and databases as cultural mechanisms for establishing meaning as important as science fiction, ethnography, and theories of justice. All of these are woven together in the book, producing some refreshing new ways of thinking about our predicament."

"A nuanced re-visioning of extinction discourse, inflected powerfully by literary traditions ranging from elegy to epic. . . . Bound by temporal division, suggests Heise, only the human imagination can seemingly inspire the kind of social and political action championed by environmentalists and scientists alike. . . .  Imagining Extinction persuasively advocates for the centrality of the literary, the anthropological, the historical, and the psychological in coding and recoding our present considerations of extinction and the Anthropocene. Repeatedly, Heise draws our attention to 'the stories we tell about ourselves.' Perhaps this, after all, is the humanities’ calling. Writing and rewriting stories about who we are, where we are, why we are. And yet, in the same way that I do not want the humanities reduced to a single function, I would also not want to reduce Heise’s Imagining Extinction to a single application. Self-consciously, the text seems crafted in order to lend itself to alliances far beyond a single discourse or discipline. Extinction, after all, is by its present definition uncontained and uncontainable."

"As a framework, multispecies justice attends to the ways in which cultural, socio-political, economic, and historical differences have shaped our thinking about human and non-human communities, as well as our relations to biological and ecological differences. The hope–as Heise’s work indicates--is that it may serve as a starting point for telling different stories and imagining a better future."
— Tranimacies

“This ambitious study covers extensive intellectual ground. The author’s goal is not to understand what endangered species and extinction mean biologically but to move toward understanding what they do (and perhaps to learn what they could eventually come to) mean culturally—or, in her words, ‘how they mean culturally.’ That distinction does not and should not be taken as an indication that this book does not represent relevant reading for biologists. It does, although it is equally relevant for anyone concerned about biodiversity and the environment.”
— The Quarterly Review of Biology

“The range of Heise’s analyses and the care with which she maintains her critical distance are remarkably impressive. . . . Imagining Extinction is a crisp, consistently intelligent study which helps us to think through extinction and the loss of biodiversity, but also how to negotiate and respect cultural difference, and how, practically, to extend that consideration to other living beings.”

— The British Society for Literature and Science

"In Imagining Extinction, Heise reads for extinction story templates across last-of-its-kind narratives, biodiversity databases, endangered species laws, and contemporary speculative fiction, along with other genres and media....Heise deftly lays pathways that environmental humanities scholars will tread for the foreseeable future. Her questions assume the primacy of narrative, but they also push literary and cultural scholars to deploy their skills of apprehension, discernment, analysis, and articulation across a wide range of disciplinary boundaries. They also offer incredibly useful anchors for teaching, in particular for helping students think about intersectional structures of oppression that encompass human and nonhuman creatures and their habitats."
— American Literary History

"Heise’s book sets itself apart from the basic premise of much of the extant literature on this topic. Rather than declaring it to be ‘imperative that we should care’, Heise asserts that the omnipresence of images of endangered and extinct species makes it abundantly clear that we do care, such that ‘why conservation matters and how it might be fostered’ are the issues at stake....Imagining Extinction is precise in the work that it does with individual ‘texts’ (broadly conceived). What is more, the demonstration that environmental narratives are first and foremost cultural rather than scientific across a very wide range of material blasts open new fields of enquiry for others to work in henceforth."
— European Journal of American Culture
or
Not Currently Available for Direct Purchase
Copyright © 2020 American Booksellers Association