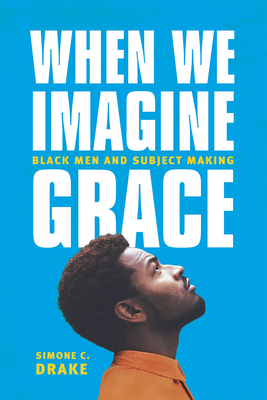 When We Imagine Grace (Paperback)

Simone C. Drake spent the first several decades of her life learning how to love and protect herself, a black woman, from the systems designed to facilitate her harm and marginalization. But when she gave birth to the first of her three sons, she quickly learned that black boys would need protection from these very same systems—systems dead set on the static, homogenous representations of black masculinity perpetuated in the media and our cultural discourse.

In When We Imagine Grace, Drake borrows from Toni Morrison’s Beloved to bring imagination to the center of black masculinity studies—allowing individual black men to exempt themselves and their fates from a hateful, ignorant society and open themselves up as active agents at the center of their own stories. Against a backdrop of crisis, Drake brings forth the narratives of black men who have imagined grace for themselves. We meet African American cowboy, Nat Love, and Drake’s own grandfather, who served in the first black military unit to fight in World War II. Synthesizing black feminist and black masculinity studies, Drake analyzes black fathers and daughters, the valorization of black criminals, the black entrepreneurial pursuits of Marcus Garvey, Berry Gordy, and Jay-Z, and the denigration and celebration of gay black men: Cornelius Eady, Antoine Dodson, and Kehinde Wiley. With a powerful command of its subjects and a passionate dedication to hope, When We Imagine Grace gives us a new way of seeing and knowing black masculinity—sophisticated in concept and bracingly vivid in telling.

Simone C. Drake is associate professor of African American and African studies at Ohio State University. She is the author of Critical Appropriations: African American Women and the Construction of Transnational Identity.

Praise For When We Imagine Grace: Black Men and Subject Making…

“Drake masterfully intersects the personal, political, and cultural in smart and useful ways, providing us with new critical models to negotiate discourses of black crisis/pathology that drive public policy, legitimize racist judicial/policing practices, and criminalize black bodies. She usefully moves us from the past to the present, highlighting the ways that different generations of black men have expanded the definition of masculinity, human agency, and self-determination, and by default challenged the white supremacist pathologizing of black men. This is an important and necessary intervention in black masculinity studies.”
— David Ikard, author of Breaking The Silence: Toward a Black Male Feminist Criticism

“With When We Imagine Grace, Drake offers brilliant insight into the subjectivities that Black men craft for themselves, often against the grain of misrepresentation, and in the process establishes herself as an important critical voice.”
— Mark Anthony Neal, author of Looking for Leroy: Illegible Black Masculinities

“When We Imagine Grace brings together diverse texts and rich modes of analysis, providing a necessary conversation about black men’s historical and contemporary creative imaginings of self. This book is a testament of the possible synergies between black feminism and black masculinity studies.”
— Jeffrey Q. McCune, Jr., author of Sexual Discretion: Black Masculinity and the Politics of Passing

“Drake seeks to complicate this narrative of perennial black male ‘crisis,’ victimhood, and pathology by contemplating a ‘repair effort’ that is inclusive of black women’s experiences. She criticizes the notion of the singularity of black men’s victimization and the idea that in order to prove one’s manhood and ‘be a man,’ one must be a certain kind of man. Can there be progressive black masculinities? Imagining something different from patriarchy would involve imagination and self-love. Inspired by Baby Suggs in Toni Morrison’s Beloved, Drake calls this act of imagination ‘grace.’ Thought provoking. Readers who like literary criticism will enjoy this book. Recommended.”
— Choice

“Crucial for readers of all races.”
— Christian Century
or
Not Currently Available for Direct Purchase
Copyright © 2020 American Booksellers Association