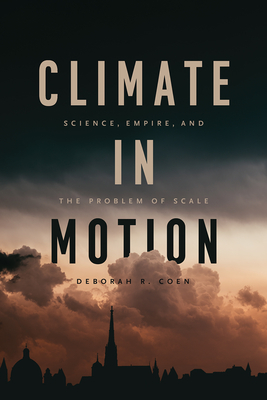 Science, Empire, and the Problem of Scale

Today, predicting the impact of human activities on the earth’s climate hinges on tracking interactions among phenomena of radically different dimensions, from the molecular to the planetary. Climate in Motion shows that this multiscalar, multicausal framework emerged well before computers and satellites. Extending the history of modern climate science back into the nineteenth century, Deborah R. Coen uncovers its roots in the politics of empire-building in central and eastern Europe. She argues that essential elements of the modern understanding of climate arose as a means of thinking across scales in a state—the multinational Habsburg Monarchy, a patchwork of medieval kingdoms and modern laws—where such thinking was a political imperative. Led by Julius Hann in Vienna, Habsburg scientists were the first to investigate precisely how local winds and storms might be related to the general circulation of the earth’s atmosphere as a whole. Linking Habsburg climatology to the political and artistic experiments of late imperial Austria, Coen grounds the seemingly esoteric science of the atmosphere in the everyday experiences of an earlier era of globalization. Climate in Motion presents the history of modern climate science as a history of “scaling”—that is, the embodied work of moving between different frameworks for measuring the world. In this way, it offers a critical historical perspective on the concepts of scale that structure thinking about the climate crisis today and the range of possibilities for responding to it.

Praise For Climate in Motion: Science, Empire, and the Problem of Scale…

"Conducts a detailed examination of the scientific community of the Austro-Hungarian empire to study its significant contributions to the study of global climatology. . . . Coen provides an excellent, well-researched argument for the beginnings of modern climatology and its ongoing interconnection to the political landscape. . . . Highly recommended."
— CHOICE

"Coen illuminates both the emotional and intellectual lives of her subjects. Climate in Motion pays close and welcome attention to the human experience of trying to understand the global climate . . . . These are hidden, nearly invisible currents, discovered by Coen in almost illegible letters and diaries. But they are a powerful reminder that understanding rarely comes quickly or easily, especially when the mysteries are both larger and smaller than previously imagined."
— New York Review of Books

“Historians are fond of saying that science is embedded in the context of a specific time and place. Coen demonstrates this unequivocally. . . . The fact that climatology was born of a context of politics and policy, and was never far from them during its development, merits exactly this sort of examination as we wrestle with the ramifications of climate science today.”
— Nature

"As the Yale historian Deborah Coen reveals in her inspiring and inventive new book Climate in Motion: Science, Empire, and the Problem of Scale, we owe the foundations of modern climate science to a forgotten cadre of Central European Earth scientists. . . .The Habsburgs needed to transform considerable linguistic and political diversity into a feeling of imperial unity, to make local experience meaningful as part of the whole. The state’s existential challenge was an intellectual quandary for climate scientists such as Kerner and Hann, who spent their careers explaining how and why flowering azaleas and other local phenomena mattered for the planet’s climate in general. In other words, and this is the hinge of Coen’s masterful argument, scaling was a salient political problem no less than a scientific one for the researchers and rulers of Habsburg Europe."
— The Atlantic

"Today, the field of dynamic climatology enables us to understand major interactions across space and time, on scales ranging from the human to the planetary. But where can we find the origins of this crucial approach? In this dazzling piece of historical detective work, Deborah Coen traces it back to researchers such as Julius Hann in Vienna and the practical problems faced by the Habsburg Monarchy in administering its vast and varied territories."
— Times Higher Education

"What Deborah Coen calls 'the problem of scale' is familiar to us today as we confront the challenges of anthropogenic climate change. In her captivating new book, Climate in Motion, Coen shows how, in the Austro-Hungarian empire in the nineteenth century, the field of dynamic climatology had already evolved ways of accounting for problems of multiple layers and scales."
— Times Literary Supplement

"Skilfully blends the history of science in the late Habsburg Empire and the political history of the Empire itself. . . . Historians of science will learn much from Coen’s chapters on the invention of climatography, the shift in climate theory from a Humboldtian conception of competing oceanic and continental wind currents to one based on thermodynamics, and the effort in the late nineteenth and early twentieth centuries to explain atmospheric turbulence, including storms, with the help of experimental simulations in the laboratory, which continued after the fall of the Empire. Coen’s clear account of these topics benefits from her earlier training in the history of physics . . . . Clearly, Coen understands that the struggle for acceptance of truly transnational climate science is likely to continue. It is therefore timely to have this well-written, clearly argued reminder that, in a sense, we have been there once before."
— European History Quarterly

"Deserves to be read widely—not only by historians of science, but by anyone concerned with how we might reckon with climate and its changes in the Anthropocene."
— Metascience

"Provides fresh, stimulating, and comprehensive coverage of the rise of dynamic climatology in the Austrian and Austro-Hungarian Empire, and it nicely complements the work of other scholars on the development of climatology elsewhere. Though her book is very much oriented towards today’s environmental concerns, it is also thoroughly historical in its means and analytical presentation."
— Technology and Culture

"Rich and very readable. . . . This book is an extremely thought-provoking read: the journey through the Austro-Hungarian Empire; the description of an emerging science trying to describe complex change; and the portraits of people, place, and institutions using multiple perspectives are all fascinating and have much to offer."
— H-Sci-Med-Tech

"Fascinating and remarkably wide-ranging. . . . Climate in Motion presents a compelling case that Austria-Hungary’s unique geographic and cultural geography fostered new ways of seeing, understanding, and modeling both climate and empire. In doing so, it contributes new insight to multiple historiographies. Environmental historians have long viewed the empire-climate matrix through the lens of overseas (often tropical) environments. Climate in Motion challenges readers to consider not only Austro-Hungarian contributions but also the role of other continental empires."
— Austrian History Yearbook

"An excellent contribution to a variety of historiographical and theoretical conversations. Stuffed with stories, examples, data, images and analysis, Coen covers lots of ground; she also convincingly illustrates that there is a history to what many might see as a modern way of tracking interactions within the earth’s climate. Experts in the field of climatology and Habsburg history should take notice, as should environmental and imperial historians."
— Environment and History

"Coen’s extraordinary, genre-transcending book reinterprets the late Habsburg Empire through the history of its field sciences, especially its inventive, world-leading climatology. Each informed the other’s project of 'scaling': grasping the empire’s dramatic diversity and detail and its largest patterns and circulations simultaneously. Among the most creative and arresting books the history of science has yet produced, this book holds direct and significant lessons for contemporary struggles over climate change and climate knowledge. Coen has written a masterwork."
— Paul N. Edwards, Stanford University

"Coen's book is an inspiring example of what historians could contribute to debates on scalar thinking that the crisis of global warming inevitably provokes. Demonstrating, in deep and delightful detail, how questions of expertise, politics, and aspirations marked not only the lives of pioneering climatologists in the Habsburg monarchy but their science as well, Coen tells a story that beautifully backs up her fundamental argument: that the process of thinking across scales is a learning process and hence open to meaning-making by humans. A remarkable achievement."
— Dipesh Chakrabarty, University of Chicago

“Climate in Motion reveals how the conceptual underpinning of our modern climate science—the zooming in and out of scale from detail to grand pattern—emerged from a surprising and seemingly dusty source: the perceptions and politics of the scientists of Austria-Hungary. Dazzling yet down-to-earth, the writing sparkles with precise insight. Every historian of science and environmental historian should read this book.”
— Conevery Bolton Valencius, Boston College

“Deborah Coen has written a riveting study, brilliantly rendering the untold role played by environmental scientists in legitimating the geographic and multicultural dimensions of the Habsburg Empire. In stylish prose Coen explores how scientists of all kinds in Austria-Hungary pursued simultaneous scales of analysis, consistently validating local perspectives toward natural and cultural phenomena while linking them to broad multi-regional overviews. The distinctive combination of these perspectives produced stunning alternative frameworks for scientific understanding to the highly nationalist perspectives developed by researchers elsewhere in Europe.”
— Pieter M. Judson, European University Institute

“Climate in Motion gives climatology the deep and nuanced history that it lacks in contemporary discussions of global warning and climate change. Little has been written about climatology before the mid-twentieth century or outside the United States, and what is written mostly dismisses early climatologists as charlatans or drudges. Coen puts these claims to rest and shows how the work of nineteenth century climatologists is crucial to what we know about climate change today. She has written a classic, path-breaking, work—arguably the most important book in Austrian environmental history and history of science ever written.”
— Tara Zahra, University of Chicago

Deborah R. Coen is professor of history and chair of Yale University’s Program in the History of Science and Medicine. She is the author of Vienna in the Age of Uncertainty: Science, Liberalism, and Private Life and The Earthquake Observers: Disaster Science from Lisbon to Richter, both published by the University of Chicago Press.