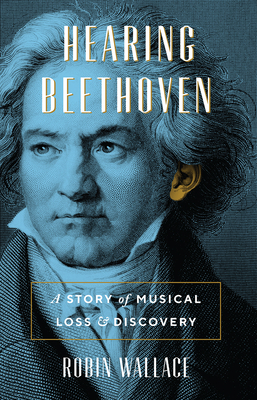 A Story of Musical Loss and Discovery

We’re all familiar with the image of a fierce and scowling Beethoven, struggling doggedly to overcome his rapidly progressing deafness. That Beethoven continued to play and compose for more than a decade after he lost his hearing is often seen as an act of superhuman heroism. But the truth is that Beethoven’s response to his deafness was entirely human. And by demystifying what he did, we can learn a great deal about Beethoven’s music. Perhaps no one is better positioned to help us do so than Robin Wallace, who not only has dedicated his life to the music of Beethoven but also has close personal experience with deafness. One day, at the age of forty-four, Wallace’s late wife, Barbara, found she couldn’t hear out of her right ear—the result of radiation administered to treat a brain tumor early in life. Three years later, she lost hearing in her left ear as well. Over the eight and a half years that remained of her life, despite receiving a cochlear implant, Barbara didn’t overcome her deafness or ever function again like a hearing person.

Wallace shows here that Beethoven didn’t do those things, either. Rather than heroically overcoming his deafness, as we’re commonly led to believe, Beethoven accomplished something even more difficult and challenging: he adapted to his hearing loss and changed the way he interacted with music, revealing important aspects of its very nature in the process. Creating music became for Beethoven a visual and physical process, emanating from visual cues and from instruments that moved and vibrated. His deafness may have slowed him down, but it also led to works of unsurpassed profundity.

Wallace tells the story of Beethoven’s creative life from the inside out, interweaving it with his and Barbara’s experience to reveal aspects that only living with deafness could open up. The resulting insights make Beethoven and his music more accessible, and help us see how a disability can enhance human wholeness and flourishing.


Praise For Hearing Beethoven: A Story of Musical Loss and Discovery…

“Wallace’s striking volume is a detailed, erudite study of the effect of deafness on Beethoven’s music and character, but it is also a deeply personal account of Wallace’s late wife’s experience of deafness. This unlikely combination works beautifully and provides a convincing and moving probe into Beethoven’s essence. Throughout the entire book, one senses the author’s profound love and admiration for his lost wife and for Beethoven himself.”
— Harvey Sachs, author of The Ninth: Beethoven and the World in 1824

“Wallace provides a new and unique perspective on Beethoven's deafness. He combines a gripping and poignant personal narrative with the knowledge and skill of a seasoned researcher and musician. The book both reads like a novel and provides vivid insight into how Beethoven confronted the loss of a composer's most important asset. In weaving the personal and the scholarly, Wallace has created an intimate account of how Beethoven's deafness can be found in his music as well as how it shaped him as a person. In fact, in this book we see the human side of Beethoven in a way that has never before been portrayed.”

“In this pathbreaking book, Wallace demystifies the longstanding romance of Beethoven’s deafness by bridging memoir and musicology in an exciting new way that speaks to a broad audience of readers. Of notable significance is his detailed attention to the innovative means by which Beethoven used his instrument—the piano—to discover and harness the multisensory acuities of his body in the face of his progressive hearing loss, accommodations that afforded a new, experimental orientation towards his musical craft that ultimately led to some of his most celebrated aesthetic breakthroughs.”
— Jessica Holmes, UCLA Herb Alpert School of Music

“This is a special book. Readers interested in Beethoven’s biography will learn many new things, thanks to Robin Wallace’s knowledge and scholarship. But just as valuable is his personal account of his wife Barbara’s deafness, which deeply engages our sympathy and gives us insight into the human condition.”
— Lewis Lockwood, Harvard University

“Wallace offers a probing examination of Beethoven’s creative process and how he turned his hearing loss to his advantage. [He] interweaves the personal experiences of his late wife, Barbara, who also became deaf. . . . [The book] deepens readers’ knowledge of Beethoven’s artistic life while broadening their understanding of hearing and loss. Highly recommended."
— Library Journal

Robin Wallace is professor of musicology at Baylor University. He is the author of Beethoven’s Critics and Take Note: An Introduction to Music through Active Listening.