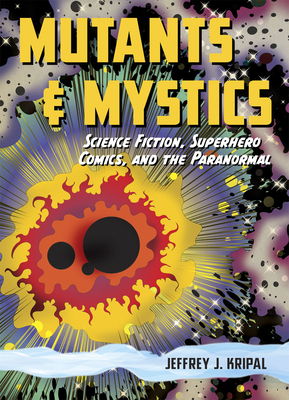 In many ways, twentieth-century America was the land of superheroes and science fiction. From Superman and Batman to the Fantastic Four and the X-Men, these pop-culture juggernauts, with their "powers and abilities far beyond those of mortal men," thrilled readers and audiences—and simultaneously embodied a host of our dreams and fears about modern life and the onrushing future.

But that's just scratching the surface, says Jeffrey Kripal. In Mutants and Mystics, Kripal offers a brilliantly insightful account of how comic book heroes have helped their creators and fans alike explore and express a wealth of paranormal experiences ignored by mainstream science. Delving deeply into the work of major figures in the field—from Jack Kirby’s cosmic superhero sagas and Philip K. Dick’s futuristic head-trips to Alan Moore’s sex magic and Whitley Strieber’s communion with visitors—Kripal shows how creators turned to science fiction to convey the reality of the inexplicable and the paranormal they experienced in their lives. Expanded consciousness found its language in the metaphors of sci-fi—incredible powers, unprecedented mutations, time-loops and vast intergalactic intelligences—and the deeper influences of mythology and religion that these in turn drew from; the wildly creative work that followed caught the imaginations of millions. Moving deftly from Cold War science and Fredric Wertham's anticomics crusade to gnostic revelation and alien abduction, Kripal spins out a hidden history of American culture, rich with mythical themes and shot through with an awareness that there are other realities far beyond our everyday understanding.

A bravura performance, beautifully illustrated in full color throughout and brimming over with incredible personal stories, Mutants and Mystics is that rarest of things: a book that is guaranteed to broaden—and maybe even blow—your mind.

Jeffrey Kripal is the J. Newton Rayzor Professor of Religion and chair of the Department of Religious Studies at Rice University. He is the author of six books, including Esalen: America and the Religion of No Religion and Authors of the Impossible: The Paranormal and the Sacred.


Praise For Mutants and Mystics: Science Fiction, Superhero Comics, and the Paranormal…

"An invigorating read, and a cross-cultural bonanza you never saw coming. Boldly embracing the enigmatic Id, Jeffrey Kripal has gathered the silver threads of grand mythologies, sacred texts, and mystical creeds, binding them to the visionary Super-Ego at the heart of modern literature’s bastard sons--comic books and science fiction."

"Mutants and Mystics chronicles the emergence of a complex and startlingly dangerous energy in our world.  Because we don't know what it is, we identify it as paranormal. But perhaps what it should really be called is 'abnormally powerful,' for, as Jeff Kripal reveals with satisfying skill in this book, it has come to define the very essence of the popular imagination. Instead of fairies and sylphs and gorgons, our rationalist world is defied by a folklore of superheroes, supervillains, and dangerous strangers, and, as I know all too well, can be shattered by them in some very real ways. Mutants and Mystics is the first book that shines the light of reason and insight into this swarming forest. As a wanderer here, I found the light that poured from these pages as blessed as it is breathtaking."

"For most of the history of popular culture, the creators and the academics--the storytellers and the scholars--have sat in different rooms, in different houses, virtually on different worlds, having virtually no contact with each other. Even when the professors began to discover the secret, inner meanings and contexts of B-movies and comic books and science-fiction pulps, there was little contact between the classroom and the creators.  Now, however, Jeffrey J. Kripal has come along--both analyst and aficionado, examiner and enthusiast. He bridges the gap between spirituality and its sometimes seedy outcroppings in pop culture, and forges—or rather, reveals--a synthesis that was really there all along, if so many guys with PhD’s hadn't had a vested interest in not recognizing it. More power to him, I say! Or rather--more super-power!"

"Jeffrey Kripal is not only serious about some very strange stuff in Mutants and Mystics, he is seriously smart and singularly thought-provoking about it. Trust me, I've been there and this book is an excellent guide, maybe even a new map of mysterious terrain first charted in antiquity. Always scholarly yet never stuffy, always fun but never superficial, Mutants and Mystics makes a solid case for contemplating ancient myth as secret (if garbled) history and demonstrates how that myth/history is perpetuated in pop culture, whether today's creators are fully aware of what they're doing or not."

— Doug Moench, author of Batman and The Big Book of the Unexplained

"The message is that we need to step backwards from our culture to see these hidden patterns, and in this endeavor Kripal provides new maps of the secret world of superpowers. To access these deep strata of reality and to achieve a measure of self-realisation, we need to embrace this strangeness and not be frightened of it. . . . Kripal has a lively style and a deep love of (perhaps reverence for) his subject matter."
— Fortean Times