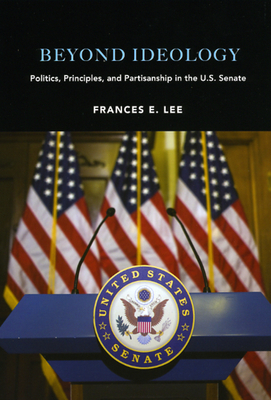 Politics, Principles, and Partisanship in the U. S. Senate

The congressional agenda, Frances Lee contends, includes many issues about which liberals and conservatives generally agree. Even over these matters, though, Democratic and Republican senators tend to fight with each other. What explains this discord? Beyond Ideology argues that many partisan battles are rooted in competition for power rather than disagreement over the rightful role of government.

The first book to systematically distinguish Senate disputes centering on ideological questions from the large proportion of them that do not, this volume foregrounds the role of power struggle in partisan conflict. Presidential leadership, for example, inherently polarizes legislators who can influence public opinion of the president and his party by how they handle his agenda. Senators also exploit good government measures and floor debate to embarrass opponents and burnish their own party’s image—even when the issues involved are broadly supported or low-stakes. Moreover, Lee contends, the congressional agenda itself amplifies conflict by increasingly focusing on issues that reliably differentiate the parties. With the new president pledging to stem the tide of partisan polarization, Beyond Ideology provides a timely taxonomy of exactly what stands in his way.


Praise For Beyond Ideology: Politics, Principles, and Partisanship in the U. S. Senate…

"[Lee] forcefully and convincingly argues that most partisan battles, at least in the Senate, are rooted in competition for collective partisan institutional advantage as well as individual power within that institution. Thus, it is not surprising that senators often sponsor measures and/or engage in floor debates to embarrass their opponents and enhance their own party images. Here is strong evidence that certainly the Senate—and most likely the House as well—are failed institutions and out of control."
— Choice

Frances E. Lee is professor of politics and public affairs at Princeton University. Her previous books include Insecure Majorities: Congress and the Perpetual Campaign and Beyond Ideology: Politics, Principles and Partisanship in the U.S. Senate